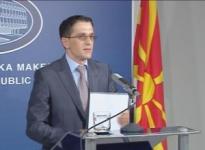 Blaze Ristovski, the chief editor of the controversial Macedonian encyclopaedia, which enraged the country’s ethnic Albanians, is resisting government pressure to resign.

Upon its publication in September, the state-funded tome, prepared by the Macedonian Academy of Sciences and Arts, MANU, came under fire domestically and in neighbouring states for describing ethnic Albanians as “settlers” and “Shiptari” – a pejorative.

“It makes sense that, after an incident like this, someone should take responsibility. Blaze Ristovski is at the top of the pyramid,” government spokesperson Shefik Duraki told reporters on Sunday.

“As a government, we expect that the least he could do is to resign, if not for other than moral reasons,” Duraki said.

In a statement given to Alsat M TV, Ristevski rebuffed the government’s call.

“No government or political party can, or has the right to ask for my resignation,” Ristovski said, arguing that his work and the responsibility of his position has to do with science and not politics.

Last week, the MANU withdrew the disputed edition. Macedonian President Georgi Ivanov and US, EU and UK representatives in the country applauded the move, saying it should help ease rising ethnic tensions.