Albania and Serbia in Diplomatic Flirtation 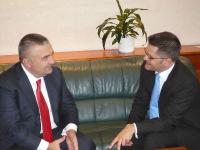 Albania’s Foreign Minister Ilir Meta and his Serbian counterpart Vuk Jeremic, have agreed to strengthen cooperation between their two countries.

The pair’s meeting came on the sidelines of a regional conference of the so-called Visegrad states in Budapest on Tuesday, and was followed by a joint press conference.

While the countries hold diametrically opposed views on Kosovo’s independence, the Albanian minister underlined, that “Kosovo’s future, similarly to the future of the region, is European”.

Tensions between Tirana and Belgrade flared in August after Albanian Prime Minister Sali Berisha spoke of the “national unification” of Albanians in the region during an interview with a local broadcaster.

The statement elicited a protest note from Serbia’s Foreign Affairs Ministry, which described the comment as “provocative and a breach of its [Serbia’s] sovereignty and territorial integrity”.

Kosovo declared independence on February 17, 2008, and has been recognised as a sovereign state by 63 countries, including the US and a major part of the EU, but Belgrade maintains that it remains an integral part of Serbia.