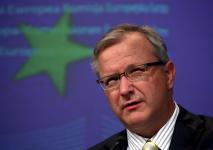 The move marks the country’s first major step towards integration in the bloc since it was granted the status of an EU candidate state in 2005.

However, the report has not set a date for the commencement of talks, which will be left for the EU Council to decide in mid-December.

Speaking to the press today, Rehn said: “We recommend opening accession negotations with FYROM. The country has made […] substantial progress on key priorities. The Commission considers that the country sufficiently fulfils the political criteria,” for the start of talks.

Last year, the EC set eight additional benchmarks for Macedonia to achieve before EU accession negotiations, which mainly targeted legal reforms. In this year’s progress report, the EC confirms that Macedonia has achieved these additional targets.

“This is a historic occasion for Macedonia and its citizens” Prime Minister Nikola Gruevski said after officially receiving the report from the EU ambassador to Skopje, Erwan Fouere. He vowed that his government would remain committed to the country’s EU integration process.

The report represents a “very strong recognition of the political will and the capacity of the government” to maintain its reform path, Fouere said. He added that the EC report will prove a “strong incentive” for the country as it continues to work towards the goal of EU membership.

Macedonia had feared that EU and NATO member Greece could use its influence to prevent the granting of a date for Macedonia’s EU talks to begin in the EC report.

“I trust that the goverenment in Skopje will [view] this as very strong encouragement to finalise the name issue. Maintaining good neighbourly relations, incuding a negotiated and mutually accepted solution to the name issue under UN auspices, remains essential,” Rehn said.

Alongside the issuance of progress reports on Macedonia and other western Balkan countries, the EC will also publish its EU enlargement strategy.

The draft-version, revealed last week, held that bilateral disputes, such as the ongoing Athens-Skopje name spat, should not obstruct the membership processes of would-be EU member states.

The draft strategy recommends that such disputes should be settled between the concerned parties, in compliance with the UN Charter, and before the Hague-based International Court of Justice, if necessary.

Political analyst Zidas Daskalovski, the head of a Skopje think-tank, the Centre for Research and Policy Making, argues that the country now has to move quickly to exploit the “window of opportunity for a final settlement of the [name] row” with Greece.

He told Balkan Insight that a settlement with Greece has to be reached before December’s EU Council in order to prevent a likely Greek veto.