EC: Bosnia Has Made “Little Progress” 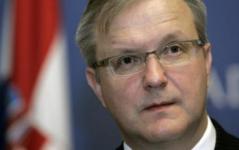 Enlargement commissioner Olli Rehn has confirmed Brussels’ stance that Bosnia and Herzegovina cannot think seriously about European integration until the Office of the High Representative, OHR, is closed.

“No quasi-protectorate can join the EU,” Rehn said. The EU “membership of Bosnia and Herzegovina could only be considered once [the] OHR is closed”, he added.

Bosnia and Herzegovina, BiH, is judged to have made “little progress” in an annual European Commission, EC, progress report released today.

“The domestic political climate has deteriorated and challenges to the functioning of institutions and inflammatory rhetoric have continued,” the report says.

Responding to these findings, Rehn called on Bosnian leaders to forego nationalistic agendas and focus on their country’s European processes.

“The leaders and ultimately the people of BiH must decide whether [their] country wants to stay permanently behind its neighbours or […] get its act together” to pursue EU membership, Rehn said.

The progress report on Bosnia also underlines that a “lack of consensus on the main features of state-building and inflammatory rhetoric have adversely affected the functioning of institutions and slowed down reform”. Corruption remains prevalent in many areas and is a serious problem, the report alleges.