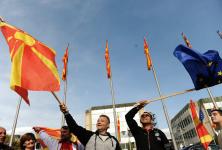 People celebrated on the streets of Skopje as news came through Wednesday that the European Commission, EC, had recommended that Macedonia begin EU accession talks.

Some paraded in cars through the streets of the capital honking and waving the Macedonian and EU flags. Others gathered in front of the government building.

“This is a great day for Macedonia”, one exhilarated man told reporters, repeating the exact words Prime Minister Nikola Gruevski had used in his reaction to the EC report. “After two decades I have finally lived to see this happening,” the man added.

“We hope for the best in the future” another man, who was waving the Macedonian flag in front of the parliament, said. “This will mean a better economy, more employment for our kids and a better life in general,” he said.

“This shows that our government and country are doing fine,” a woman said.

While some people were cheering and praising the government over the success, others were more sceptical. They argued that celebrations should be muted until the Macedonia receives a date for the start of its EU talks.

Observers say that this could happen in December at a meeting of the EU Council. However, the EC clearly stated in its report that Macedonia would have to first solve its long-standing name dispute with neighbouring Greece, in order to avoid a possible Greek blockade.

“We have a recommendation but not a date. [EU enlargement commissioner Olli] Rehn was clear that without a solution to the name [dispute] we are hardly [likely to] get a date in December. This would disappoint us and bring us back to the start. We need action now”, Radmila Sekerinska, the head of Macedonia’s Euro Integration Council, and a member of the opposition, told Alfa TV.

Athens argues that its neighbour’s name, Republic of Macedonia, needs to be changed before it pushes ahead with its European integration, as it implies that Skopje is making territorial claims on Greece’s northern province of Macedonia. Ongoing UN-mediated
photo by Robert Atanasovski negotiations have, so far, failed to bring a breakthrough.

“I believe that our energy should be focused on solving this issue; so we encourage the efforts for a name solution,” EU Ambassador to Macedonia Erwan Fouere told reporters. Rehn had previously made similar comments.

“There is a clear link between acquiring an accession date and the solution of the name row. This is a decisive period for Macedonia’s future”, Gordan Georgiev, the vice president of the main opposition party, the Social Democrats, said.

He urged the prime minister to announce the next steps his government would take to lead the country towards the dignified resolution of the 18-year name spat.

Andrea Stojkovski, from the Mladinski Obrazoven Forum, pinpointed another of Macedonia’s weaknesses: “If we trace the EC remarks we will see that [Macedonia’s] low administrative capacity is mentioned in most parts. The negotiations are waged with the help of the whole administrative and expert apparatus,” he said.

In its report, the EC wrote positively of the way in which the country conducted elections and improved the political dialogue. It noted partial progress on judicial, public administration, and police reforms.

The EC reported that corruption remains a widespread problem. The country’s treatment of prisoners and the low level of media independence are other black spots in this year’s report.

“This report will be a guideline for our further steps”, Gruevski said yesterday, after receiving it from Fouere. “Macedonia will actively and constructively […] seek a mutually acceptable solution with Greece,” he pledged.