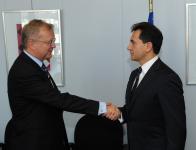 “If in October and December there is no progress, and the trade deal isn’t applied, the agreement with the EC and our European partners is to review the situation and take a decision on applying for membership,” Djelic said.

The European Commission, EC, in its annual report on prospective EU member states, has called on the EU to unfreeze the deal.

The trade pact is part of the Stabilisation and Association Agreement, SAA, signed last spring and immediately suspended due to the Netherlands’ strong opposition.

EU Enlargement Commissioner Olli Rehn said Wednesday that, as a commissioner, he has to be an optimist regarding the possibility that the Dutch may change their stance. When this question will put on the European Council agenda, depends on the EU Presidency, he added.

Djelic expressed his satisfaction with the EC report, which he says could speed Serbia’s acquisition of the status of an EU candidate state.

However, Djelic said at that point that a candidacy request would require a consensus among EU member states.

“Serbia’s priority at the moment is the implementation of the SAA, but, for that to happen, Serbia needs to continue cooperating with the Hague Tribunal,” he said.