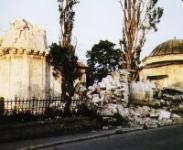 A district court in Banja Luka has dismissed as unfounded an earlier ruling ordering the town to pay over 33 million euros to the Islamic community for 16 mosques destroyed during Bosnia’s 1992-95 war.

“This ruling shows that nothing had changed (since the war) and that the same people who were destroying the mosques still have decisive influence over everything that happens here,” Muharem Murselovic, a Bosnian Muslim deputy in Republika Srpska, Bosnia’s Serb-majority entity, told media.

The previous ruling was issued in February by a local court in Banja Luka eight years after the Islamic community sought reparation from the city’s authorities for 16 mosques that had been blown up and torched in 1993.

According to media reports, the Islamic community had been ordered to pay some 25 thousand euros the cover the costs of the trial.

Destroyed mosques include 15th century Arnaudia and 16th century Ferhadija. Ferhadija which was on the UNESCO World Heritage list is currently being rebuilt.

The Islamic community is expected to appeal to Republika Srpska’s Supreme Court.

According to the Islamic community 614 mosques in the country were destroyed during the war.