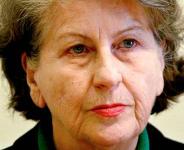 The official welcome offered to Biljana Plavsic, recently released from prison having being convicted for war crimes by the UN’s War Crimes Tribunal, in the Serb-dominated part of Bosnia Republika Srpska has sparked outrage, prompting some victims of the country’s 1992-95 war to accuse Bosnian Serb leadership of fascism.

“Unfortunately, the only thing we can do is to stand back and watch fascism in action,” Murat Tahirovic, head of an association of Bosniak (Bosnian Muslim) and Croat war camp prisoners said.

“It is clear that they are still supporting Plavsic’s war-time policies,” he added.

Plavsic was released in October from a Swedish prison after having served two-thirds of her 11-year prison sentence for war crimes and crimes against humanity.

The 79-year-old former Bosnian Serb leader was sentenced by the UN war crimes tribunal in February 2003 after she admitted playing a leading role in a campaign of persecution against Bosniaks and Croats during the Bosnian war.

During her visit to Republika Srpska, on Wednesday and Thursday, Plavsic was greeted by top Bosnian Serb leadership, including the entity’s Prime Minister Milorad Dodik, its President Rajko Kuzmanovic and Serb member of Bosnia’s central presidency Nebojsa Radmanovic.

Dodik had already drawn condemnation from Bosniak and Croat war victims after he had sent a Bosnian Serb government plane to pick up Plavsic in Sweden and bring her to Belgrade where she will be living.

Plavsic told journalists in Banja Luka on Wednesday that she would not re-enter politics, adding that the success and development of Republika Srpska has helped her survive the prison years.

“I can finally live my own life, the life I was dreaming to have once I end my political career,” she said.

The visit had also drawn accusations by some opposition leaders.

“This offends all of us who have never supported and who will never support the people who are willing to pay with other peoples’ lives for the achievement of their political and other goals,“ president of the opposition ‘Our Party’ Bojan Bajic said in a statement.

Bajic added that the warm welcome offered to Plavsic was a sign that top Bosnian Serb leaders are supporting the war crimes she had committed.

“Dodik should answer before a Bosnian court for his support to the policy of hate,” Munira Subasic, head of an association gathering the 1995 Srebrenica massacre survivors told Balkan Insight.

“How can we be expected to return to our homes in Srebrenica when the project to destroy us still lives in the heads of the Bosnian Serb leadership,” she added.