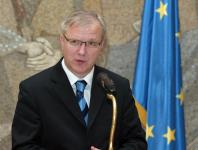 The two countries’ Prime Ministers, Greece’s George Papandreou and Macedonia’s Nikola Gruevski, are expected to discuss modalities that should ultimately lead to the lifting of a Greek blockade on Macedonia’s EU accession aspirations.

“It is a good sign that both countries are seriously engaging in talks,” local A1 TV cited Rehn as saying in Brussels. He reiterated his hope that the problem will be solved as soon as possible.

The EC last month gave Macedonia an added incentive to resolve the name dispute by recommending the EU gives Skopje a start date for accession negotiations into the bloc, but left the decision on the date to member states, who are meeting on 7 December.

If there is no name breakthrough by that date, Greece has threatened to blcok any decision to give Macedonia a start date.

Branko Crvenkovski, the leader of the Macedonian opposition, the Social Democrats, has also greeted the announcement.

“I hope that the meeting will be indeed used for finding a solution to the row,” he told local media. “It would be bad if this becomes only to a protocol meeting”, Crvenkovski warned.