Council of Europe commissioner once again heads to in Tbilisi 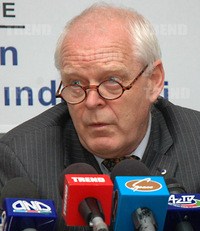 Council of Europe Human Rights Commissioner Thomas Hammarberg will arrive once again in Georgia this week to negotiate the release of two teenagers detained in Tskhinvali.

According to the Tbilisi Office of the Council of Europe, Hammarberg will arrive in Tbilisi this week and visit Tskhinvali. He will try to negotiate the release of two of the four teenagers arrested Nov.4 and sentenced for illegally crossing the border of de facto South Ossetia.

Hammerberg already played the role of a mediator and swapped five South Ossetians previously held in Tbilisi for two of the Georgian teens. The South Ossetian authorities promised him to release the other two teenagers Dec. 13.

Despite the promise, 17-year-old Levan Hmiadashvili and 16-year-old Victor Buchukuri remain in detention.

Minor George Archvadze is also detained in Tskhinvali. According his family, he was arrested by South Ossetians July 5, but few people learned about his detainment until recently.