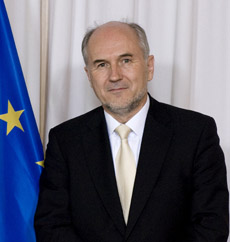 “I am extremely pleased to be here today to welcome and to reiterate my strong support to the cooperation project between the Municipal Court of Sarajevo and the Basic Court of Banja Luka.

As I stated at your previous meeting of 9 of September, the relations these two courts have established is a success story, which should be genuinely praised and taken as an example within the Justice sector but also, by extension, in other sectors of activities in BiH, from State down to municipal levels.

The progresses achieved by these two Courts are remarkable and also serve to demonstrate how much can be achieved through hard work, continuous dialogue, experience sharing, coordination and modern management methods. This is even more remarkable considering that these two Courts, which are the biggest in the country, are processing a very large number of cases. The Municipal Court of Sarajevo and the Basic Court of Banja Luka are setting the standard and showing that territorial division of responsibilities calls for cooperation of activities, sharing of experiences and information. Cooperation in this case has proven to increase efficiency and good practices..

While we speak, the biannual ministerial conference reviewing the implementation of the Justice Sector Reform Strategy is taking place in Sarajevo, which is the institutional framework in which all stakeholders of the judicial sectors are supposed to cooperate. The Strategy contains a number of fundamental activities, all necessary to improve the proper functioning of the Justice system in Bosnia and Herzegovina. I strongly believe these two courts present cooperation is fully in line with the spirit of this Strategy and represents the way forward to BiH future integration into Euro-Atlantic institutions.

However, the way ahead remains tricky and the challenges in order to uphold the Rule of Law are still numerous and won’t be easy to overcome. It is clear to all of us that a democratic society based on Rule of Law can only exist with a strong and independent Judiciary. In this regard, I notice with concern the continuous trend to reduce the budget of judicial institutions, therefore not allowing them to fully, professionally and independently perform their duties.

My office, in close coordination with the High Judicial and Prosecutorial Council, has supported the harmonization of the salaries in the judiciary throughout the country to eliminate existing discrepancies and remove impediments to the movement of judicial functions holders between different judicial structures in BIH. I am therefore concerned that the reductions of salaries in the Judiciary in the Federation that have been implemented in the past months are creating unbalances between the entities, between the entities and the State.

This meeting also comes few days after I issued decisions extending the mandate of International Judges and Prosecutors working on war crimes cases in the Court and Prosecutor’s Office of BiH. This has been a difficult decision to make but it also confirms my determination and the determination of the International Community that fully supported me in continuing its support to the entrenchment of the Rule of Law in the belief that this is a crucial requirement for improving the quality of life of the citizens and moving BiH forward in its process of integration into Euro-Atlantic institutions”.