Serbia Gets New Patriarch on January 22 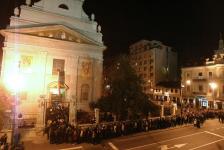 The new head of the Serbian Orthodox Church, SPC, is scheduled to be elected at a church election assembly, which begins 22 January.

The Bishop of Dalmatia Fotije confirmed the information. “All 45 bishops of the Serbian Orthodox Church will be invited and will attend the election assembly. If an archbishop cannot attend, he will entrust his vote to one of the bishops,” Fotije said.

After Serbia’s Orthodox Church, SPC, Patriarch Pavle passed away on 15 November, Bishop Amfilohije has been serving as acting patriarch until the elections.

According to the church constitution, candidates for the new patriarch are all those who have had five years of eparchy service. The names of the three bishops who receive the most votes at the election assembly will then be put into separate envelopes and placed inside the Holy Gospel. The Holy Gospel is then placed at the holy throne in the church.

A monk, who is appointed by the assembly, will take out the envelopes from the Holy Gospel and draw one of them. The monk will then hand it to the chairman of the election assembly who will read the name of the new head of Serbia’s Orthodox Church.

The Church shifted to this selection process in the 1960’s in order to avoid political influence. Patriarch Pavle was the first to be elected in this way.

The Church Constitution can only be changed if the new patriarch were not to be elected.

“This is possible if none of the candidates receives enough votes, because one candidate must have 50 per cent plus one vote to enter the triple candidacy. Hypothetically, if we do not have three candidates with enough votes, we must use another procedure which is defined by the assembly,” Fotije said.