Burundi: the trial of the alleged perpetrators of the coup of May 13 and 14 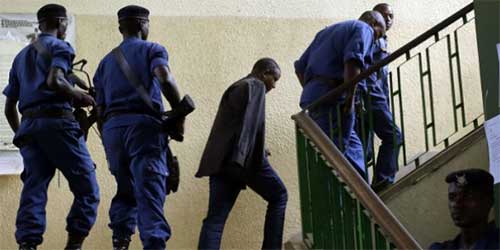 According to judicial sources, the trial of 28 Burundian soldiers and police officers accused of involvement in the attempted coup of May 13 and 14 in Burundi, including General Cyrille Ndayirukiye, former defense minister and number two coup , opened Monday.
This is in Gitega, a hundred kilometers east of Bujumbura, that is open to December 14, mid-morning, before the Supreme Court – have jurisdiction over senior officers – the trial of those accused of coup of May 13 and 14 in Burundi.
The 28 accused, including General Cyrille Ndayirukiye, former defense minister presented as the number two of the coup leaders, are charged with “attempted coup and call for a popular uprising, killing soldiers, policemen and civilians and malicious destruction (sic) of buildings, facing the crimes of imprisonment for life, “according to the indictment read by the prosecutor, Adolphe Manirakiza.
According to two witnesses contacted by telephone from Nairobi, detainees have denounced their inhuman and degrading conditions of detention, saying they are held “four in cell 2 X 3 m and are forced to relieve themselves in buckets that are emptied at the end of 24 hours “.