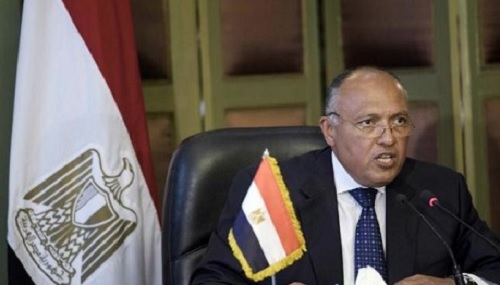 Egypt’s Foreign Minister Sameh Shoukry flew to Washington on Tuesday evening to participate in the ministerial meeting of the international anti-Islamic State group coalition hosted by the United States, a statement by the Egyptian foreign ministry announced.
According to statements by foreign ministry spokesman Ahmed Abu Zeid, Shoukry is set to attend the meeting held in Washington with the participation of 43 countries for the international coalitions against the Islamic State group.
Several defense ministers from countries participating in military strikes against the group in Syria and Iraq will also be taking a part in the summit along with the foreign ministers of the anti-IS group alliance.
Egypt is a major supporter of the US-led coalition against the IS group.
Egyptian security forces have been fighting a decade-long Islamist insurgency in parts of North Sinai that spiked following the 2013 ouster of Islamist president Mohamed Morsi, with the Islamic State group’s Egyptian affiliate claiming responsibility for most of the attacks.
Shoukry is also expected to attend a quadrilateral meeting held by the US that will also be attended by Egypt, Italy, and the United Arab Emirates to discuss the latest developments in the Libyan crisis.
Libya plunged into chaos following the 2011 toppling and killing of dictator Muammar Gadhafi and is now torn between a U.N.-backed unity government and rebel Islamist government.
Egypt has repeatedly expressed its faith in the inevitability of a political solution to the Libyan crisis.