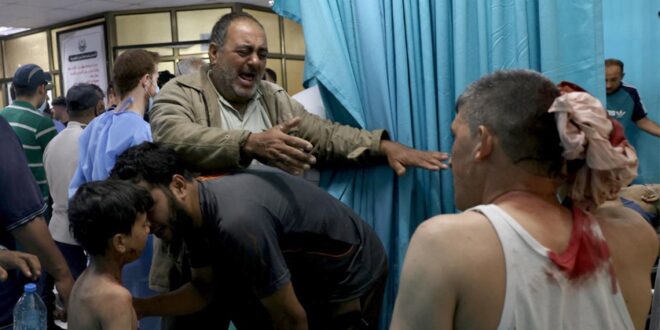 Gaza (IP) – As the Gaza health system was struggling with a runaway surge of coronavirus cases, Authorities cleared out hospital operating rooms, suspended nonessential care and redeployed doctors to patients having difficulty breathing.

In Israel, airstrikes and artillery attacks so far, at least 120 Palestinians, including 31 children, have been killed and more than 500 people wounded in the impoverished territory.

Distraught relatives didn’t wait for ambulances, rushing the wounded by car or on foot to Shifa Hospital, the territory’s largest.

Others gathered at the hospital morgue, waiting with stretchers to remove the bodies for burial.

At the Indonesia Hospital in the northern town of Jabaliya, the clinic overflowed after bombs fell nearby. Blood was everywhere, with victims lying on the floors of hallways. Relatives crowded the ER, crying out for loved ones and cursing Israel, The Economic Times reported.

“Before the military attacks, we had major shortages and could barely manage with the second coronavirus wave,” said Gaza Health Ministry official Abdelatif al-Hajj by phone as bombs thundered in the background. ” Now casualties are coming from all directions, really critical casualties. I fear a total collapse.”

There are shortages of equipment and supplies such as blood bags, surgical lamps, anesthesia, and antibiotics. Personal protection gear, breathing machines, and oxygen tanks remain even scarcer.

Before the Israeli military raid, Gaza’s daily coronavirus cases and deaths hit record highs, fueled by the spread of a variant that first appeared in Britain.

While virus testing remains limited, the outbreak has infected more than 105,700 people, according to health authorities, and killed 976.