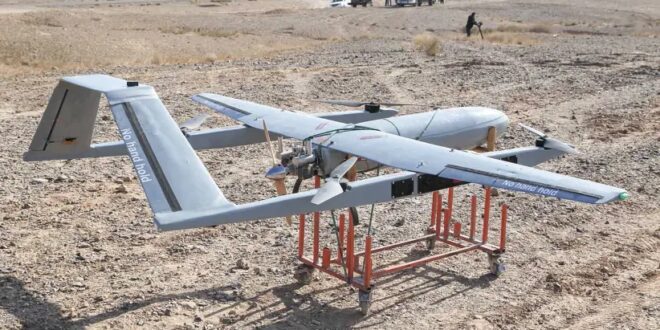 Downing happened on sidelines of Gaza fighting. “I think that says everything about the real patron of terror in the Middle East and the world – Iran.”

The drone Israel shot down near the border with Jordan on Tuesday was Iranian, Prime Minister Benjamin Netanyahu said on Thursday.

“While we were engaged in these hostilities a few days ago, Iran sent an armed drone from Iraq or from Syria,” Netanyahu told German Foreign Minister Heiko Maas, who was in Jerusalem. “Iranian forces launched an armed drone, which our forces intercepted on the border between Israel and Jordan.

“I think this says everything on the true patron of terror in the Middle East and in the world: Iran,” Netanyahu added, showing Maas a piece of the drone.

The IDF shot down a drone on Tuesday that was approaching the Israeli-Jordanian border, traveling toward the Emek Hama’ayanot Regional Council in northern Israel.

IDF units collected the fragments of the destroyed aircraft for further examination.

At the time, residents of Beit She’an – which sits within the regional council – were instructed to lock themselves in their homes for nearly an hour, before the IDF announced that the area had been secured, and that it was again safe for people to leave their homes.

Netanyahu said he described to Maas how Israel is fighting on multiple fronts, and that Iran is behind all of them.

“Iran not only supports completely the Islamic Jihad in Gaza, and gives them all the finance, they also give weapons to Hamas as well as to Hezbollah, and they provide the scaffolding on which these organizations really work,” he stated.

Iranian Quds Force Commander Ismail Ghaani wrote a letter of support to Hamas’s Izzadin al-Qassam Brigades commander Mohammed Dief this week, according to Iranian news site Khabar Online. Ghaani wrote to Dief that he was “faithful to your promise to the enemy. The usurper tasted the fear, defeat and humiliation… This war has ushered in a new phase in the battle with the enemy… The equation is that the enemy cannot isolate Quds [Jerusalem] without receiving a tough response.”

World powers continued negotiations with Iran in Vienna throughout the time that Hamas and other Gaza terrorist groups rained rockets on Israel with material support from the Islamic Republic. The goal of the negotiations is for Iran to return to compliance with the Joint Comprehensive Plan of Action, as the 2015 nuclear deal is known, and for the US to lift sanctions placed on Iran since 2018.

Russian Ambassador to International Organizations in Vienna Mikhail Ulyanov tweeted photos from ongoing talks with Iranian Deputy Foreign Minister Abbas Araghchi on Wednesday, and said on Thursday that while negotiations for Iran to return to the JCPOA would not be completed by the May 21 target date, “the talks will continue until a successful outcome.”

Enrique Mora, the EU official leading indirect talks between the US and Iran, said Wednesday that he was confident talks were “on the right track,” and that a deal would be reached as a fourth round of negotiations adjourned.

However, diplomats from Britain, France and Germany, known as the E3, were more reserved in their assessments of the talks’ progress, saying “there are still some very difficult issues ahead.”

“Germany stands with Israel and its right to defend itself,” Maas said ahead of a meeting with Foreign Minister Gabi Ashkenazi. “I came to Israel to show solidarity and support Israel after the rocket fire from Gaza. Israel has the right to defend itself. Israel’s security and that of the Jewish residents here are not negotiable.”

Maas added that he has been following the humanitarian situation in Gaza with great concern, but that he is aware of Israeli efforts to bring humanitarian aid to the coastal enclave.

In recent days, Hamas twice shelled humanitarian aid convoys from Israel into Gaza, killing two civilians and injuring 10, according to the Foreign Ministry.

Maas also said that Germany supports efforts to bring about a ceasefire, and that he has been in contact with the US, Egypt and others toward that aim.

“We need to look to the future and make sure there is sustainable peace in the region that allows for a situation in which Israelis and Palestinians can live here with self-determination,” Maas stated. “The current situation is one of uncertainty that only serves to strengthen those who spread hate and terror.”

Maas met with Ashkenazi, who also accompanied him to Petah Tikva to see a home that was destroyed by a Hamas rocket and receive a security briefing from Home Front Command commander Maj.-Gen. Ori Gordin.

Soon after, Kulhanek and Korcok visited the same house.

Kulhanek said he was “speechless” after seeing the destruction that terrorism against Israel has wrought.

“In these trying times, Israel, more than ever, needs to be reminded that it has friends in the world,” he stated. “The Czech Republic proudly waved an Israeli flag over its government institutions as a sign of identification with and support for Israel. Israel has the full right to defend itself.”

Korcok said that Israel and Slovakia are “true friends,” and that he is in Israel to show the power of that friendship.
“Hamas’s shooting must stop,” he said. “Israel has the right to defend itself.”

Ashkenazi thanked the foreign ministers for their countries’ support, and said that raising an Israeli flag over the Czech Foreign Ministry and Bratislava’s City Hall is “heartwarming and cannot be taken for granted.”

Ashkenazi explained that the current round of fighting is different from the past: “Hamas’s missile attacks on Israel broke out following a brutal attempt by Hamas to strengthen its political status and take over the Palestinian agenda and Palestinian Authority leadership.

“Hamas chose to do this through terrorist attacks and shooting missiles and rockets at Israeli civilians in Jerusalem, Tel Aviv and the south. [Hamas] is doing this from populated areas, in backyards and schools, while using residents of Gaza as human shields. Hamas is committing a double war crime.”

Ashkenazi pointed out that Hamas rockets have destroyed electric lines running to Gaza, and then Hamas shot at Israeli Electric Company staff that tried to fix them.

“This is another example of how Hamas harms the population of Gaza and cynically takes advantage of its distress,” Ashkenazi said.

Maas also met with Defense Minister Benny Gantz, who updated him on developments in the fighting against Hamas and progress toward the goal of attaining long-term quiet and security for Israelis.