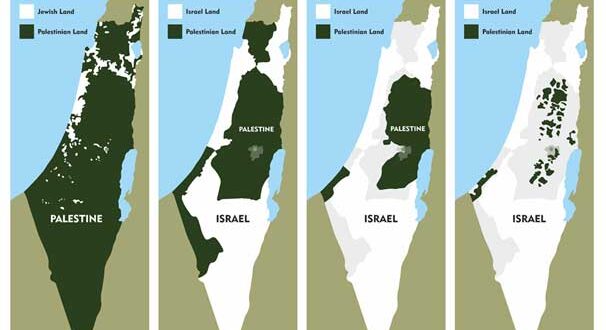 Too often, simple histories are being manipulated so that the truth is expelled from the dominant narrative. There are many cases, where the voices of the weak are silenced and falsehood is established. Truth is being ignored and frequently even criminalized. Speakers of truth are being discriminated and persecuted. Such is the situation of the Palestinians, and indeed the Arabs in general.

A simple truth is that Israel is a colonial settler state. The settlers are predominantly of European origin. They did not come as refugees or migrants asking for help and permission to stay. Instead, they came as invaders and occupiers, taking by force the land and property of Palestinian people living there for many generations.

Since the time of the early Christian crusaders, the Europeans tried to establish a bridgehead in the Arab region. A first occupation of Palestinian areas was ended by Arab forces under their leader Salah ad-Din. The second occupation by Jews is marked by what Arabs call al-Nakba (the catastrophe), the violent assault upon the Palestinians by Jewish military forces killing many civilians and causing the mass exodus of hundred thousands of people from their land.

Ever since, Israel was being used to antagonize and humiliate all the neighboring peoples. Fulfilling its function, this state has been in permanent war of aggression. All the neighboring states are constantly threatened, and indeed frequently bombarded or invaded.

The Jews are a relatively small number of people worldwide, of which nearly half now live in the Jewish state. The Jewish part of the population is raised up indoctrinated with bizarre lies presenting them as rightful owners of the land and installing in them the sense and ideology of superiority towards the Arabs.

While Jews were well accepted and prospering under Muslim rule in Al Andalus, they were targeted by the Christian conquerors through the so called Spanish Inquisition. Ever since, the Jews were discriminated in many parts of Europe. Numerous times, Jewish communities were assaulted, looted and displaced. Their neighbors were made to suspect them and were frequently forming violent mobs attacking and lynching them.

So they became the chosen people to serve the German Nazis as favorite scapegoat to be blamed for hardship and misery suffered by the population in the territories under their rule. They were also used to justify the claim of superiority of the Aryan race and its entitlement to rule over other peoples. A systematic extermination program was organized and executed against people with Jewish ancestry in the territories under Nazi control.

After the German capitulation, the surviving Jews in Europe had to be dealt with. It was decided to use them as colonial settlers for a Jewish state in the Arab lands. Largely being settled on violently expropriated land and many also living in usurped houses, these Jews and their ancestors were placed in a position, where all the neighboring peoples learned to suspect and fear them.

Instead of living in peace and safety to heal the traumas, and to recover from the devastation caused by all the violence inflicted on them, they were held under constant fear and distrust of their Arab neighbors.

The Palestinians suffered the consequences of being forced in a permanent war to defend their homeland against militarily superior colonizer forces supported and equipped by dominant world powers. While defending themselves against invaders and occupiers is clearly legitimate, taking the land, property and resources of any indigenous or otherwise long settled peoples can never be. The factual control over territory, as well as the legal aspects usually arranged after establishing the facts, can only base itself upon suppression and might. What the politicians do, if they sign whatever paper or not to legalize the results of illegitimate actions, doesn’t alter the truth and cannot lead to peace. Another sad truth is sung by John Trudell in ‘Bombs over Baghdad’, where it says that ‘their violence works – it hardly ever fails’.

The Palestinians struggle as best they can, but constantly loose people, territory and control. I am not in a position to give any advise to, or even judge the actions of Palestinians. All Palestinians, including the descendants of those being expelled, are the legitimate people who belong to the land. Truth and justice can only be restored by listening to them.

Peace can only spring from acknowledging the truth by those whose lives are built upon injustice. For Israel, to give up its lies and end its aggressions seems impossible. And yet it is the only possible route to peace. Furthermore, it seems highly likely that such a path would indeed lead to peace.

Acknowledging the truth and signaling preparation to take responsibility for past injustice would go a long way to open the hearts and minds of Arab peoples for a confidence-building process. The colonial settlers would have to finally ask for permission to be allowed to stay on the land. The question is largely symbolic, because the consequences of past injustice cannot be erased and the past cannot be restored. If they would accept to live without undue privileges as equals to their neighbors, they would surely be accepted as people belonging to the land. In this context it is worth noting, that before the Zionist colonization Jews lived peacefully in Palestine.

The Palestinians are submitted to a genocidal project by the Zionists. The one area, where truth can find refuge, is the people’s hearts and minds. And indeed, many people see Palestine as the prime example today for the colonial crimes committed against numerous peoples. Yet even masses of powerless people remain without significant influence. Many are silenced, some being deterred by the vicious attacks of the defenders of falsehood perpetrated against those speaking truth of the matter. The old saying, to speak truth to power, seems useless, because those in power don’t care. They prefer to focus on imposing their schemes and installing their lies.

Israel stands for violence and injustice

Wholesale criminality and extreme violence mark the paths of the Europeans for centuries. Falsehood has been established in all their dealings. Worldwide, many indigenous peoples suffered genocidal projects by Europeans and continue to fight for their survival defending themselves against such aggressions and forced assimilation.

Some of the European colonial settler states where indeed liberated from the rule of the settlers. Examples are Algeria, Rhodesia (Zimbabwe) and also South Africa. There have been serious efforts of reconciliation in New Zealand. On the other side, most of the indigenous peoples in the Americas and Australia continue to be threatened by genocidal policies of the dominant society of European origin. In the Americas, the ancestors of the African slaves also continue to be oppressed.

In the long run, the Jews in Palestine seem to be in a difficult position as hated others, who are feared, but not respected. There position is solely dependent upon violence and oppression. And should the foreign powers, enabling them to continue their domination, ever have to retreat, the colonial settlers will find themselves in a desperate situation.

The struggle for the liberation of Palestine from colonial rule will always continue, until truth and justice are being restored.

Post Views: 161
Previous A Letter to Biden on Gaza
Next Apartheid – a global racist phenomenon