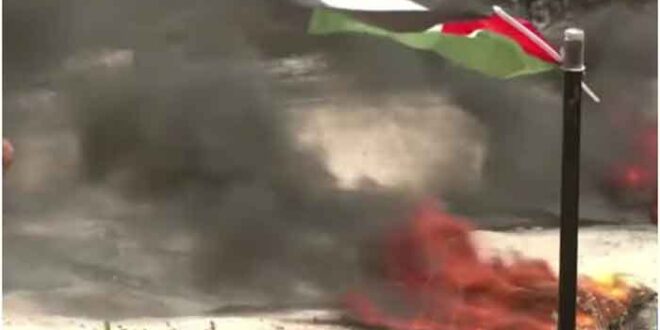 Dancing With The Israeli Flag In Jerusalem: What It Means And Why Palestinians Rage

Today, June 15, 2021, Israeli Jewish supremacists are marching in East Jerusalem as Palestinians call for a ‘Day of Rage’ in response.

“We call on all free people everywhere to stand in solidarity with the Palestinian people and its just cause and end the Israeli aggression on our people and holy places,” The Committee of Islamic and National Groups stated. “Let the world know that the continuous Israeli violations in Jerusalem will remain to be the trigger, which sparks the fight.”

Palestinians see the Israeli annual raid of the Old City (including the Haram al-Sharif complex, where al-Aqsa mosque is housed) in celebration of the occupation, annexation and Judaization of Jerusalem under the flag of the Zionist Jewish state as an abomination.

In previous years, Palestinian Jerusalemites mostly cowered and shuttered their businesses and homes in the face of the rampage and hate-filled slogans of the Israeli Jewish marchers. They too took to describing the event as instigated by “far-right and anti-Palestinian activists,” rather than by the very apartheid and systemic structure of the Jewish supremacist state itself.

But this time, as Ahmed Abu Artema wrote in The Electronic Intifada on 14 May 2021, this time, it’s different:

The current escalation is distinguished by the fact that the Palestinian people demanded a response to the practices of the Israeli occupation. Hamas, in responding, is being considered heroic.

There is no public judgment or denunciation of Hamas’ decision to act, even when citizens are paying the harshest price of Israeli aggression, losing their loved ones and their homes.

It is clear in Gaza that Palestinians remain firm in their belief in resistance as the pathway to liberation from occupation.

This round of fighting is also significant because it came as a response to continuous violations in Jerusalem.

All previous rounds of Hamas escalation have been provoked by Israeli aggression on the Gaza Strip. Thus, when Jerusalem called for Gaza’s aid, and Gaza rose to defend Jerusalem, this amplified the burgeoning sense of Palestinian national unity and liberated the Palestinian resistance from its isolation in Gaza.

In effect, this time, Hamas is saying to Israeli Jews in occupied Jerusalem: If you want to worship in the Old City, leave your occupation flags at home and leave al-Aqsa alone.

Israelis celebrate Jerusalem Day at the Western Wall as blaze is seen in the background at the al-Aqsa mosque compound in Jerusalem Old City, May 10, 2021. May 10, 2021. (Mendy Hechtman/Flash90)

Wikipedia informs us about Jerusalem Day in the following harmless Israeli PR narrative as: “an Israeli national holiday commemorating the reunification of Jerusalem and the establishment of Israeli control over the Old City in the aftermath of the June 1967 Six-Day War.” All kosher and above board.

That PR is in keeping with today’s rhetoric by Internal Security Minister Omer Bar-Lev, who issued a statement justifying the provocation of the Flag Day March through Jerusalem as, of all things, a democratic act!

“In a democracy it is allowed and important to demonstrate for all types of causes as long as it is within the confines of the law. We will hold a police assessment about the events and we will operate according to the recommendations of the police.”

For Palestinians, the rampaging herds of Jewish youth annually coursing through their streets shouting “Death to Arabs” are a far cry from what Bar-Lev is suggesting — that they represent a far-right racist group, like the KKK in the US, who have the right to freedom of speech in a democracy. What he is obscuring is the fact that Israel, as a state from top to bottom, is a Jewish supremacist colonial-settler state whose reason and strategy for existing is exactly that of these rampaging hoards.

To Palestinians, this march through Jerusalem means that “opportunities” continue to open up in Israel for “a lasting and radical solution of the most vexing problem of the Jewish state” — the Palestinian population.

On this day in 1948, future Israeli Prime Minister Sharett exulted to World Zionist Organization head Goldman on Israel’s successful ethnic cleansing: “the most spectacular event in the contemporary history of Palestine…is the wholesale evacuation of its Arab population…The opportunities opened up by the present reality for a lasting and radical solution of the most vexing problem of the Jewish state, are so far-reaching, as to take one’s breath away. The reversion to the status quo ante is unthinkable”, i.e. the refugees would not be allowed to return.

What we’re seeing here is the rise of a nakedly genocidal regime in Israel, one that is identical and faithful to its fundamental Zionist roots. And as a friend commented on Facebook: “This is going to go from horrible to a level of atrocious we can’t imagine. And thus makes stepping up the resistance even more imperative.”

Palestinian rage is righteous. It ought to be clear to the world now what and who “the obstacle to peace” is and has always been. This remarkable Palestinian uprising may have been sparked by the Sheikh Jarrah expulsions, but it has radiated across all of Palestine and beyond.