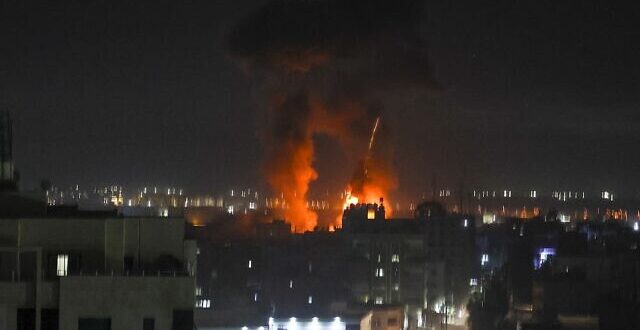 The Israel Defense Forces carried out a series of airstrikes throughout the Gaza Strip early Wednesday morning in response to over two dozen fires in southern Israel caused by incendiary devices launched from the coastal enclave.

This was the first exchange between terror groups in Gaza and the IDF since last month’s 11-day conflict in the Strip.

The IDF said it was prepared for the possibility that fighting may again break out between Israel and the enclave.

Footage posted by Palestinian media outlets in Gaza showed explosions lighting up the sky in both the northern and southern Strip overnight Tuesday-Wednesday, with reporters saying sites belonging to Hamas’s military wing, the Al-Qassam Brigades, were among those targeted.

No Gazans were injured in the strikes, the Hamas-affiliated Palestinian media center initially reported.

The IDF later released a statement saying its fighter jets had struck military targets that were used for Hamas operations in Khan Younis and Gaza City.

“Terrorist activity took place in the attacked compound,” the IDF said, adding that the strikes were in response to the launching of incendiary devices at southern Israel earlier in the day.

“The IDF is prepared for all scenarios, including the resumption of hostilities, in the face of continued terror acts from the Gaza Strip,” the army added.

The air raids were the first since an Egyptian-brokered ceasefire ended an 11-day round of violence between Israel and Palestinian terror groups in Gaza. They came at the closing of a day of heightened tensions, during which Israeli authorities allowed thousands of right-wing nationalists to rally through the Old City of Jerusalem in an annual flag parade, despite threats from Hamas that the controversial demonstration would lead to an escalation.

Amid warnings from Gaza terror groups, the IDF vowed to maintain its deterrence and respond to all breaches of Israeli sovereignty, including arson attacks, which caused over 20 fires in communities bordering the enclave on Tuesday. Some Palestinians also rioted along the border, one of whom was reportedly shot in the leg, suffering light injuries.

These were also the first Gaza strikes since Naftali Bennett took over Sunday as premier. The Yamina chairman has long insisted that the IDF’s response to arson attacks should be the same as it is for rocket fire.

Earlier Tuesday, the Hamas terror group had claimed victory after the flag march, claiming to have established a “new formula of deterrence” vis-à-vis Israel.

“The brave positions and decisions of the Palestinian resistance forced the Israeli occupation to change the path of the route away from Al-Aqsa mosque, change the civil air routes and beef up the deployment of the Iron Dome,” the terror group said in a statement.

The march, attended by several thousand nationalist Jews, was rescheduled from Jerusalem Day, March 10, when it was cut short due to Hamas rocket fire that targeted the city, setting off 11 days of fighting between Israel and Palestinian terror groups in the Gaza Strip.

In the run-up to the march, Israel took a number of measures to beef up security, including having 2,000 police officers secure the parade in Jerusalem, sending reinforcements to the West Bank and deploying Iron Dome missile defense batteries, including reportedly near the capital. Flight trackers showed air traffic to and from Ben Gurion Airport was being rerouted northward further away from Gaza to avoid any potential rocket fire.

“The operational plan proved itself and led to a successful end of the incident,” Public Security Minister Omer Barlev was quoted saying by the Kan public broadcaster after meeting with top police officers following the march.

Police said that 17 people were arrested in clashes between cops and Palestinians as the march began near the Old City for disturbing the peace, throwing rocks and assaulting officers.

According to the Palestinian Red Crescent, 33 Palestinians were injured in the clashes, six of whom were hospitalized for wounds from rubber or sponge-tipped bullets and another Palestinian that the medical service said was injured by live fire, but whom police were preventing emergency workers from evacuating for treatment. Police said two officers were injured and taken for treatment.

According to Channel 12 news, Israel warned Hamas via Egypt that there would be a tough and immediate response to any rocket fire from Gaza. The network quoted a diplomatic source vowing Israel would respond to the arson balloon attacks, but would pick the timing.

The network asked the diplomatic source what Bennett would now do as prime minister in light of hawkish comments he has previously made.

“On the one hand there are doubts. We want to show that there really is a new equation here like we promised after Operation Guardian of the Walls,” the source said. “On the other hand, we don’t want to create the connection that Hamas wants us to create between Gaza and Jerusalem. There will be a response and it will be expressed in a variety of forms.”

The network also noted Hamas frustration over the stalling of the latest installation of monthly aid from Qatar. The payment of millions of dollars has not been transferred since last month’s Gaza war, with Israel refusing to allow it unless the terror group releases two civilians and two bodies of IDF soldiers it’s been holding captive. Egypt has also opposed restarting the Qatari payments, insisting that a new mechanism be used to transfer them to Gaza so that they don’t reach Hamas directly.

The Kan public broadcaster reported that Israel had reassured both the Palestinian Authority and Jordan that they were not looking for an escalation. Additionally, the outlet said the United States had also expressed concerns about the situation.

Earlier, Channel 13 news cited unnamed Palestinian sources saying Egypt had asked Hamas not to cause an escalation, warning that such a move would “embarrass” Cairo and that Bennett’s government — which approved the parade on Monday — would respond forcefully.

According to the sources, Hamas responded that “all options are on the table” but escalation could be avoided “if the event doesn’t get out of control.”

Post Views: 51
Previous Dancing With The Israeli Flag In Jerusalem: What It Means And Why Palestinians Rage
Next Jordan king’s ex-aide accused of sedition ‘tried to regain Jerusalem residency’