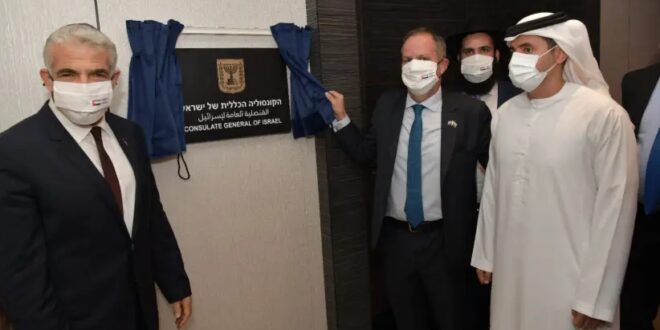 Lapid inaugurates Israeli Consulate in Dubai: ‘We created the incredible’

“We are starting to get used to making history,” Lapid quipped, noting that he had inaugurated the Israeli Embassy in Abu Dhabi the day before.

Foreign Minister Yair Lapid inaugurated Israel’s Consulate in Dubai on Wednesday, on the second day of the first trip to the United Arab Emirates by an Israeli minister since the countries established diplomatic ties.

“We are starting to get used to making history,” Lapid quipped, noting that he had inaugurated the embassy in Abu Dhabi the day before.

The consulate, Lapid said, is a place “of dialogue between two talented peoples who can and who want to contribute to one another…. A place that symbolizes our ability to think together, to develop together, to change the world together.

“We don’t accept reality, we create reality. Our two nations created the incredible,” he said.

In a conference room with a view of some of central Dubai’s many skyscrapers, Lapid paid tribute to Emirati ingenuity and Israeli technological know-how.

The foreign minister said his son made Emirati friends when studying abroad, and that his son said Emiratis and Israelis share a mentality and energy.

“After two days here, I know exactly what he means,” he said.

Lapid said “the peace we are celebrating today isn’t between governments and leaders but between people and nations.”

He quoted UAE founder Sheikh Zayed bin Sultan Al Nahyan: “Despite all the achievements, we still have an ambition for more. That is my way of looking at things.”

UAE Minister of State for Artificial Intelligence Omar Al Olama attended the ribbon-cutting ceremony, and said “ultimately, the warm ties between Israel and the UAE are slated to grow in many areas… We will usher in a next phase of bilateral cooperation that will be a model to many countries.”

The pavilion, which is still under construction, is flanked by the Italian and Indian pavilions. Israel’s structure is a large corridor open on two sides, with its walls planned to be covered in screens. One end of the pavilion features the words “to tomorrow” in Hebrew and Arabic.

Israel’s commissioner to the Expo, Elazar Cohen, said the pavilion is meant to reflect the country’s position in the Middle East.

The open structure allows visitors to see the horizon, which is meant to relay that “with Israel, we can move forward together with our neighbors to the future.”

During the Expo, nearly every government ministry plans to contribute professional programs reflecting opportunities in business, industry and investments in Israel.

In addition, there will be cultural events, involving music, theater and food meant to reflect the country’s diversity, languages and religions.

The pavilion is being built on a 1,600 sq.m. plot of land, but will be two stories high, making it nearly 2,500 sq.m.
On Tuesday, Lapid dedicated the Israeli Embassy to the UAE and met with the Gulf state’s Foreign Minister Abdullah bin Zayed.

The ministers released a joint statement on Wednesday expressing “their conviction that bilateral ties will be deepened, broadened and strengthened even further in the near future for the benefit of both countries and the region as a whole.”

They also said they would have a close strategy to address regional challenges and promote peace.

Lapid said his meeting with bin Zayed revolved mostly around regional issues and American involvement in the Middle East, as well as expanding the Abraham Accords to other countries.

The foreign minister expressed hope that more Arab countries will follow the UAE, Bahrain, Sudan and Morocco in establishing relations with Israel, but said naming them would hurt the chances of it happening.

“There are other countries we talk to half under the radar,” he said. “The goal is to have relations with as many as possible.”

The foreign minister also hailed “the unusually large pile of economic agreements [between Israel and the UAE] happening quickly that will influence the lives of all Israelis,” and will help Israel’s economy in a difficult time.

Lapid and bin Zayed signed an economic cooperation agreement at the end of their meeting.

The agreement includes establishing a joint economic committee led by the countries’ economy ministries, meant to remove barriers to trade.

The sides said they are interested in signing a free trade agreement and have begun discussing the matter.