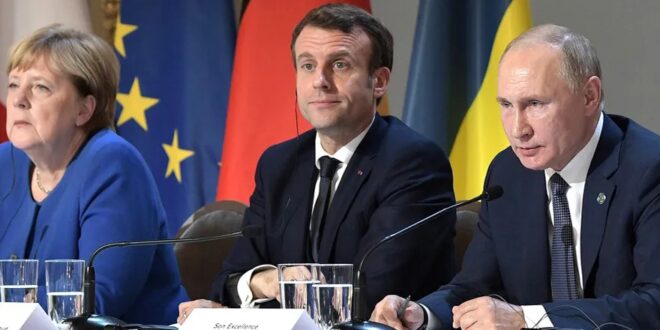 Despite the failure of their initial proposals to engage in a summit with Russia, German Chancellor Angela Merkel and French President Emmanuel Macron are still promoting the idea. Far from leading to a productive dialogue with Russia, the Franco-German proposal will only continue to divide the EU and NATO.

They tried and failed. But they are determined to try again, in the full knowledge that they will fail again. Last week’s rejection by EU leaders of a Franco-German initiative to launch a new summit with Russia should have been considered as a serious rebuff to German Chancellor Angela Merkel and French President Emmanuel Macron. After all, the EU’s closest and weightiest partners are used to getting their way in Europe.

Still, the pair seem undaunted by this unusual bruising experience. Immediately after the EU summit concluded in Brussels last Friday, Macron held a press conference in Paris during which he reiterated all the arguments which had just been rejected by his EU colleagues. And yesterday, Merkel repeated her arguments that an EU summit with Russia is essential in order to handle growing tensions with Moscow, stating: ‘It’s better not just always to talk about [the problem with Russia] among ourselves, but to confront the Russian president with these things and to say that beneficial cooperation can’t take place on such a basis’.

But why do Macron and Merkel persist in this initiative, in the full knowledge that they are unlikely to get past the stiff opposition offered by the Central and Eastern European members of the Union? Essentially, officials in Paris and Berlin believe that, when it comes to handling Russia, the EU’s newer members are part of the problem rather than the solution. This perspective is seriously debilitating and destructive for European solidarity, and dooms the EU to repeated failures.

Who are the Odd Ones Out?

‘The discussion was complex, and that’s normal. And that’s normal because, on this subject [of Russia], we do not have the same history’, Macron told the media last Friday, after the rebuff of his summit proposal.

At first sight, this is merely a statement of the obvious: countries tolerate different risks in managing relations with Russia, based on their geographic proximity and recent experience. But in repeating the mantra of ‘different histories’, Macron merely papers over the real trouble with the EU debate about Russia today. The problem is not simply different perspectives of member states, but a persistent refusal in both Paris and Berlin to accept that, when it comes to dealing with Russia, it is France and Germany who may be the real outliers in the EU.

While Macron has never denied Russia’s malevolent actions (he was, after all, subjected to Russian ‘interference’ during his own electoral campaign back in 2017), any initiative from Paris to engage in a dialogue with Russia is judged by the former communist bloc states of Central and Eastern Europe against the backdrop of a long French history of seeking to accommodate Russia by accepting – either explicitly or tacitly – certain claims by Moscow. For instance, Russia’s desire to continue exercising special jurisdiction over its neighbouring states has been bolstered by France’s suggestion that relations with Central and Eastern European states should be handled as part of the broader – and invariably Western-dominated – handling of relations with Russia.

This was evident in: François Mitterrand’s forlorn attempts in the early 1990s to prevent the enlargement of the EU to the former Soviet bloc countries without offering them any other security framework; Jacques Chirac telling the Central and Eastern Europeans that they had ‘missed a great opportunity to shut up’ because they opposed the Franco-Russian ad hoc coalition in opposition to the US war in Iraq; Nicolas Sarkozy’s ‘let’s split the difference’ negotiations with the Russian invaders of Georgia in 2008; and François Hollande’s ‘take a bite but don’t swallow it whole’ approach to the Russian invasion of Ukraine in 2014.

Although Germany’s dealings with Russia have been different from those of France, Berlin is also an outlier compared to most of Europe. With only a few exceptions, the political class in Berlin seems to rely on two interrelated and longstanding concepts about Russia: remorse for the Nazi invasion of the Soviet Union in 1941 (which seems confined to Russia itself and does not extend to Ukraine, which suffered the brunt of the initial invasion) and gratitude for Moscow’s decision to allow German reunification in 1989. Whether Germany should be grateful to Russia for peacefully giving up on a four-decades-long occupation of East Germany that should have never taken place is seldom explained; time after time, German politicians repeat the clichés about their country’s supposed historic duties for good relations with Russia.

While it is tempting to dismiss all this as yesterday’s stories, Germany and France continue to push for a compromise with Russia that would affect the interests of Central and Eastern European member states.

Take the Nord Stream 2 pipeline project. Set to run from Russia to Germany, it will increase Germany’s dependence on Russian energy products and allow Russia to increase political pressure on Ukraine. Germany’s federal president, Franz-Walter Steinmeier, recently defended the pipeline as not only a ‘bridge between Russia and Europe’, but also a form of compensation for the Nazi invasion of the Soviet Union. Furthermore, German officials continue to claim that the project is ‘purely commercial’ despite the fact that none of Germany’s closest allies – including the US – take this claim at face value.

Macron, on the other hand, emphasises the imperative of reaching an ‘accommodation’ with Russia to keep it away from an alliance with China. As Nigel Gould-Davies wisely pointed out, this idea of ‘triangulism’ – the notion that concessions must be offered to Vladimir Putin to keep Russia and China apart – is ‘not just misguided but potentially dangerous’. Among other things, it encourages Russia to believe that it is the privileged partner in the relationship. This brings with it the traditional Russian demand for spheres of influence.

Added to this are other recent remarks from the French president, such as the assertion that NATO is ‘brain dead’ or the claim that the Alliance was established ‘to face down the Warsaw Pact’.

As seen from Central and Eastern European countries, these are not just gaffes but permanent reminders that consecutive governments in Paris and Berlin have considered their links with Russia as far too important to be left to them. None of this is to deny the contribution which both Germany and France have made to Europe-wide security, but the results are often not completely convincing, at least as seen from this perspective.

Take German reconciliation efforts with Poland over the past three decades. While they were genuine and generous, they were never comparable to those between Germany and France. Macron’s visit to the Baltic states in October last year was a step in the right direction, but it was the first such tour by a French head of state in two decades.

Both Germany and France now contribute to NATO’s Enhanced Forward Presence in the Baltic. However, this has not dispelled the lack of trust among Central and Eastern Europeans about proposals on Russia made by a French president who has frequently dismissed the military alliance which all former communist states see as the bedrock of their security.

Paris and Berlin are not necessarily wrong to raise the question of a dialogue with Russia. However, to do so successfully, they would be well advised to start by articulating what this dialogue should include.

Two arguments are advanced for a new summit with Russia, and both remain unpersuasive. The first, put forward largely by Merkel, is that a summit would allow the Europeans to ‘address all the questions that weigh on us and also those on which we want to cooperate’, as though Putin is still unaware of what Europe’s problems with Russia are, and is just waiting for a summit to hear Europe’s gripes.

Meanwhile, Macron claims that the EU must hold a summit with Russia because the US held one with Putin. ‘We let other people talk about arms control on our soil’, Macron claims to have told the other EU leaders attending the summit last week. ‘And we are not around the table. Funny conception of power’, he added. In short, the only substantive French argument for holding a summit now is to ‘keep up with the Joneses’.

Macron also claims to have been surprised by the fact that the Central and Eastern Europeans who opposed his latest Russia summit initiative did not seem to resist Joe Biden’s summit with Putin earlier this month. Yet, quite apart from the fact that this claim is inaccurate (Poland did express serious misgivings), the reality remains that many European states trust the US not to betray its allies in any negotiations with Russia more than they trust Germany and France to do the same.

If France and Germany wish to dispel suspicions about their motives, they must not launch such initiatives at the last moment, with no prior consultation. Such an approach can only provoke instant hostility and is guaranteed to fail. Nor would such initiatives wear the Central and Eastern Europeans down or bounce them into accepting a summit with Russia.

The only winner from this rather nugatory intra-European debate is the man sitting in the Kremlin.

Post Views: 213
Previous Poland and the US: An Alliance of Democracies, Readjusted
Next What Erdogan’s Tilt to the West Means for Russia–Turkey Relations