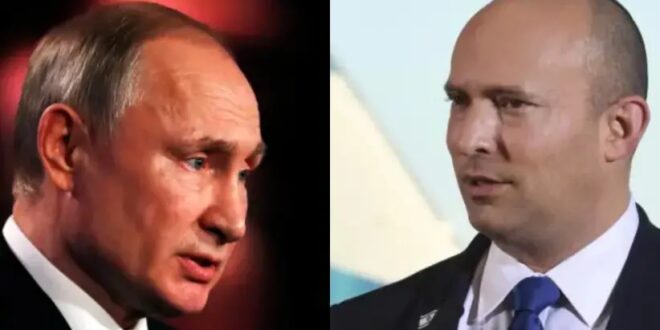 Bennett and Putin agree to meet during first phone call

Prime Minister Naftali Bennett and Russian President Vladimir Putin made plans to meet in the near future, when the two leaders held their first phone call on Monday since the new government was sworn in last month. No date was set for such an encounter.

Bennett and Putin “agreed to meet soon,” the Prime Minister’s Office said after the call.

Israel and Russia had close ties during the 12 years former prime minister Benjamin Netanyahu was in office. Putin and Netanyahu met and spoke fairly frequently.

At his faction meeting in the Knesset hours later, Bennett boasted that he had “strengthened Israel’s foreign relations and national security by holding a good conversation with Putin.”

According to the Kremlin, Putin wished Bennett “every success” and “both leaders expressed their mutual intention to develop the entire scope of friendly relations between Russia and Israel and agreed to maintain further contacts.”

Jerusalem and the Kremlin are at odds over the Iran deal, which Putin supports and Bennett does not – and neither agree on the Israeli-Palestinian conflict.

But the same was true of Netanyahu and Putin. Israeli-Russian ties have been particularly important with respect to Syria, where a deconfliction agreement exists to ensure that there is no exchange of fire during Israeli aerial strikes against Iranian positions.

Russia has also been helpful with Israel’s search for the remains of missing soldiers in Syria, assisting Israel in 2019 with the recovery of the body of IDF soldier Sgt. Zachary Baumel, who had been missing since 1982. The call also comes as Israel is pressing the international community to help ensure that Hamas returns the remains of two soldiers killed in the 2014 Gaza war and releases two Israeli citizens it is holding captive.

PUTIN AND BENNETT “discussed several security and diplomatic issues,” the Prime Minister’s Office said. Bennett thanked Putin “for the role his country is playing in maintaining regional stability and for the assistance on the issue of the captives and the missing,” it stated.

“The two also discussed the role of Russian aliyah [Jewish immigration] in Israel and the great importance that [Bennett] ascribes to it as a bridge between the two countries,” the office explained.

The prime minister also “expressed his appreciation for the historic bond between the Russian and Jewish peoples,” it added.

The Kremlin was careful to note that Bennett initiated the call, explaining that it “focused on topical issues of bilateral cooperation in politics, trade and economic and humanitarian affairs.”

“Special attention was paid to preserving the historical memory of the Great Patriotic War, preventing any attempts to review its outcome, to glorify Nazism, to deny the Holocaust and the Red Army’s decisive contribution to victory,” it added, referring the four-year-long WWII conflict between the Soviet Union and Nazi Germany.

Less than 24 hours earlier, Bennett also reached out to Israel’s key ally, the United States, with a special message for its 4th of July Independence Day celebration.

Bennett underscored the importance of bipartisan American support for Israel, highlighting his own special relationship with the US.

“I would like to thank all our friends in the US on both sides of the aisle for your steadfast support, both in times of peace but also in moments of tension in our region,” Bennett said in an English tweet.

NETANYAHU, who had studied and worked in the United States, often touted the importance of that experience in promoting US-Israeli ties.

Bennett on Sunday highlighted the manner in which his life story, as the child of American parents, exemplified US-Israeli ties.

“America holds a special place in my heart,” Bennett said. “My parents were born in California and continued their lives here in Israel.”

“I, too, enjoyed living and working in New York for part of my adult life. My story is just one example of many Israelis and Americans whose lives are intertwined through family business and social ties which underpin the special relationship between our two countries,” Bennett said.

The new government he heads is uniquely poised to work well with the US, the prime minister said.

“In Israel, we recently formed a new government that represents the Israeli people’s desire for political stability,” he said.

“It is also the most diverse government that Israel has ever had, bringing together folks from all factions into one united coalition,” Bennett added.

“This new government deeply values our relationship with the American people. We are committed to a spirit of strength and cooperation,” he explained. “We are going to work together very well.”

The July 4th holiday, Bennett said, “is a time to reflect on the values of freedom and human dignity in America’s Declaration of Independence.

“As we reflect on the past we also look forward to the future: a joint future of an even deeper friendship between our two nations, the United States of America and Israel, rooted in our shared values of freedom, liberty and democracy.”