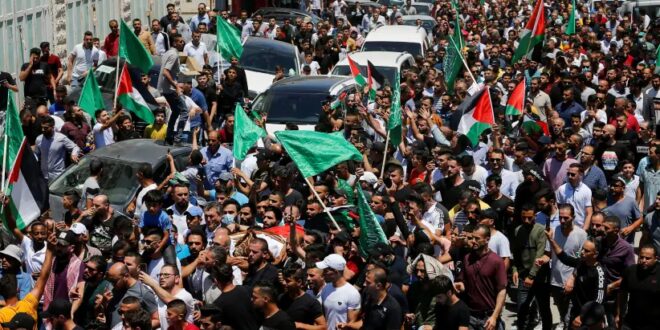 The PA newspaper denounced the demonstrations following the death of Nizar Banati, saying that protesters calling for President Mahmoud Abbas to step down are playing into Israeli agendas.

Commenting on the protests that erupted following the death of Banat, who was reportedly beaten by PA security officers in Hebron on June 24, during which the demonstrators called on PA President Mahmoud Abbas to step down, the newspaper accused them of working “in favor of an agenda calling for sabotage and chaos.”

In an editorial, Al-Hayat Al-Jadida denounced the protests as “demonstrations of deceit.” The protesters’ chants on the streets of Ramallah last Saturday were “characterized by obscenity and lack of unity and national and moral values,” it said.

Some of the protesters chanted slogans denouncing the PA security officers as dogs and calling for the departure of Abbas, “the head of the national struggle and constitutional legitimacy,” the editorial said.

According to the PA newspaper, the demand that Abbas step down is what Israel wishes for.

The calls “serve Israel and its aggressive racist goals,” it argued. “The language of obscenity was never, and never will be, the language of the Palestinian street. The demonstration in Ramallah was not in favor of Banat, but rather in favor of agendas calling for sabotage and chaos with the hope of repeating the scenario of the Arab Autumn, which was not an Arab Spring, so that Israel could enjoy the results.”

Meanwhile, a PA court in Ramallah ordered three Palestinian activists remanded into custody for 48 hours on charges of insulting Palestinian leaders, participating in an illegal demonstration and fomenting sectarian strife. Jihad Abdo, Ezaddin Za’loul and Salem Qatsh were arrested on Sunday in Ramallah while protesting against the arrest of another political activist, Ghassan al-Sa’di, by the PA security forces.

The four activists participated in the protests that erupted following the death of Banat.

Also on Sunday, the PA security forces arrested journalist Alaa al-Rimawi, a friend of Banat, on suspicion of giving an eulogy for the slain activist in a mosque without permission from the PA government. Rimawi’s family said he has gone on a hunger strike in protest over his incarceration.

PA Prime Minister Mohammad Shtayyeh on Monday said his government respects freedom of opinion and the freedom of journalists’ work.

In opening remarks during the weekly PA cabinet meeting, he said journalists have the right to work “freely and professionally and in accordance with national and international laws and regulations, away from hate speech and incitement.”

Referring to complaints by Palestinian female journalists that they had been subjected to physical assaults and sexual harassment by PA security officers while covering the anti-PA protests in Ramallah, Shtayyeh promised that “what happened will not happen again.”