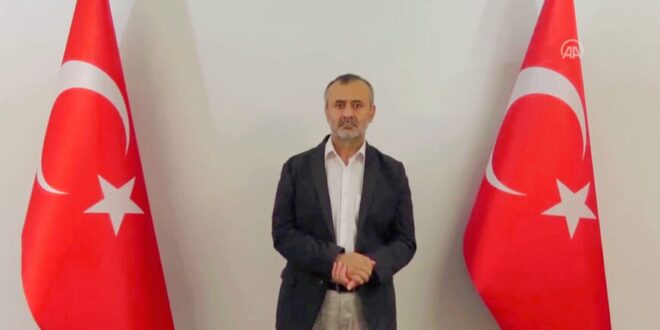 While the Kyrgyz government has denied helping Turkish intelligence services kidnap a Turkish-Kyrgyz educator, rights groups say it’s unlikely that he could have been taken otherwise.

Kyrgyz authorities have denied claims that they conspired in the kidnapping by Turkish intelligence services of a Turkish-Kyrgyz educator who went missing from Bishkek on May 31, yet another victim of Turkey’s illegal rendition of alleged terror suspects.

A spokesman for Kyrgyz President Sadyr Japarov said it was “absurd to speculate” that Kyrgyz authorities were involved in the kidnapping of Orhan Inandi. But rights groups say it’s unlikely that he could have been taken without their complicity.

Turkish President Recep Tayyip Erdogan announced on Monday that Inandi had been brought back to Turkey, the first time his whereabouts were known since his disappearance. Inandi was widely believed to have been held at the Turkish Embassy in Bishkek. It’s unclear when he was flown back to Turkey.

Erdogan proudly declared after meeting with members of his cabinet in Ankara that as a result of “unique and patient efforts,” Turkey’s national intelligence service had brought “a top Central Asian leader of FETO, Orhan Inandi, to our country to face justice.”

FETO is the acronym for the so-called “Fethullahist Terror Organization” named after Pennsylvania-based Sunni preacher Fethullah Gulen, a onetime ally of Erdogan. Turkey accuses Gulen of masterminding the failed July 2016 coup to overthrow the Turkish leader. It has since been pursuing members of his movement at home and abroad, prosecuting and jailing them by the thousands. Erdogan acknowledged that more than 100 such people had been rendered to Turkey by its intelligence service, the MIT, since 2016.

Freedom House, which has documented numerous such cases, asserted in a January report that Turkey has carried out such renditions in at least 31 different countries.

Human Rights Watch, which has been following Inandi’s case, said in a statement today that Turkish and Kyrgyz authorities had “abducted, forcibly disappeared, and extrajudicially transferred a dual Turkish-Kyrgyz national.” The New York-based watchdog said the actions “included egregious violations of international and domestic law” and “demonstrates again Ankara’s ruthless disregard for the rule of law in general.”

“That Inandi, a dual Turkish-Kyrgyz national, could be abducted and missing for weeks on Kyrgyz soil only to be illegally removed from the country by Turkey’s intelligence services suggests the Kyrgyz government is either unwilling or unable to stand up to Ankara or directly colluded with them,” said Hugh Williamson, Europe and Central Asia director at Human Rights Watch.

Kyrgyz officials deny any collusion. The Turkish ambassador to Bishkek was summoned to the Foreign Ministry over the affair. Japarov said in a July 6 interview that his government would demand Inandi’s immediate repatriation to his country. He added that since 2016, there had been three attempts to kidnap the 53-year-old teacher, most recently in early 2021. However, there is speculation that Inandi may have been spirited to Turkey on Japarov’s plane when the Kyrgyz leader met with Erdogan in Ankara on June 9.

A photograph of Inandi circulated to the media by the Turkish government showed a gaunt, unshaven man with dark circles under his eyes standing between two large Turkish flags. He wore a haunted look. His hands were clasped but, unusually for the circumstances, they were not in cuffs.

Inandi’s wife Reyhan, contacted by Al-Monitor in Bishkek via Whatsapp today, said she believed the reason his hands were not cuffed was because he had been tortured. “Notice how his right hand is swollen in the picture. They were obviously forcing him to sign something and he refused. Look at what they did to this man. He had beautiful hands. He has lost so much weight. May whoever did this to him be ripped to a thousands pieces, may the Almighty give them the punishment they deserve,” she said.

Numerous Gulen-linked suspects who similarly disappeared and surfaced in Turkish custody months later have alleged during their court hearings that they were held at black sites and tortured by their MIT captors. Several Gulen-linked individuals remain missing within Turkey proper. Yusuf Bilge Tunc, among tens of thousands of alleged Gulenists purged from the government, has been missing since August 2019. Huseyin Galip Kucukozyigit, another purged bureaucrat, has been missing since Dec. 29 last year.

Sebnem Korur Financi, a forensics specialist who has treated scores of torture victims in Turkey, also said that the condition of Inandi’s hand suggested that he may have been subjected to ill treatment. “We see that one hand is larger than the other We see a change of color on the larger hand. It might be due to some direct blows to the hand.”

Turkish authorities allege that Inandi, who has resided in Kyrgyzstan since 1995, served as the Central Asia “imam” for the Gulen network. Erdogan charged, “This individual, during his time in Turkey, took part in the secret cells of the organization. After joining its senior leaders, this individual invested FETO’s dirty money in Central Asia and used the brains that he poisoned to implement the organization’s dark agenda.”

Turkey’s state-run radio and television network TRT alleged that Inandi had secured 25 Kyrgyz passports for Gulen-linked fugitives and said that Turkish authorities had established that the educator had traveled to Pennsylvania numerous times to “receive instructions” from Gulen, most recently in March.

The Gulen movement has a network of 16 high schools, nine primary schools, a university and several college prep schools in Kyrgyzstan. Turkey has been leaning on Kyrgyz authorities to shut them down.

Inandi’s wife acknowledged that her husband made numerous trips abroad and that they may have included meetings with Gulen. “We are not concealing our identity, that we are members of the movement,” she said. But she rejected the government’s claims that her husband was involved in criminal activities. “The idea that Orhan had the power to issue Kyrgyz passports is laughable,” she said. “I applied for Kyrgyz passports for my two children two and a half years ago and we are still waiting to get them,” she added with a bitter laugh.