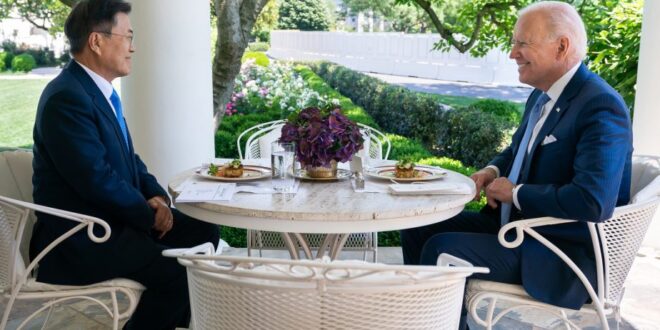 South Korea’s reticent response to the U.S. Free and Open Indo-Pacific (FOIP) strategy has been in the spotlight, producing mixed perceptions. South Korea’s geopolitical climate is dominated by the nuclear threat posed by North Korea but Seoul is also concerned about China’s growing assertiveness. Embracing the U.S. FOIP rhetoric would likely enrage Chinese leaders, who could decode Seoul’s commitment to the U.S. FOIP construct as a risky position taken up to counter Beijing’s growing influence. In 2017, Beijing was angered by U.S. anti-missile systems deployed in South Korea and retaliated against Seoul with economic measures.

South Korea’s economic dependence on China is rising, and Beijing is Seoul’s biggest trading partner, with exports totaling $13.4 billion in April 2021. South Korea not only needs China as its core trading partner but also as the primary leverage for Seoul’s North Korea strategy, given Beijing’s close ideological links and traditional friendship with Pyongyang. In April this year, China’s ambassador to North Korea, Li Jinjun, hailed the Sino-North Korea friendship as “enduring and unbreakable.” Without the participation of China in the North Korean nuclear issue, it seems unlikely that Seoul can secure Pyongyang’s presence at the negotiating table.

Seoul’s balancing act between Washington and Beijing is unsteady. South Korea has been considering the possibility of presenting a united front with the United States and other middle-sized powers in the Quad. In the latest South Korea-U.S. bilateral joint statement, published in May 2021, both countries agreed to “align the ROK’s New Southern Policy and the United States’ vision for a free and open Indo-Pacific’’ and committed to “maintaining an inclusive, free, and open Indo-Pacific.” This statement echoed the Indo-Pacific language addressed by defense ministers from both sides in March, though there was virtually no commitment to embrace the U.S. FOIP construct from Seoul. South Korea has appeared to avoid bilateral dialogues on the possibility of South Korea’s participation in the U.S. strategy.

South Korea’s endorsement of Indo-Pacific multilateralism is a matter of debate, especially when President Moon Jae-in, delivering a video message to China’s 2021 Boao Forum for Asia in April, called for joint efforts to strengthen multilateral cooperation in Asia. The onus to act is on Moon’s ruling party, as anti-China sentiment in South Korea is peaking, reaching 75 percent in 2020 according to the results of a survey conducted by the Pew Research Center. However, formally joining a U.S.-led coalition to challenge China in the region may destabilize bilateral relations between Seoul and Beijing. The enduring question for the Moon administration is how far it can go to develop its multilateral commitments without antagonizing China, while at the same time leveraging its middle power status in the Indo-Pacific.

Though South Korea is unlikely to go as far as Japan in joining a united front in a shared approach toward China, as stated in the Japan-U.S. joint statement in April, Seoul still has much room to navigate Indo-Pacific geopolitics. A three-pronged strategy can help bolster Seoul’s middle power resilience in the Indo-Pacific. First, South Korea should embrace the construct of the Indo-Pacific in its official documents and public foreign policy discourses by incorporating its traditional notion of middle powers, like strong support for multilateralism and willingness to act as a balancing actor or bridge-builder in the region. Aspects of this middle power approach could be further embedded in Seoul’s policies to send a clear-cut signal that it is committed to serve as a responsible stakeholder. As such, if the construct of the Indo-Pacific was embraced by South Korean leaders it would help stabilize expectations and advance Seoul’s multilateralism, notably via Seoul’s fostering of partnerships with like-minded countries and its longer-term commitment to engage with Indo-Pacific powers.

Second, Moon’s administration should be the first to extend its hand to the Biden administration. Since entering office in January, President Joe Biden has embraced a more nuanced approach toward South Korea. Contrary to Trump’s bombastic approach to the South Korea-U.S. relationship, the new administration’s flexible and restrained approach toward handling contentious issues with its allies has earned credit. One example is that Biden has not pushed Seoul to adhere its foreign policy to the U.S. FOIP construct. South Korea can work hand in hand with the United States in crafting the regional agenda, like deepening Seoul’s engagement with Washington on nontraditional issues, such as climate change.

By placing climate change near the top of his agenda, Biden has sought close cooperation with U.S. allies and like-minded partners. In January’s declaration pledging to put the climate crisis “at the center of United States foreign policy and national security,” Biden urged international cooperation on climate change, opening a promising prospect for South Korean-U.S. joint efforts to address this issue. South Korea could embrace the role of “climate bridge” in the Indo-Pacific, helping to foster the U.S. regional agenda given Seoul’s reputation as an active regional middle power. Seoul’s credibility in the eyes of regional countries would likely facilitate its niche diplomacy when it comes to addressing regional climate cooperation.

Third, the time is ripe for Seoul’s deeper engagement with Southeast Asian countries. Both South Korea and ASEAN share inclusiveness, a rules-based order, and a multilateral approach toward common interests and concerns in their Indo-Pacific visions. Among issues on which both parties can cooperate, taming the COVID-19 pandemic might prove to be of utmost importance. Several ASEAN nations are currently facing a surge in confirmed cases, making regional economic prospects gloomier. Southeast Asia had reported nearly 5 million coronavirus cases and over 96,000 deaths as of July 6, placing its economies under strain amid the spread of the Delta variant, originally detected in India. Investment and exports in Southeast Asian economies are likely to experience ongoing delays as border openings may not occur soon, making “Southeast Asian growth targets beyond reach.” The slow pace of vaccinations also makes the current situation worse, presenting a worrying scenario as infections climb.

The efficacy of South Korea’s COVID-19 navigation, which has been largely due to Seoul’s policy and institutional responses, should be shared among nations within its New Southern Policy (NSP). Additionally, South Korea should distribute medical and aid items to Southeast Asian states, especially those presently facing a surge in coronavirus infections. South Korea promised to help India during its surge in April in terms of sending medical materials, and received much credit. Now, it is ASEAN nations that should top Seoul’s priority list. South Korea’s medical outreach to Southeast Asia could leverage its deeper engagement with the region in line with Seoul’s stated commitment to a “people-centered community of peace and prosperity” with ASEAN. As South Korea’s NSP-Plus strategy, announced by Moon in November last year, entailed public health and nontraditional security issues in its seven key areas of cooperation, a reinforced commitment from Seoul can reassure ASEAN countries that South Korea would offer member states not only good words, but practical actions. South Korea’s slow response might cost the Moon administration’s reputation, as southern countries are looking to Seoul to play a firmer role in regional security matters.

A more active role by Seoul amid the latest COVID-19 surge in the region can bolster its engagement with the Indo-Pacific and enhance South Korea’s reputation as a responsible middle power. For a liberal democracy like South Korea, fostering multilateralism between Indo-Pacific countries will enable Seoul to enhance a strategic vision reflecting its interests and priorities in the region over the longer term. The three-headed strategy mentioned in this article can help Seoul to mold its middle power identity and Indo-Pacific commitment in line with regional principles and norms. The extent to which this perception matters to the South Korean government might depend on Moon’s strategic outlook and his promptitude to advance South Korea’s status as a resilient middle power.