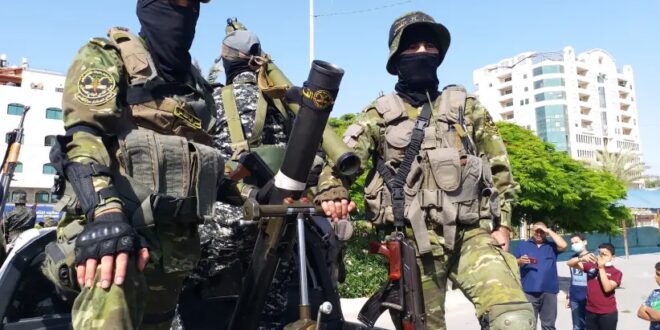 Palestinian Islamic Jihad (PIJ), the second largest terrorist group in the Gaza Strip, said on Saturday that it does not believe that another round of fighting with Israel is possible “at present.”

“The region is not ready for such a round,” said Mohammed al-Hindi, head of the PIJ politburo in the Hamas-ruled coastal enclave.

Hindi was speaking during a seminar organized in the Gaza Strip by the Atlas Center for Studies and Research, a Palestinian group that specializes in Israeli affairs. The seminar was attended by dozens of academics, political analysts and leaders of various Palestinian factions.

Referring to last May’s 11-day war between Israel and the Gaza-based Palestinian factions, Hindi said that the “battle of the Sword of Jerusalem has not ended yet.”

Hamas named the war “Sword of Jerusalem,” while Israel chose the name “Guardian of the Walls.”

According to Hindi, the war showed that the Palestinians support the “option of resistance” against Israel. The Palestinians, he said, will “foil all attempts to steal from them the achievements of the battle.”

Hindi claimed that before the war, there were attempts to end the Israeli-Palestinian conflict “in favor of the Zionist enemy and transform the Palestinian cause into an economic peace issue.” He did not provide details about the alleged attempts or the parties ostensibly behind them.

Hindi praised the Arab citizens of Israel for joining the protests against the war, “thus strengthening the unity of the Palestinian people in the face of a common enemy to defeat it with jihad (holy war) and resistance.”

The war also resulted in a major and profound shift in international and regional public opinion in favor of the Palestinians, Hindi claimed.

But, he cautioned, the war has not stopped: “The Zionist enemy does not want to acknowledge and absorb its defeat; it is trying to regain the initiative by continuing the aggression in Jerusalem, the West Bank and al-Aqsa Mosque, and by continuing the siege of Gaza.”

Hindi criticized the Palestinian Authority for failing to “defend the Palestinian national enterprise.” He warned of attempts by international and regional parties to resume the peace process between the PA and Israel.

He further criticized the PA over its position toward the reconstruction of the Gaza Strip, saying it is “corrupt and incapable of managing this file.”

The PA has demanded that its Ramallah-based government alone be responsible for the reconstruction. It has also demanded that any funds to the Gaza Strip be directed only through the PA government.

“The conflict with the occupation is a struggle of will, that the Palestinians are waging with awareness and responsibility,” Hindi added. “We seek to drain the enemy at all levels and expose its deficient reality and its weak psychological reality.”