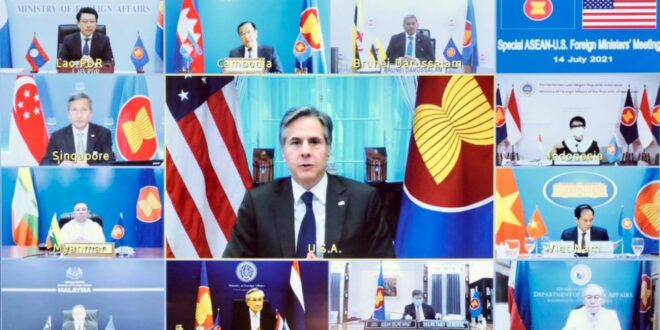 The meeting highlighted where U.S. and Southeast Asian interests align, and where they part ways.

Myanmar, the COVID-19 pandemic, and the South China Sea disputes have topped the agenda in discussions held yesterday between the U.S. Secretary of State Antony Blinken and his 10 Southeast Asian counterparts.

The Special ASEAN-U.S. Foreign Ministerial Meeting, held by video link yesterday, was the first high-level meeting that the U.S. has held with the Southeast Asian bloc since President Joe Biden took office. A similar planned hook-up in May was postponed after Blinken experienced connection issues while on board a flight to the Middle East.

As per the State Department readout, Blinken staked out strong positions on China’s expansive claims over the South China Sea. Coming two days after he reaffirmed a Trump-era rejection of China’s claims over the vital seaway, he “underscored the United States’ rejection of the PRC’s unlawful maritime claims in the South China Sea and reiterated that the United States stands with Southeast Asian claimants in the face of PRC coercion.”

Blinken also expressed his “deep concerns” about the political crisis that has followed the military coup in Myanmar, and urged the Southeast Asian bloc to take action to ensure the “end of violence, the restoration of Burma’s democratic transition, and the release of all those unjustly detained.”

Blinken described ASEAN’s five-point consensus, formulated at a special meeting in Jakarta in April, as “an important step forward” and urged ASEAN “to take immediate action to hold the Burmese regime accountable to the consensus and to appoint a special envoy.” He also called for the release of all those who were “unjustly detained”.

The meeting comes amid rising concerns that the Biden administration has done little to engage ASEAN since taking office in January, focusing instead on the Quad grouping, which includes Australia, Japan, and India. According to the State Department, Blinken and his ASEAN counterparts “pledged to continue building the ASEAN-U.S. strategic partnership based on human rights and fundamental freedoms, economic prosperity, and strong people-to-people ties.”

By foregrounding the unlawful nature of Chinese maritime claims and the crisis in Myanmar, and placing “human rights and fundamental freedoms” at the center of ASEAN-U.S. relations, Blinken’s comment was consistent with the Biden administration’s framing of U.S.-China rivalry as one front in a global struggle between democratic and authoritarian governments.

As I’ve noted previously, however, this is a framing that fits awkwardly onto a region in which few – if any – of the incumbent governments can be described as consolidated liberal democracies.

Differences of emphasis were reflected in the comments made by Blinken’s ASEAN counterparts, which generally focused on the concrete challenges of COVID-19, particularly the importance of equitable vaccine access, given the region’s current surging outbreaks of the virus.

On his Twitter account, Malaysian Foreign Minister, Hishamuddin Hussein expressed his appreciation for Washington’s “announcement supporting the waiver of patent protection of #COVID19 vaccines,” while Philippine Foreign Affairs Secretary Teodoro Locsin was characteristically effusive about the waiver, as well as the Biden administration’s offer of cash and vaccines to lower-income countries through the World Health Organization-backed COVAX initiative.

“President Joseph Biden, in the manner of Franklin Delano Roosevelt, announced that the U.S. will be an ‘arsenal for vaccines for the rest of the world’ – which is to say, it will be the arsenal of humanity against its extinction,” Locsin said, according to Bloomberg.

While Indonesian Foreign Minister Retno Marsudi hailed the importance of U.S. engagement to “ensuring peace and stability in the Indo-Pacific region,” alongside the importance of its help in the fight against the pandemic and ensuring a “green recovery” from COVID-19, few other nations’ statements mentioned the South China Sea disputes. Some instead opted for references to “regional and international issues of mutual concern,” as it was put in a statement from Singaporean Foreign Minister Vivian Balakrishnan. Cambodia’s Ministry of Foreign Affairs used a similar formulation in its statement.

Similarly, while Balakrishnan’s statement reiterated Singapore’s “full support” for the bloc’s five-point consensus for resolving the Myanmar crisis, and said “constructive engagement will go further in facilitating a return to normalcy in Myanmar,” few Southeast Asian foreign ministers spoke in any depth about the country’s situation.

This likely reflects the deep divisions between the ASEAN nations on how far to intervene in the affairs of their fellow member state, as well as the fact that the Myanmar junta enjoys an effective veto over any policy directed against it. (Indeed, the junta’s foreign minister, Wunna Maung Lwin, was invited to, and attended, yesterday’s video hookup as the legitimate representative of Myanmar.)

In many ways, the meeting offered a representative glimpse into where interests between the U.S. and its ASEAN partners converge, and where they part ways. While the U.S. has rhetorically framed its struggle with China as a binary opposition of virtuous American leadership and sinister Chinese revisionism, and expects much of the world to view things the same way, Southeast Asian nations are generally more pragmatic and situational in their relations with the two superpowers.

Each has their own areas in which they desire a more robust American cooperation and engagement, and where they and the U.S. government disagree. Indeed, much the same is true of their relations with China. The meeting thus also spotlighted Southeast Asia’s challenge: how to secure and maintain a robust U.S. counterweight to China’s growing power, and American cooperation of issues of mutual interest, while also continuing to enjoy the economic benefits of trade and investment with Beijing.