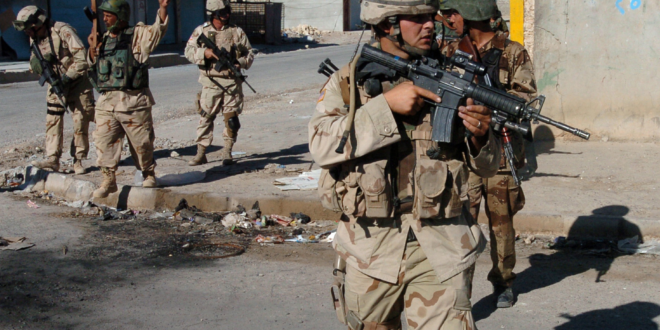 No, the U.S. military is not ‘leaving’ Iraq

Officials have announced an ‘end’ to the combat mission, but this appears to be a shift in definitions rather than a real withdrawal.

Iraqi and U.S. officials have been talking about the end of a U.S. combat mission in Iraq, but they appear to be changing definitions rather than trying to withdraw troops.

On Thursday afternoon, Politico and the Wall Street Journal reported that U.S. combat troops will leave Iraq by the end of this year, citing Iraqi and U.S. sources. But the U.S. combat mission in Iraq was already declared over in April. In reality, as Politico reported, the combat troops leaving will get redeployed elsewhere and be replaced by non-combat personnel who will remain in Iraq “indefinitely” to “provide logistics and advisory support,” according to Politico.

As one anonymous U.S. official told the Wall Street Journal, the decision is “not really a numerical adjustment but rather a functional clarification of what the force would be doing.”

There are about 2,500 U.S. troops in Iraq, leading an international coalition against the Islamic State.

The efforts appear to be designed to take pressure off Kadhimi, who has faced domestic calls to remove U.S. troops from the country since last year.

The Iraqi parliament quickly passed a non-binding resolution asking U.S. troops to leave, while pro-Iranian factions vowed to expel the Americans by force. Over the next year and a half, militias have shelled U.S. bases numerous times, and the U.S. military has responded with sporadic airstrikes.

For all the pressure to push out U.S. forces, Kadhimi also has reasons to want them to stay. U.S. troops are partners in the fight against the Islamic State. They are also a counterbalance to the pro-Iranian militias, who have not only challenged the U.S. presence but also flouted Iraqi government authority and murdered their political opponents.

Meanwhile, the U.S. military insists that it has the authority to fight the Islamic State under several U.S. laws. But there is no legal basis for a war against Iran or its allies, which has left Congress increasingly uncomfortable with the military’s actions in Iraq.

And all of the tensions in Iraq are taking place against the backdrop of U.S.-Iranian diplomacy. The two countries are seeking a deal to lift the U.S. economic pressure campaign against Iran in exchange for Iran rolling back its nuclear program.

“Iran is a bad actor in the region, and they have taken part in and supported and participated in extremely problematic behavior,” White House press secretary Jen Psaki said last month. “At the same time, we feel that we’re moving forward, and seeking the opportunity to move forward on negotiations to prevent Iran from acquiring a nuclear weapon.”

Post Views: 92
Previous Don’t let the generals dictate the war’s legacy, make them answer for it
Next If Biden can’t stand up to Saudi Arabia, then Congress should, and now