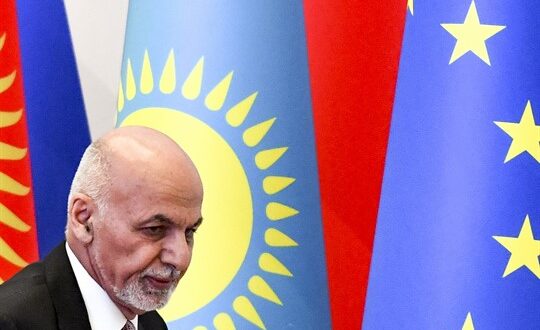 Afghanistan’s Collapse Begins at the Top

If we are to believe American intelligence assessments leaked this week, it is only a matter of time before Afghanistan’s capital, Kabul, falls to the Taliban. Judging by the worrying news from several of my Afghan friends and colleagues who are now all clamoring to get out of the country, it could even be a couple of weeks. For some, it’s shocking to think that the city of roughly 5 million at the center of the country’s heartland could soon be the next to fall, after the Taliban’s aggressively swift push to seize control of provincial capitals in the north.

But for close watchers of the political churn that has unfolded all summer inside Afghan President Ashraf Ghani’s Cabinet and the Afghan security agencies, the impending collapse of the seat of the Afghan government was entirely predictable. There is no sugarcoating the facts. Ghani’s government is in free fall, and the leadership ranks of Afghanistan’s security services are in complete disarray.

On Wednesday, Ghani announced the ouster of Afghanistan’s minister of defense, Hayatullah Hayat, and the elevation of Gen. Bismillah Khan Mohammadi as his replacement. A graduate of the Kabul Military Academy and former member of the Soviet-backed People’s Democratic Party of Afghanistan, Khan has been gunning for the Afghan military’s top post ever since he was appointed army chief of staff in 2002. Ghani also replaced the outgoing army chief of staff, Gen. Wali Ahmadzai, with Gen. Hibatullah Alizai, who only eight months ago became commander of the country’s elite Special Operations Corps.

The shakeup at the top of Afghanistan’s army was only the latest in a series of signs that Ghani’s hold on key elements of government power is weakening. Earlier this week, Afghan social media was abuzz with the news that a former Afghan senator and well-known pro-government militia chief, Mohammad Asif Azimi, had defected to the Taliban, leaving the northern province of Samangan to fall to their control. This week’s reshuffle came as Ghani made an emergency visit to the northern city of Mazar-i-Sharif and the Taliban continued to overwhelm strategic government strongholds across the country.

While all eyes are naturally drawn to the spectacular violence and scenes of carnage from the Taliban’s rapid territorial advance across the country, the greater threat to Afghanistan’s stability has always been the fecklessness of so many in positions of power in the Afghan government. This includes Kabul’s new defense chief, Khan, who despite his reputation as a strong and capable military officer is well known among Afghan hands as a central player in the long-running, soap opera-like dramas and ethnically driven factional divides within the Afghan National Defense and Security Forces, or ANDSF.

Khan began his career as a well-regarded officer who then rose quickly through the ranks of the anti-Soviet mujahedeen forces during the first Afghan civil war in the 1990s. Later he became a confidante of Ahmad Shah Massoud, helping the legendary “Lion of Panjshir” build the anti-Taliban Northern Alliance into a wall of resistance in the northern Panjshir mountains. As a central member of the Northern Alliance’s Shura-e Nazar supervisory military council, Khan served as the primary military liaison for Kabul and the nearby provinces of Parwan and Kapisa during the fight to retake the country from the Taliban the first time around. Years later, when Afghanistan’s long-time military strongman and minister of defense, Mohammed Fahim, died in 2014, Khan became the de facto head of one of the most important factions in the Afghan military—the shadowy remnants of the Shura-e Nazar council—and inherited the backing of influential Northern Alliance leaders like Younus Qanooni, a former speaker of the Wolesi Jirga, Afghanistan’s lower house of parliament.

In fact, it was Khan’s strong ties to the Northern Alliance that frequently put him at odds with Afghanistan’s first minister of defense during the early post-Taliban era, Abdul Rahim Wardak. An ethnic Pashtun who trained in the United States, Wardak often favored his fellow Pashtuns for leadership positions, and his antipathy toward Khan was frequently a source of friction among mid-ranking officers. For years, Khan and Wardak battled over everything from staff appointments to military materiel, and Khan’s network of loyalists at the brigade and battalion level was believed to have a chokehold on how the Afghan army operated.

I remember how frequently Khan’s name came up during my field trips to visit Afghan army bases across Afghanistan while researching a 2010 report for the International Crisis Group about the state of the Afghan army. Most Afghan officers I met were careful in their criticism of him. But Khan, who is best known by his initials “B.K.,” was like a curse word in the mouths of the American, British and Canadian military advisers I met along the way. It was widely believed among NATO commanders that Khan was on the take, at the top of an elaborate, highly factionalized military mafia that was linked to all manner of corruption and pilfering of American and NATO military aid. I vividly remember several high-ranking American military officers tick off the list of Khan’s many foibles and wishing aloud that he be removed. Yet, on as many occasions, I was also told that firing Khan might lead to even deeper divisions within the ranks and even the collapse of the Afghan army itself.

Then there is Ghani’s vice president, Amrullah Saleh. If there is one person who is likely to have strongly supported Khan’s appointment as minister of defense it would likely be Saleh, Massoud’s former English translator and, for many years during and after Massoud’s death, the Northern Alliance faction’s chief liaison to the CIA. Saleh—who also at one time headed Afghanistan’s intelligence service, the National Directorate of Security, or NDS—has never made any bones about his vehement distaste for reconciliation with the Taliban. Smart and tough as nails, Saleh still wields significant influence over key factions in the Afghan security services, and his sharp strategic mind and blunt manner have earned him a considerable amount of respect and loyalty.

If there are any two insiders in Ghani’s Cabinet who are more ready to meet this most perilous moment in the country’s history, I do not know them. Khan’s dubious reputation and Saleh’s hard-line embrace of harsh interrogation techniques while head of the NDS notwithstanding, the two have historically shown themselves to be fiercely determined to use any means necessary to defend Kabul. The question is whether other parts of Ghani’s leadership circle can, or indeed, should hold. For months now, officials in both Pakistan and the United States have been pressuring Ghani to remove his national security adviser, Hamdullah Mohib, from his post. Tensions between Mohib and U.S. State Department officials first broke into the open two years ago amid an impasse over talks between Ghani’s government and the Taliban. Then, in late May this year, Pakistan’s army chief of staff, Gen. Qamar Javed Bajwa, reportedly told Ghani that he would no longer meet with Mohib after Mohib apparently accused Pakistan of backing the Taliban and likened the country to a brothel.

Reading the tea leaves, it may not be very long before Mohib, too, is forced to go. But even if he survives politically, there’s no guarantee Ghani’s government will. Realistically speaking, the time left on Ghani’s political clock is ticking down fast. If Kabul falls as predicted, there’s no telling what will happen to him. We can only hope he does not meet the same fate as his long-ago, Soviet-era predecessor, Mohammed Najibullah, who met a particularly gruesome end when the Taliban seized Kabul in 1996.

There are good reasons to believe that the Taliban leadership in Doha would try to avoid such a spectacle this time around. After all, the U.S. and European Union would almost certainly withdraw aid to Afghanistan and sanction the Taliban again if Ghani’s exit was anywhere near as ugly. The White House has, in fact, said as much. However, there are equally good reasons to believe that high-ranking members of the Taliban’s military council across the border in the Pakistani cities of Quetta and Karachi may have different ideas about what should happen to Ghani and his close circle should the Taliban take the Afghan capital. There really is not much evidence that the Taliban would act with discernment and discipline when faced with the prospect of dealing Ghani—and by association his U.S. allies—a hard blow for all the world to see.

U.S. President Joe Biden is absolutely right to keep insisting that there is no reversing course on the American pullout from Afghanistan now. Nothing the U.S. does at this point on the military front will substantially change facts on the ground in a way that will have lasting impact on the Afghan government’s strategic weakness. Yet, although Ghani’s leadership style and choices are clearly a sore point for Washington, the White House and senior officials at the State Department and Pentagon need to start asking themselves, if they haven’t already, what it will look like if Ghani is left to twist in the wind.

Then they need to put the same question very bluntly to leaders in Pakistan, China, Iran, India and Russia, who are all jockeying for a pole position in a post-U.S., Taliban-run Afghanistan. After all, the fall of Kabul is not just some far-off, distant abstraction. It is closer than anyone but the Taliban would like, and it will have serious repercussions that will stain the hands of everyone involved in the failure of the negotiations in Doha and the collapse of Afghanistan.

Post Views: 213
Previous Beyond Business as Usual in Israel-Palestine
Next The U.S. Is Leaving Behind a ‘Nightmare’ in Afghanistan