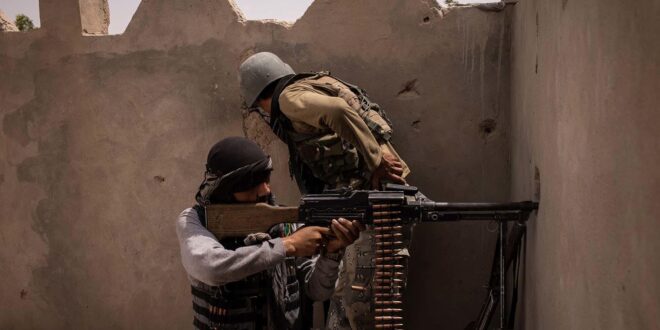 Can the Taliban Be Stopped? Three Scenarios for What’s Next in Afghanistan

No matter where the conflict goes from here, Afghans will bear enormous costs as stability looks to be a distant prospect.

The Afghan government has had its most difficult week fighting the Taliban since the insurgency began. As of this writing, 12 provincial capitals have fallen since last Friday, marking the first time the Taliban have controlled a city since they were ousted in 2001. By some estimates the Taliban control two-thirds of the country. While many experts predicted that the rapid and unconditional withdrawal of U.S. troops would increase Taliban control, few saw it happening this fast. A Taliban takeover of Kabul — once thought to be years away if at all — is now conceivable within months, or even a matter of weeks.

While Afghan government forces struggle to slow Taliban momentum, Afghan civilians are suffering most. Civilian casualties have soared during the most recent Taliban offensives and there are reports of widespread Taliban atrocities, signaling a return to the darkest times of the militant group’s rule. Recent reports of summary executions of captured Afghan soldiers, beating women who are considered to be immodestly dressed, forced marriages, and assassinations of civil society leaders and journalists have created a sense of panic among the population and led to a massive crisis of internal displacement.

Looking ahead, there are three possible trajectories for the conflict:

Unfortunately, all of these scenarios have enormous human costs for Afghans and are unlikely to produce stability any time soon. If the Afghan government holds out, it will remain weak and fragile and Taliban momentum will need to be reversed or stopped for a while before it is likely to negotiate any serious compromise political settlement.

If the Taliban are able to take control more rapidly, it will face even more daunting governance challenges: the Taliban alienate some ethnic groups, the vast majority of Afghan citizens do not want to live under their rule, they are unlikely to attract significant donor aid given recent atrocities and repressive policies, and they have no apparent plan or experience running a modern state. Even if it takes some time for routed anti-Taliban forces to regroup, a counter-revolution seems inevitable unless a balanced and inclusive political settlement can be reached.
Where to Go From Here?

Slowing the Taliban’s momentum is no easy task — but no one in the region wants to see a Taliban takeover or benefits from the aftermath of the fall of Kabul. As the Taliban advances, Washington should do the following: