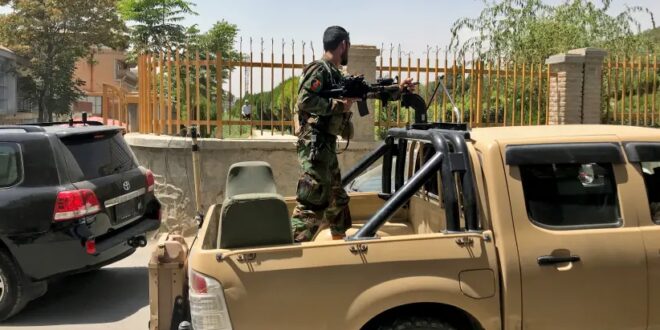 Afghanistan debacle message for US allies, including Israel – analysis

We know what that shop looks like in places like Lebanon, it’s a bankrupt operation. The US needs to reassure allies that it will stick by the region in this difficult time.

The rapid fall of Afghanistan and the way in which US political and military officials, as well as experts from various think tanks, were shocked by the rapidity of the collapse is symbolic of a larger challenge facing the United States today.

After Afghanistan, the US will have to reassure allies and partners that it will remain somewhere in the world. As American officials speak about “forever wars” and wasting “treasure” around the world, there are concerns about what comes next.

This is particularly true in the Middle East, where America’s partners and allies wonder if the US only sees countries here as “interests.” The talk of the US taking a tougher line on Saudi Arabia and Egypt, two countries that once formed a pillar of US foreign policy, is leading to concerns.

US support for the Abraham Accords is also a key issue. The new US administration won’t even call the Israeli peace deals by their name, but it has put out messaging praising the normalization Israel now has with Gulf states and Morocco.

Concerns about the US role in Iraq and Syria are on people’s minds too. Will Afghanistan erode more confidence in Washington and its claims to still be committed to the region?

The US has a long track record of intervention in various countries over the last several decades. These conflicts, called “small wars” or “long wars,” tended to be a result of the end of the Cold War and 9/11.

That means the US practiced humanitarian intervention and nation-building and then transitioned to preempting Iraq from acquiring weapons of mass destruction and fighting a global war on terrorism. Much of this turned out to be a myth, as has been seen in Afghanistan.

Nations were not built. Wherever the US has intervened, the countries have generally become chaotic, poor, Hobbesian disasters.

From Iraq to Syria, from Afghanistan to Somalia, from Haiti to Panama, the US has sent forces to many places, and they have generally not improved afterward. That may not be due to US intervention; the interventions may have simply been a symptom of chaotic world order, the rise of extremism and ungoverned spaces.

For instance, the chaos in Libya today may not be the fault of the intervention. Neither can the chaos in Yemen be blamed on the US. But the US is a factor, and its apparent mismanagement, or its failed attempt to build local security forces, raises many questions. Where was the Afghan air force over the last month and a half?

US President Joe Biden in July said the Afghan army had 300,000 troops who were “as well equipped as any army in the world” and that it had an air force. But the air force was a handful of helicopters. In general, the US didn’t bequeath a real air force.

Images from Afghanistan’s provinces show poverty and neglect. Twenty years didn’t result in much, it seems. Americans are wondering where the billions of dollars went. They see this as another example of Washington being misled or misleading them. They want the money spent at home on infrastructure.

America is not only talking more about isolationism, a theme that runs throughout US history and gained traction under the Trump administration’s “Make America Great Again” slogan. American’s Left and Right tend to agree it’s time for the US to look inward and that foreign policy should focus narrowly on interests.

Is it in our interest? What are we doing, and why are we doing it? Those are questions being asked. As those questions are asked, the US appears to be jettisoning one after another of its partners, or at least putting them on notice that the clock is ticking. Show us that you’re in our interests or you’re done is the message.

This happened in Eastern Syria in 2018 and 2019. Driven partly by pro-Turkey elements in the US State Department who wanted to end US efforts in Syria in competition with US Central Command, the US policy ended up being a partial withdrawal.

Genocidal jihadists backed by Ankara invaded areas the US had help secure with the Syrian Democratic Forces. These SDF partners had helped liberate Raqqa from ISIS. But US officials called the partnership “temporary, tactical and transactional.”

Even today, it’s possible the US may leave Eastern Syria if it doesn’t see some unnamed progress. That puts the people on edge, as the people in Kabul were, wondering what comes next and hedging their bets.

The US calls this “interests,” but it’s unclear why handing an area to US adversaries is in US interests. The political capital of having people trust and rely on Washington is important, but it is being squandered.

In Iraq, the US faces the same problem. US friends and partners are evaporating or hedging their bets. In the Kurdistan Region, which came into being partly with US air support in the 1990s, there are a lot of concerns that the US won’t remain. Pro-Iranian militias have targeted Erbil, ISIS is still festering, and Turkey is bombing some areas.

Meanwhile, in the Gulf, the US is also facing concerns that it is not sufficiently supportive of the Abraham Accords.

Hhere appears to be some hedging now in Riyadh in regard to talks with Iran. Saudi Arabia is facing the Iranian-backed Houthis in Yemen. It may seek to find a deal.

Egypt may be shifting its outlook as well, seeking a greater role in Horn of Africa. Sudan may be patching things up with Turkey as it has wanted more support after it also agreed to relations with Israel. But it needs investment.

The US talks more these days of “near-peer” adversaries and a desire to confront Russia and China. However, many countries wonder what commitments the US has in return when it asks friends and partners to help it in this rivalry.
When the US refuses to even see countries as allies, but calls them “interests” and then asks them to help with confrontation with Russia and China, many countries wonder what happens when the US shifts policies, and the “interests” no longer align. These countries are asking themselves if it is in their “interest” to confront China or Russia or Iran.

This has ramifications for Israel because Israel views itself as a close ally of the US. The US-Israel relationship has also grown in recent years, and Israeli defense companies are now world leaders in technology, including artificial intelligence, drones, radar, optics, missiles, air defense and targeting pods.

Israeli companies partner with their US friends on a variety of projects. This is true now in how Rafael Advanced Defense Systems works with Raytheon, for instance. In July, Lockheed Martin and Israel Aerospace Industries said they had entered an MOU that will form part of a strategic agreement to work together on air defense. Elbit Systems supplies helmets for the F-35s. This is all very important.

On the surface, Israel-US relations are the best ever. There are more joint exercises than in the past. US officials frequently meet Israeli counterparts. This means the Afghanistan debacle doesn’t have immediate implications. In fact, a smaller US footprint and less US bases ostensibly means the US needs Israel more than in the past.

A stronger Israel is now not just in US interests; it plays a greater role in the region. This is true also because so much of the region is made up of weak or failing states or places occupied by Iranian proxies. Israel sits on the doorstep of Lebanon, which is as good as bankrupt, and on the border with Syria, where conflict continues.

The US has a base at Tanf near the Jordanian border, not far from Israel. While US bases in Qatar, Bahrain and the UAE are not in doubt, there are questions about how close the US is to Riyadh and Cairo these days. Meanwhile, Israel and the UAE are fostering close relations with Greece and India, countries the US is also working with.

The big question after Afghanistan is how the US will show that it is really committed to stability and security, whether that is off the coast of Taiwan or off the coast of Oman, where a ship was recently attacked by a drone.

Countries are testing US resolve. The US looks to be in a bind after the debacle in Kabul. How did 300,000 Afghan soldiers disappear? Was it a ghost army? And if it was, what does that say about US training of Iraqi forces and of the Palestinian security forces, the latter of which was done through the USSC, or what was once called “Dayton’s Army.”
If the Palestinian Authority faces challenges, will the Palestinian security forces be up to the task? And what becomes of Eastern Syria and the SDF, another key force the US helped support? This matters because enemies, such as Iran, want to move into any power vacuum in the region and set up shop.

We know what that shop looks like in places like Lebanon. It’s a bankrupt operation. The US needs to reassure allies that it will stick by the region in this difficult time.