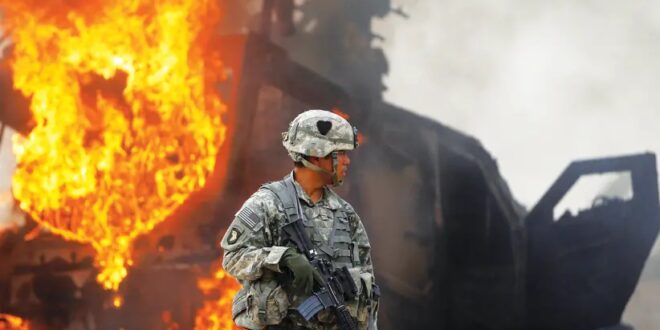 Unpredictable consequences from the Afghan crisis

As China, Russia, Iran and others rise to the occasion, the ascent of the Taliban may signal a post-American world order

The US withdrawal from Afghanistan and the rapid advance of the Taliban are not necessarily a simple cause and effect. The US had very few troops in Afghanistan, and they weren’t doing much fighting for years. The Taliban appear to have planned a massive offensive, unlike anything seen in the past, likely with foreign intelligence and other support, after having sent delegations to Russia, China, Iran, Qatar and Pakistan.

This means that what is happening has unforeseen consequences. There are many unanswered questions. The New York Times claims that “few will gang up on the U.S. for finally stopping a failed enterprise.” But in the longer term, “the notion that you cannot count on the Americans will strike deeper roots because of Afghanistan.’’ This may underpin some European reactions, according to the article. What is more perplexing is that other NATO members, including European countries, also withdrew from Afghanistan and yet, oddly, this doesn’t erode confidence in whether anyone can count on NATO or European countries. The unspoken point may be that no one was counting on NATO or European states anyway, so it was America’s war to lose.

There are many arguments floating around now about whether things had to turn out this way in Afghanistan. An article at The Dispatch by Paul Miller argues it didn’t have to end like this. The US could have kept training the Afghan army until it was ready to fight. They could have given Kabul more leverage in discussions with the Taliban.

It’s hard to know. Many countries appear to be rushing in to feast on the failure. Turkey wants to have discussions with the Taliban and run the airport. Iran, working with China, sees a silver lining in Afghanistan. As Pakistan, Russia, Iran, China and Turkey prepare to rush in, European countries are evacuating embassy staff.

The question that remains is not about assigning blame or even figuring out why the Afghan army appears to have disintegrated, if such an army even existed in the first place. The question is what may be the unpredictable or unforeseen consequences. The long term consequence may be that the Afghan War symbolizes a global shift away from US power. The US became a global hegemon in the wake of the Second World War and Cold War and that has led to the construction of an American world order based around US allies and partners from South Korea to Israel, from NATO to US bases that used to be in place like Afghanistan. As the US withdraws, there are calls for more American withdrawals, such as from Iraq and Syria. The consequences are not just the immediate power vacuum or empowering US adversaries, and not just a blow to US reputation.

The fact that in each case, when there is a withdrawal, the US footprint is filled by Russia, Iran, Turkey or other adversaries of the US is the real challenge for Washington. Turkey, for instance, is a member of NATO but is buying Russia’s S-400 and is working with Iran, Russia, Pakistan and China. Pakistan, another country that is ostensibly a US partner, has fuelled three generations of anti-American haters, from aiding the Taliban to hosting Bin Laden, or fueling extremism, far-right blasphemy laws and religious fascism. The US, as it grew to be a global superpower, worked with many countries that came to hate and loathe the US and which fueled local groups that hate the US. They often took US aid and weapons while sponsoring organizations that support terror against the West and tend to ethnically cleanse minorities, throw acid in the faces of women, and take rights away from people.

These contradictions in US policy, sending forces to Syria, Iraq and Afghanistan, but turning the other cheek to Ankara’s aggression, Pakistan hosting the Taliban or Iran killing US forces in Iraq, has made these missions complex. The lesson everyone learned is that countries can fight the US and have no real consequences. Waiting in the wings have been China and Russia, sponging up areas where the US once had influence, from Africa to Asia.

The rise of the Taliban, again, may be a local problem and the Taliban may not play host to global jihadist movements like Al-Qaeda again. That is because the conditions that gave rise to Al-Qaeda and the way it raised money and disseminated information has changed. Al-Qaeda had supporters across Europe and the Middle East. Today, countries that once quietly backed Al-Qaeda have turned on these extremists. That means that Afghanistan may not become a terror hub. The real consequence may be more complex. Afghanistan may simply become a host for the gathering storm of a post-American world order. Regional groupings like the Shanghai Cooperation Organization and others will not include the US. This is just like how Russia, Iran and Turkey excluded the US from discussions about Syria. There is a rush by China and Russia to create international forums where the US is not present. US President Joe Biden is saying “America is back” and he wants to rebuild US infrastructure and the US Navy to confront a rising China. But it is unclear if the US dawdled in the war on terror, wasting money in places like Afghanistan, while not seeing the elephant in the room.

These may be the unforeseen consequences of Afghanistan. Insurgent and proxy groups backed by Iran, Turkey or others may increase global chaos in some places and quietly eat away at liberal international structures. That is why Iran feels free rein to attack ships off the coast of Oman. These incidents are symbolic, and they may be linked to the rise of the Taliban again in Afghanistan.

Post Views: 258
Previous The US should have learned from IDF withdrawals – analysis
Next Afghanistan debacle message for US allies, including Israel – analysis