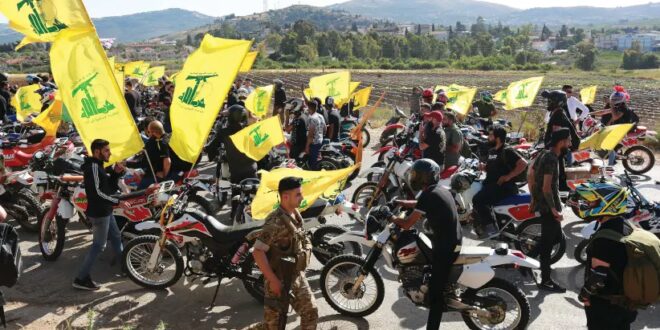 Lebanon is falling deeper into an economic and social black hole. While Hezbollah is not immune to that crisis, it is still able to play with fire and attack Israel.

It’s been a week since rocket-warning sirens alerted Israelis to the dangers of the collapse of Lebanon: a salvo of 20 rockets fired by an emboldened Hezbollah toward northern Israel.

Rocket-warning sirens were activated in northern Israeli communities along the Lebanese and Syrian borders, including Ein Kuniya, Neveh Ativ, and Snir, near the northern border with Lebanon and Syria.

The Iron Dome missile defense system intercepted 10 rockets, with six falling in open areas near Mount Dov on the Lebanese border. The others fell inside Lebanon.

The rocket fire was the sixth such event since May but by far the most serious and the first time that Hezbollah said that it had fired.

THE CRUMBLING of the Lebanese state was seen in the IDF as a restraining factor against the Shi’ite terrorist group, but that assessment given to reporters less than a month before the rocket fire has now been shaken.

In a speech, Hezbollah Secretary-General Hassan Nasrallah warned Israel against thinking that the group is too preoccupied with Lebanon’s internal crisis. It still has its arsenal of 130,000-150,000 rockets and missiles aimed at Israel, ready to fire when the order is given.

Lebanon is falling deeper and deeper into an economic and social black hole, and while Hezbollah is not immune to that crisis, it is still able to play with fire and attack Israel.

But the country that it claims to defend is disintegrating, with months of severe fuel shortages prompting long lines at gas stations, families struggling to put food on the table, the country’s water system on the verge of collapse and essential medications running out.

Beirut, once dubbed “the Paris of the Middle East,” is plunged into darkness for hours as generators run out of power.
Though Lebanon has been without a government for over a year, the country’s ruling political elite escapes from all forms of accountability – be it for last year’s deadly Beirut Port blast or the situation of the country.

And with that chaos, Hezbollah has stepped in to fill the void.

The Iranian-backed group has immense political and military strength and is the de facto ruler of south Lebanon. But the group is also seen as one of the causes of the country’s devastating situation, and residents in south Lebanon are no longer silent about their anger toward Hezbollah.

As the cell that fired at Israel drove through the Druze village of Shwaya, Hasbaya district, residents were seen on camera stopping the truck and violently forcing the occupants into a car. One of them, later identified by the IDF as Ali Kajak, is heard saying that he does not belong to the Lebanese Shi’ite terrorist group.

“We call upon the Lebanese army, which is responsible with the international forces for the security of the south, to take control of the entire lands of the south… to prevent the launching of missiles from Lebanese territory, not for the sake of Israel’s safety, but, rather, for the safety of Lebanon,” he was quoted as saying by Lebanon’s National News Agency.

But the Lebanese Armed Forces is feeling the pressure from the economic collapse, and has even reduced its patrols in the south of the country in order to ration fuel. Though LAF has been seen by the IDF as a restraining force along the border, it is not immune to Hezbollah’s pressure.

Senior IDF officers have told The Jerusalem Post that while they don’t consider the LAF their enemy, there are certain elements that definitely collaborate with Hezbollah.

One clear example was the release of all four Hezbollah terrorists who had fired on Israel – including Kajak – along with the mobile rocket launcher and the truck they used. A Lebanese army official was quoted by L’Orient Today as saying that they had been released on the order of a judge.

The courts didn’t even wait a week.

Nasrallah said that the group acts to protect Lebanon, and that’s why it carried out the attack against Israel last week.
The other five rounds of rocket fire led to Israel retaliating by firing artillery shells toward the launch sites. Even when the IDF fired over 100 artillery shells after “unnamed Palestinian groups” fired three rockets toward the town of Kiryat Shmona, the group was able to sit back and take it.

But, when the Israel Air Force struck a road that had been used by the Palestinian groups, that was too much for Hezbollah.

“What happened days ago was very dangerous and a development that did not happen for 15 years,” Nasrallah said, referring to the airstrikes.

“It was necessary for the response to the Israeli airstrike to be quick, or else it would have lost its value,” he continued, adding that the rocket barrage “was aimed at consolidating the equation of deterrence.”

But that “equation of deterrence,” as seen by the IDF or Hezbollah, is more than fragile. And that’s why the IDF did not retaliate, at least not overtly, for the massive rocket salvo.

But with the international community focused right now on Iran and the deadly attack against the Mercer Street that happened a week before the rocket fire, Israel understood that it had limited space to safely maneuver.

Iran remains Israel’s main focus, and it wants the international community to understand the threat Iran poses to the entire world as it continues to accelerate its nuclear program.

But it’s not only that. As Lebanon continues to crumble, Israel is finding itself in a much more volatile theater, where an escalation with one front – be it Hamas in the Gaza Strip or Syria or even the West Bank – will likely cause a flare-up on other fronts.

During a tour of the IDF’s Northern Command on Wednesday, Gantz warned that while Israel is willing to provide aid to its northern neighbor, with which it is still officially at war, it would not accept continued attacks along the border.
“The crisis in Lebanon is devastating. The State of Israel calls on the international community to aid Lebanon. We are also willing to provide assistance. However, we will not let the tragedy in Lebanon cross the border into Israel,” he said, adding: “We are well aware of Hezbollah’s attempts to exploit the situation at the expense of the safety and livelihoods of Lebanese citizens – under the direct influence of Iran.”

Both Israel and Hezbollah have publicly declared that they do not seek an escalation. Nevertheless, it takes only one rocket or one airstrike to destroy the 15 years of relative quiet along the border and send the region into a deadly war.

His November 25 article in The Atlantic “It Wasn’t a Hoax”, is one of several …