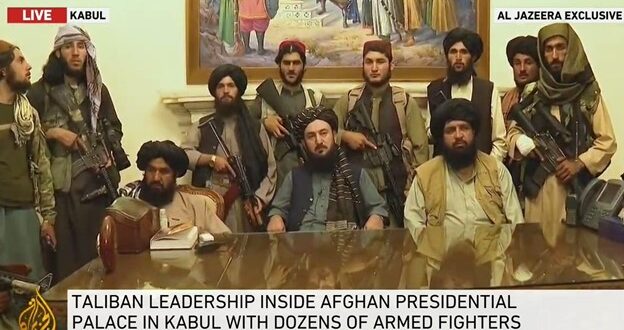 The Taliban Are The Future

The Taliban’s victory is a triumph for them and Al-Qaeda’s biggest victory in a generation. It was their upstart rivals, the Islamic State, which astounded the world in 2014 with their proto-state in Syria and Iraq (with outposts elsewhere) and their Caliphate. In 2019, ISIS lost both its state at Baghouz and, later that year, its Caliph elsewhere in Syria.

Al-Qaeda, which had for so long seemed to be on the sidelines as ISIS hogged all the glory of media attention will have a new lease on life, and Afghanistan could become a safe haven and laboratory for jihadi toilers worldwide – much like ISIS-land or Saudi Arabia or Pakistan have been for some Salafis in the past and Turkey is today for various breeds of foreign Islamists. The Taliban model seems much more successful and appealing to extremists, and a more likely wave of the future for them than the once terrifying, but now outlandish, ISIS model.

Afghanistan becoming some sort of jihadi Wild West, that America can and will have to occasionally strike, is the easier more comfortable scenario. A more concerning one may be a state that is better run, where jihadis are less blatantly obvious and overt in their actions; a place where all sorts of informal connections and symbiotic relationships can be formed in low-key, informal ways, where a new Islamist illiberal version of a nation state can inspire new generations of foreigners – political pilgrims looking for the next big exotic thing.

Almost 20 years since September 11, 2001, some scholars have speculated on how much the Taliban may have changed since they were last in power. The consensus is that they have changed – in terms of ideology and governance – very little and I think that is true. But they have changed somewhat in terms of their exposure to the world. They may not be worldly, but they are more seasoned and confident in the ways of the outside world. They use social media (of course, so do all jihadi and Islamist groups); they negotiated with the Americans. They certainly showed excellent diplomatic and intelligence skills in turning and suborning large sections of the former Ashraf Ghani regime, as generals and provincial governors negotiated their surrender or switched sides. We can say that the Taliban have evolved to a certain extent tactically but remained the same strategically, a little more polish but the same brutality. A more sophisticated and capable Taliban that is still implacably hostile to the West would be a qualitative leap forward.

But if the Taliban may have changed a little, 20 years later we in the West have changed a lot and not for the best. While the Taliban way of war and way of ideology have stayed more or less the same, it is precisely in those two areas that the West, particularly the U.S., has deteriorated.

As far as a way of war, it clear that the expensive, tech heavy American way of war seen in Afghanistan and Iraq, while still formidable, has its limitations. Relying on contractors and local staff, outsourcing vital support functions, the interagency decision-making process, the intelligence community process, building up local proxies – all of these have a certain logic but have had a rough two decades.

And while the U.S. military is showing some flaws, it is still a supremely powerful force that can do some things that few others can. The Western way of ideology, however, is under extreme pressure. It is not clear that we know who we are, what we stand for, and what we want to do.

To be blunt, the liberal democratic model as vehemently preached by the West for years – often in triumphant tones after the fall of the Soviet Union – is showing very real fissures under repeated ideological assault internally. Our adversaries among the Taliban have convictions. One can see it in the Al-Jazeera footage of Taliban fighters overcome by emotion as the Quranic Sura “An-Nasr” (The Divine Support) was recited on August 15 as they occupied the presidential palace in Kabul.

Our other adversaries in Communist China are also firm in their beliefs and in their vision of the future. Our convictions at times seem to be passionate, while becoming increasingly fractured along tribalist, racialist and gender lines. We prate about American democracy and greatness, while we are in hock to China and seem incapable of doing anything about it. Patriotism and national pride seem to have become dirty words, while the history of the West and its heritage seem to have precious few defenders. Our past is being deconstructed brick by brick. And as for democracy, it can mean, as often as not, an alliance of Big Tech with a predatory ruling class that more and more resembles a hereditary oligarchy.

Much can still go wrong among the Taliban. They are less united than they seem to be, and Afghanistan, no matter who rules it, is notoriously fractious. They face a small but bloody insurgency from their rivals at the Islamic State-Khorasan Province (ISKP) faction. The Taliban should be able to win out relatively easily, but it is still a challenge.

But they are likely to be far less isolated than they were in 1996-2001, when they were recognized by just three countries. If they play their cards right, they will likely have productive relations with China, Turkey, Iran, Qatar, and Azerbaijan, in addition to their patron Pakistan. Russia and the Central Asian states are wary but also likely to look for a modus vivendi with Taliban-ruled Kabul. There is, at least not yet, no viable Northern Alliance-type rebel opposition to the Taliban for foreign powers to support. Recreating one is not out of the question, but the Taliban have learned from the past and focused their most recent campaign in prioritizing those areas in the country’s north, where such an opposition could logically emerge. And while some in the West may want to punish Taliban-ruled Afghanistan, the more that it is punished, the greater the stream of Afghan migrants and refugees there will be heading west to Europe, joining other streams of millions of desperate souls emerging from the Middle East and Africa.

The Afghanistan debacle should serve as an alarm bell for Western countries such as the U.S. warning that the old ways of liberal foreign interventionism seem perilously frayed, and the old nostrums and rhetoric shopworn and exhausted. It is likely that the U.S. will never again spend two trillion dollars in foreign misadventures as it did in Iraq and Afghanistan (even if a considerable amount of that money went to American companies and contractors rather than to nation-building in Mesopotamia and the Hindu Kush). But while foreign enthusiasms seem less likely, it is still horrifying to contemplate that the next counter-extremist crusade being generated seems to aim at the American heartland. It is almost as if we have learned nothing from two decades of conflict.

Post Views: 105
Previous The Taliban Victory – Made In USA
Next Turkey welcomes Taliban statements since their takeover in Afghanistan