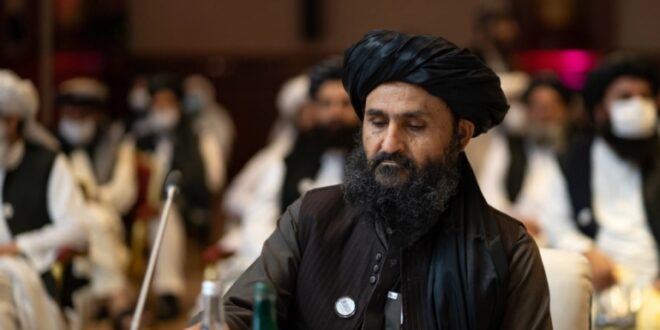 Who are the Taliban’s key leaders in Afghanistan?

Six important figures lead the Taliban movement, which has been fighting the Western-backed government since 2001.

The Taliban has been fighting the Western-backed Afghan government in Kabul since it was removed from power in 2001.

It originally drew members from so-called “mujahideen” fighters who, with support from the United States, repelled Soviet forces in the 1980s.

The group emerged in 1994 as one of the factions fighting a civil war and went on to control most of the country by 1996, when it imposed its interpretation of Islamic law.

Opponents and Western countries accused it of brutally enforcing its version of Islamic law and suppressing religious minorities.

The Taliban is once again ascending militarily in Afghanistan since foreign troops began to withdraw, seizing most of the country’s territory to control the capitals of 10 of 34 provinces

Its founder and original leader was Mullah Mohammad Omar, who went into hiding after the Taliban was toppled by US-backed local forces following the September 11, 2001, attacks on the US.

So secretive were Omar’s whereabouts that his death, in 2013, was only confirmed two years later by his son.

These are some of the key figures in the movement:

Known as the “Leader of the Faithful”, the Islamic legal scholar is the Taliban’s supreme leader who holds final authority over the group’s political, religious and military affairs.

Akhunzada took over when his predecessor, Akhtar Mansour, was killed in a US drone attack near the Afghan-Pakistan border in 2016.

For 15 years, until his sudden disappearance in May 2016, Akhunzada taught and preached at a mosque in Kuchlak, a town in southwestern Pakistan, associates and students have told Reuters news agency.

He is believed to be aged about 60 and his whereabouts are unknown.

The son of Taliban founder Mullah Omar, Yaqoob oversees the group’s military operations and local media reports have said he is inside Afghanistan.

He was proposed as the overall leader of the movement during various succession tussles.

But he put forward Akhunzada in 2016 because he felt he lacked battlefield experience and was too young, according to a Taliban commander at the meeting where Mansour’s successor was chosen.

Yaqoob is believed to be in his early 30s.

The son of prominent mujahideen commander Jalaluddin Haqqani, Sirajuddin leads the Haqqani Network, a loosely organised group that oversees the Taliban’s financial and military assets across the Pakistan-Afghanistan border.

The Haqqanis are believed by some experts to have introduced suicide bombing to Afghanistan and have been blamed for several high-profile attacks in Afghanistan, including a raid on Kabul’s top hotel, an assassination attempt on then-President Hamid Karzai and a suicide attack on the Indian embassy.

Haqqani is believed to be in his late 40s or early 50s. His whereabouts are unknown.

One of the co-founders of the Taliban, Baradar now heads the political office of the Taliban and is part of the group’s negotiating team in Doha to try and thrash out a political deal that could pave the way for a ceasefire and more lasting peace in Afghanistan.

The process has failed to make significant headway in recent months.

Baradar, reported to have been one of Mullah Omar’s most trusted commanders, was captured in 2010 by security forces in the southern Pakistani city of Karachi and released in 2018.

A former deputy minister in the Taliban’s government before its removal, Stanikzai has lived in Doha for nearly a decade and became the head of the group’s political office there in 2015.

He has taken part in negotiations with the Afghan government and has represented the Taliban on diplomatic trips to several countries.

He is head of the Taliban’s negotiating team. The Taliban’s former shadow chief justice heads its powerful council of religious scholars and is widely believed to be the person Akhunzada trusts most.

Post Views: 110
Previous Kabul near standstill on day one of the Taliban’s ‘Emirate’
Next Why did the Afghan army disintegrate so quickly?