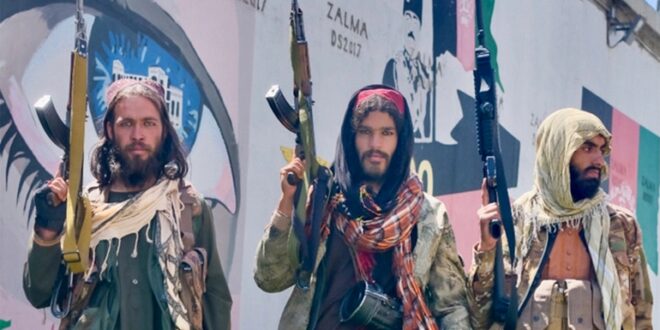 Kabul near standstill on day one of the Taliban’s ‘Emirate’

The bustling metropolis of six million saw businesses shut as people stayed indoors after the Taliban took over.

The first day of what the Taliban calls the “Islamic Emirate of Afghanistan” saw Kabul, a bustling metropolis of six million, turn into a slow, male-dominated city without police or traffic controls and with shuttered businesses everywhere.

A city that only 48 hours ago was jam-packed with cars and hundreds of people lining up outside banks, visa processing offices and travel agencies, had come to a near standstill.

Remnants of the Western-backed Islamic Republic of Afghanistan, built over 20 years of international support, linger. The dividers and K9 cages of police checkpoints were still standing, but unmanned.

The giant explosives scanners still stand, but with no one to operate them. Streets leading to the airport road were jammed with no traffic police to direct them.

The most glaring difference is the city’s new inhabitants: Taliban fighters who had come from all over the nation’s 34 provinces. They could be seen proudly waving their black-on-white flag and displaying their guns from the very four-wheel drives that used to be sent across the country to hunt them down.

They could even be seen outside the well-guarded presidential palace where, until Sunday afternoon, former President Ashraf Ghani would have sat contemplating the group’s rampage through Afghanistan’s provinces.

By all accounts, the mostly young men had the hallmarks of the same Taliban of 1996, traditional clothes, beards, kohl-rimmed eyes and guns at their side.
Taliban fighters with smartphones

But there was one glaring difference between these men and their predecessors, each held a smartphone and was busy taking selfies with murals of the nation’s one-hundredth independence celebration behind them.

“We are here to serve the people,” said Ahmad, who had come from the eastern province of Maidan Wardak and gave only one name. Ahmad and his half a dozen friends were more than happy to pose for pictures and take selfies with eager passersby.

One even specifically took out his gun and held it out in front of a young man’s Galaxy phone.

“Of course, you can take a picture. Take as many as you want,” the group of Taliban fighters told Al Jazeera.

During their five years or so of rule, the Taliban had banned photography and provided the public with no access to the still-fledgeling Internet.

Ahmad said he arrived with a convoy from Arghandai, about 40 minutes from the city, at about 3am on Monday. He and his men were sent as part of the Taliban’s effort to control any possible looting and other crimes after police and other security forces seemingly absconded.

“It was madness. No one was on the street, no police, nothing,” he said of the early morning hours in Kabul.

He claims that when they arrived at a police station, they found bags of heroin they accuse the police of dealing in. Though the claim could not be independently verified, residents of cities like Kabul have long accused the police of involvement in or complacency towards the nation’s drug trade.

Though no official state has been announced, Ahmad says the Islamic Emirate is already the government.

No one should fear the Taliban, the fighter said, even those who have worked with the government or foreign forces.

“We have come with an amnesty, everyone can go about their lives,” he said as a painting of Amanullah Khan, the king who declared the nation’s independence, looked down on him.
Amenable to the crowds

There have not been any verified reports of Taliban searches or seizures in Kabul. However, residents speaking to Al Jazeera from Kandahar and Herat last week said they had seen Taliban fighters entering the homes of people suspected of being involved with the former Kabul administration or international forces.

Ahmad said: “The only thing we will do is to ask anyone who has a weapon to turn them over to the government,” something that may not sit well with many Afghans, especially those who had joined uprisings to fight the group’s advance over the last several months.

Elsewhere, the Taliban seemed to be just as amenable to the crowds gathering around them.

Outside the national broadcaster, RTA, Taliban cited “security concerns” for not allowing photography, but were talking about Twitter which, in recent years, has become a favourite communication method for the group and its supporters.

“Look, just keep checking the tweets,” one Taliban member could be heard telling another.

On Sunday there were social media images of beauty salons painting over the images of women on their windows, something that would have not been allowed in the first place during the Taliban’s rule between 1996-2001, but the group itself did not seem to make an effort to hide any images that may run counter to their conservative beliefs.

Gyms still had pictures of muscular shirtless men, a hospital’s poster of an Indian female doctor was untouched. Likewise, images of Abdul Razeq, the Kandahar police chief deeply hated by the Taliban, were not taken down, nor were banners and flags commemorating Ashura – a Muslim holiday with special significance to the Shia sect.

As the day wore on more people started to come out on the city’s streets, including women, and restaurants and shops started to open back up. Streets started to get full, women could be seen coming out dressed normally.

Many believe that the task of running a government, especially one they inherited overnight, will prove to be an uphill battle for the Taliban.

Ehsan Habib, who has lived in the Persian Gulf, Europe and Iran, says a sense of calm alone will not ease his mind.

He came to a gate in the Wazir Akbar Khan neighbourhood hoping to speak to the Canadian embassy, but the Taliban fighter manning it told him the embassy was closed.

“I came back a year ago thinking my nation was fixed, I wished I had just stayed,” he said while more people came to speak to the fighter.

Most of his family is in Iran, and the new Taliban rule does not give him much confidence.

Juma Gol, a taxi driver who had transported several people to the over-crowded airport since early Monday morning, laments the fact that when a new administration comes to Afghanistan, all traces of the previous one immediately fade into the sands of history.

“What is the point of not showing up, why can’t people just do their jobs,” he says about the lack of police on the streets, blaming the shuttered businesses for adding to the overall slowness in the city.

“Life has to go on, no one came out and said to close your businesses.”