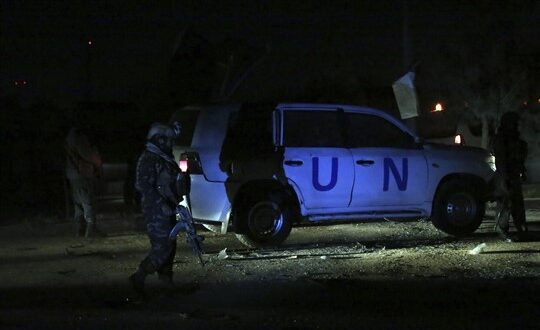 The images of humanitarian chaos and the deteriorating situation for women after the swift Taliban takeover of Kabul have left the international community grasping for options. In the face of Afghan women’s desperate pleas for support, women’s rights NGOs in the United States recently called for a United Nations peacekeeping operation in Afghanistan. There is no question that such an operation, if mounted earlier, would have been beneficial to Afghan civilians and particularly to women. As David Cortright and I have written before, and as much scholarly research shows, U.N. peacekeeping operations work better than Western counterinsurgencies at maintaining durable peace, protecting civilians and building human rights culture.*

According to some experts, peacekeeping efforts could have done far more to support an inter-Afghan settlement than a continued U.S. presence. Roya Rahmani, the former Afghan ambassador to the United States, also expressed regret on CNN this week that “Unfortunately, the international community did not broker and enforce a settlement leading to the establishment of a new inclusive government in time, which could have been held together with the help of a peace-keeping mission.”

The ideal moment for a peacekeeping operation was arguably long ago, as an early alternative to an extended U.S. occupation, or even earlier this year, as a mechanism for extracting the U.S. from Afghanistan without leaving behind a power vacuum. Even one or two weeks ago, a Bosnia-style U.N. Security Council-authorized Chapter VII intervention to stem the Taliban siege against urban areas and bring both parties to the peace table might have laid a foundation for a peacekeeping force.

Now, with the Taliban now having secured an apparent victory, observers might reasonably ask whether such a strategy would any longer be viable or appropriate. Most U.N. peacekeeping missions are inserted into intractable civil wars as a mechanism to create and maintain cease-fires between stalemated parties. They require the consent of both warring parties, something that can work when there is a stalemate or peace deal, but which is harder when victors holding a newly captured state have little incentive to cede power or authority to outsiders. With the Taliban now firmly in control, can peacekeeping even be considered, much less take root and be effective?

The answer is yes. Despite the evolving strategic context, there are three reasons to think the right conditions for a U.N. peacekeeping mission could in fact yet be emerging. First, it is not at all clear whether the Taliban have defeated the Afghan military, or whether in fact the sitting Afghan government and military have simply retreated to regroup. The Afghan military made efforts to remove its most valued assets—pilots and fighter craft for example—to neighboring countries. Senior former leaders of the government have mobilized a political opposition from exile. Former Vice President Amrullah Saleh has declared himself Afghanistan’s “caretaker president” in the wake of President Ashraf Ghani’s flight from the country and is mobilizing a base of resistance in the Panjshir Valley.

Without the stabilizing effect of the U.S. presence, a renewed civil war is a real possibility. When they last held power, the Taliban were opposed by a conglomeration of ethnic groups opposing their rule, known in the U.S. as the Northern Alliance. Saleh’s group is modeling itself on this earlier movement, though it is likely only the first of multiple opposition groups that will emerge. And the Taliban itself is not homogenous or monolithic. Already there are rifts and differences across provincial capitals, and between the rank-and-file Taliban and their international leadership

Renewed insurgency or civil war presents a different kind of threat to civilians than the repressive rule they already fear under Taliban authority and on which many international actors are now focused. But an ongoing conflict, as opposed to a settled Taliban victory, also presents an opportunity to the international community to do what organizations like Mercy Corps are advocating for: focus on diplomacy. This can include helping broker an inclusive peace, leveraging the Taliban’s desire for recognition to insist they follow international humanitarian law, and inserting a more robust and effective peace mission in the wake of the U.S. withdrawal

The potential of a cohesive anti-Taliban insurgency is already being leveraged by senior leaders of the former Afghan government to restart peace talks with the Taliban over the shape of an interim government. Former President Hamid Karzai, Head of the High Council for National Reconciliation Abdullah Abdullah and former Prime Minister Gulbuddin Hekmatyar have regrouped in Qatar in the form of a so-called Coordination Council aiming to create an inclusive coalition government. The Taliban met with them Tuesday to begin talks that may or may not lead to such a settlement, depending on developments in Afghanistan.

It is this effort at creating an interim government, coupled with the threat of a renewed insurgency, that provides an opening for the U.N. to reposition itself to provide security guarantees. Already, calls are rightly emerging for emergency action to expand the existing U.N. political mission in Afghanistan, UNAMA, to do even more, such as protect humanitarian corridors. But it is unlikely a tiny, civilian mission can do so safely without the protection of security forces: Currently, UNAMA has begun evacuating staff to Almaty, Kazakhstan, for their own safety. A future or beefed-up near-term U.N. presence will require a more robust force able to defend not only itself, but humanitarian workers and civilians if needed.

Even a small U.N. peacekeeping mission could serve as a neutral third party to tamp down potential violence between armed groups and among civilians, protect humanitarian corridors, and support and enforce any peace agreement. Such operations succeed more than they fail, and recent research from Mali shows that even in cases where the odds are against success, peacekeepers can play a pacifying role at the grassroots level and assist in staving off intercommunal conflict. Such a force could also be the last international bulwark against a slide into the kind of Taliban rule on display prior to 2001, by monitoring an intra-Afghan peace and maintaining a presence to monitor the protection of basic human rights.

But the United Nations would need to prepare to reengage with whatever peace process emerges in the next weeks and months, to make this happen. This is less an argument of what it should do this week, as to what it should be prepared to do as the situation unfolds. Such missions don’t spring up overnight, so even if a full peacekeeping operation is politically unviable now, a contingency plan for such an operation makes sense. The fast-moving nature of the situation in Afghanistan means that a failure of political imagination now might mean an opportunity lost in a few weeks when the moment is right.

The Security Council can look toward playing two crucial roles here in its mandate to protect international peace and security. First, the council can establish a mechanism for brokering peace talks and/or ensure room for itself at the table in a settlement. A U.N.-brokered peace agreement would be far preferable to one brokered by the U.S. or a regional stakeholder. If it chose to play a more proactive role, India could use its position as rotating Security Council president to call an emergency meeting and press for neutral arbiters from outside the region to help broker an intra-Afghan settlement.

Second, for the sake of international peace and security, the Security Council should begin immediately assessing the logistical ingredients needed for a peacekeeping mission to oversee such a settlement. The U.N. secretary-general could immediately undertake a strategic assessment to identify all possible options for U.N. engagement and provide recommendations to the council. While current U.N. Secretary-General Antonio Guterres has been described by International Crisis Group’s Richard Gowan as a “peacekeeping skeptic,” this crisis represents an opportunity for the United Nations to reassert a leadership role if it chooses.

One argument against spending effort in this direction is that the Taliban might not agree to peacekeeping forces. It’s true that both the Taliban and whatever opposition coalesces would need to accept a U.N. role in a peace settlement to make it happen. But the international community has much more leverage here than it may think. Among other things, the Taliban, like many similar groups, desires international recognition and standing. Research shows such groups are susceptible to international normative pressure and influence. The international community could condition that diplomatic recognition, and future aid, on a U.N. role in brokering a deal and the deployment of a moderately sized mission to monitor, verify and enforce it. That mission could help keep the peace and ensure the flow of humanitarian aid, thereby protecting civilians and stemming refugee flows. To be sure, this proposal would need to be offered at the right moment and be calibrated with the evolving situation. But to be in a position to do so, the U.S. and U.N. must start thinking ahead—and thinking of peacekeeping as a real option rather than a radical idea.

U.S. leadership is also key, given the United States’ role on the Security Council and the perception that the U.S. owns this problem. But supporting a peacekeeping operation presents the U.S. with an opportunity to save face. Popular support in the U.S. for the military withdrawal from Afghanistan is declining and outrage over its humanitarian consequences increasing. Exercising U.S. leadership in support of a U.N. mission could help President Joe Biden reduce the political fallout of what is being framed as a haphazard departure and educate the public on the difference between U.S. nation-building and U.N. peace-building, which has a stronger track record. Throwing Washington’s weight and resources behind the effort to replace the U.S. presence with that of a robust, multilateral U.N. mission to stabilize Afghanistan could not only help salvage the situation, but allow the U.S. to get ahead of it, while reframing it to distinguish the Biden administration’s legacy from the mistakes it inherited.

To do this, the State Department should reach out to neutral Muslim-majority countries such as Bangladesh, Jordan, Egypt and Indonesia and offer significant inducements for troop contributions in the event they are called on. The U.S. can also play other key roles, through the Security Council and through its own public rhetoric, to indicate that while it has departed Afghanistan, the international community need not, and that it would support and help bankroll a strong and more effective United Nations role in brokering and sustaining peace there. The U.S. can also condition bilateral aid packages to Pakistan on Islamabad’s willingness to pressure the Taliban to accept international involvement.

The issues to watch for in the coming days, and which should be invoked in calls for action from the president of the Security Council and the U.N. Secretary General’s Office, include the development of an anti-Taliban insurgency and the trajectory of intra-Afghan talks between the Taliban and former Afghan leaders. But the first step is to change the narrative and create room for the possibility of robust action and a firmer leadership role by the United Nations. The international community has many tools it has not yet used, and peacekeeping remains one of them—one that works more often than it fails. The U.N. should not and need not stand by helplessly as Afghanistan falls into tyranny or returns to civil war.

Post Views: 69
Previous America as a Base Nation Revisited
Next The Known Unknowns of Afghanistan’s Future