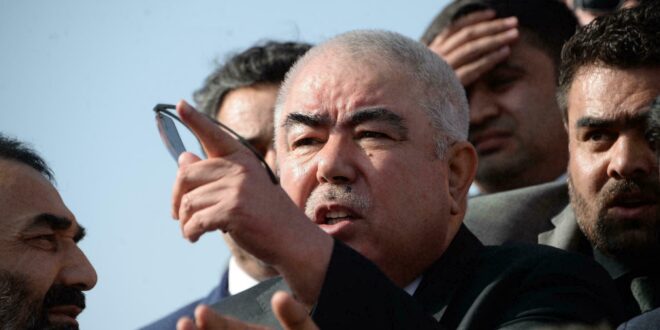 Warlord Dostum back in the fray as Taliban overwhelm Afghan north

The scene was a familiar one as warlord Abdul Rashid Dostum jetted into northern Afghanistan this week — a promise of bloodshed and vengeance, and no apology for his vicious past.

Despite a series of war crimes linked to his forces, the Afghan government is hoping Dostum’s military acumen and seething hatred of the Taliban can help beat back the current insurgent offensive.

At 67, the greying Uzbek militia leader is not quite in the fighting shape of his youth — he has just returned from medical treatment in Turkey — but his desire to be on the frontline does not appear to have dimmed.

Loaded on a commercial jet with a contingent of commandos, Dostum headed north Wednesday to join the battle for Mazar-i-Sharif after his nearby Sheberghan stronghold was captured by the Taliban at the weekend.

Dostum was back in the fight.

The warlord’s prominence in the latest fight with the Taliban lays bare the long-simmering conundrum facing President Ashraf Ghani’s administration, which has struggled with on-again, off-again relationships with Afghanistan’s ubiquitous strongmen.

Ghani has repeatedly tried to distance himself from the country’s infamous warlords but only to bring them back into the fold in the time of need.

Former paratrooper, communist commander, warlord and vice president Dostum has been the very definition of a cunning political survivor forged over four decades of conflict in war-torn Afghanistan.

Hailing from northern Jawzjan province, a young Dostum enlisted in the Soviet-backed Afghan military in the 1970s and rose dramatically through the ranks — only to abandon the government when it collapsed in the early 1990s.

From then a familiar pattern emerged.

Dostum would bend when circumstances demanded, and developed a knack for picking the winning side when it seemed his luck was running out.

During the brutal civil war of the 1990s, he frequently jumped from one ship to the next — looking for the best deal in the fractious battle for Kabul that raged between several militia factions.

Over the years, Dostum has survived several ambushes and assassination attempts by both the Taliban and the Islamic State group.

And after being run out of the country by the Taliban during their rise to power, he returned in dramatic fashion — as a CIA asset, and the tip of the spear of the US-led invasion that toppled his old foes.

He would later stand accused of massacring hundreds, if not thousands, of Taliban prisoners of war in 2001 — including stuffing insurgents into shipping containers where they suffocated.

With the Taliban gone and a new power centre developing in Kabul, he again rose through the ranks of the defence forces before eventually becoming vice president in Ghani’s administration.

But his violent disposition never seemed to wane.

As the country’s vice president, Dostum was accused of torturing and raping a political rival, eventually leading to another temporary exile.

But he engineered another return and by 2020 was officially awarded the rank of “marshal” in the Afghan military.

With the Taliban again rampaging across the country, Dostum is back on the frontline along with a host of former militia leaders from the 1990s that were erstwhile allies and enemies.

“The Taliban never learn from the past,” Dostum told reporters after landing in Mazar, vowing to kill the jihadists.

“The Taliban have come to the north several times but they were always trapped. It is not easy for them to get out.”