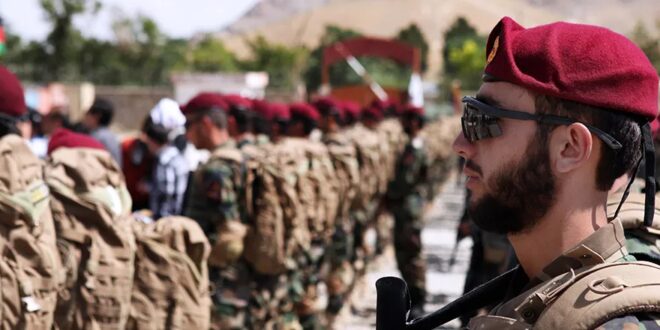 Why Did the Afghan Army Evaporate?

There are several reasons for the collapse of the Afghan army, but a duplicitous US negotiation with the Taliban was the most potent, and the insurgents exploited the uncertainty brilliantly.

President Joe Biden’s claim that the Afghan army ‘did not have the resolve’ to fight for its own country would seem to be true following its disintegration. But it is as much a misrepresentation of the truth as US and UK ministerial claims in recent days that the collapse came as a complete surprise.

By early June it was already clear that the Afghan army had been ineptly deployed in the wrong places. I wrote for a Washington website, widely read within the Beltway: ‘The Afghan army is spread across the country in piecemeal district centres (often surrounded by Taliban-controlled countryside) and have to be resupplied by air. This is not a sustainable model.’

It also became apparent that the Taliban had embarked on a covert programme to undermine Afghan army morale: ‘Afghan security forces have begun to surrender to the Taliban. The procedure is quick and simple. Tribal elders are used to deliver a stark message to Afghan troops often holding positions in district centres. The message is usually; “The non-believers are leaving Afghanistan. They are defeated. Your leaders are corrupt. You can surrender now and we will protect you; or you can fight and we will kill you.” Recently the Taliban appear to have honoured their promise not to punish Afghan soldiers who surrender. News of this new-found leniency is likely to encourage other units to follow suit and lay down their arms.’

I added: ‘Furthermore, a number of today’s Afghan leaders, officials and military officers have received offers to relocate to the United States, Germany and elsewhere. As the security situation continues to deteriorate, the gradual trickle of departures is likely to gather pace. In such circumstances, the government could implode quite suddenly.’

This should have rung warning bells inside the Pentagon and the UK’s Ministry of Defence. In June 2014 Islamic State insurgents attacked the Iraqi army in Mosul. After only four days of fighting, the 30,000 Iraqi troops of the 2nd Division fled in disarray. It took three years and cost tens of thousands of lives and billions of US dollars to retake Mosul after this catastrophic failure. There have been studies as to why this happened and doubtless the case has been debated at staff colleges worldwide. But have the lessons been learned?

Before we analyse the particular reasons for the Afghan army’s disintegration, we should acknowledge that this phenomenon happens to First World armies too. A classic case was when a British army (including Indian and Australian troops) collapsed after the Japanese invaded Malaya, leading to the humiliating surrender of Singapore in February 1942. One aspect of that defeat which chimes with Afghanistan was the disconcerting speed of the Japanese advance (in their case using bicycles rather than the Taliban’s 125cc motorbikes) and the unease caused to regular troops when an enemy comes between them and their rear supply base.

A paradox is that Afghans are famed for their fighting prowess. However, as Antonio Giustozzi has argued, ‘The real strength of Afghanistan is the armed population not the regular forces’. Indeed, Afghanistan’s traditional expertise has always been asymmetric warfare. Afghan Special Forces, such as Units 333 and 444 – both created and trained by the British since 2001 – have been superb and have built on the Afghans’ natural propensity for irregular warfare. By contrast, the Afghan National Army has a mixed record, as the Soviets also found out. Giustozzi comments that ‘corruption, desertion, drug-taking, ethnic tensions, poor administration, nepotism, occasional collusion with the enemy, and impunity were all factors which the Soviets and NATO both encountered’.

Both the Soviets and NATO built Afghan armies that were far too large. The Soviets tried for 220,000 and NATO for 195,000. In so doing, the quality of the soldiery was inevitably reduced. It would have been better to create a much smaller, more sustainable army and to invest the most training into the Afghan National Police (ANP). The ANP have an appalling reputation for corruption and abuse and are widely distrusted by the populace.

This brings us to the question of morale in the Afghan army. It has taken fearful losses and has fought very bravely since NATO withdrew from its combat role at the end of 2014, in spite of a reduction in close air support and casualty evacuation. President Biden’s announcement of a complete withdrawal by 11 September would have ended all such support, but also called into question the resilience of the supply chain to units based in far-flung locations. Afghan transport aircraft were dependent on Western maintenance contractors, who were likely to be withdrawn.

But the key element that undermined Afghan army morale was the US beginning negotiations with the Taliban behind the back of the elected Afghan government. This clear act of bad faith was not lost on the soldiery, who realised the likelihood of a future Taliban takeover. Donald Trump tweeted on 8 October 2020: ‘We should have the small remaining number of our BRAVE Men and Women serving in Afghanistan home by Christmas!’ Once Trump’s intention (if not the date) had been confirmed by Joe Biden on 13 April 2021, the die was cast. Every Afghan soldier would have been calculating his own safety and that of his family in the likely event of a Taliban takeover.

Finally, this takes us to the question of whether the West ever understood what ordinary rural Afghans (and therefore soldiers) really thought. Western diplomats, journalists, politicians and aid workers were well acquainted with the views of educated Afghans in Kabul and, to a lesser extent, those in regional capitals where Provincial Reconstruction Teams operated. But rural Afghans saw fewer benefits from the increased Westernisation of the country. Many have conservative views, even on issues such as female education. They were less inclined than urban elites to overlook the rampant corruption of the Afghan political class and the entitlement of the warlords such as Rashid Dostum. The soldiery in regular Afghan kandaks (battalions) doubtless swapped many such views when on leave in their home villages. Yes, the job was well-paid, but it was not worth endangering the future safety of their families.

Post Views: 64
Previous Protests Challenge Taliban’s Governance
Next The Next Act in the Afghan Tragedy