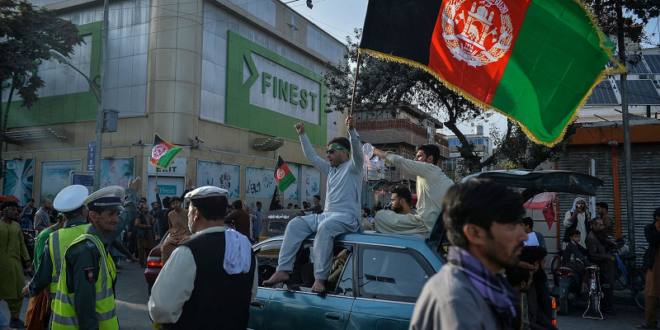 Protests against Taliban rule in Afghanistan spread to several cities ahead of the first Friday prayers since the militant group took control last Sunday. In Kabul, around 200 people gathered at one protest on Thursday, the country’s independence day, before Taliban fighters dispersed them violently. Several people were killed in Asadabad after the Taliban fired on a crowd waving Afghan flags, and the group announced a curfew in Khost after demonstrations there.

The small but defiant protests signal the challenges the Taliban may face in governing the country, even as tens of thousands of Afghans have sought to flee, fearing a return to the draconian rule of the late 1990s. The militants have called for unity—and urged imams to do so on Friday—amid the scramble for the exits. But the Taliban may have trouble tamping down on dissent, particularly in the case of a humanitarian crisis. (The United Nations has already warned of food shortages.)

Two Talibans. The Taliban could also face a challenge from within. The gap between the group’s top leadership, who have spent years abroad, and the fighters now charged with keeping order in Kabul and beyond is vast, as FP’s Anchal Vohra writes. The Taliban leadership has engaged in a public relations exercise in a quest for internal and external legitimacy, but tensions over this approach and any concessions to the West remain unresolved, from allowing certain social freedoms to holding elections.

Will the Taliban keep their word? In an interview with ABC on Thursday, U.S. President Joe Biden said the Taliban must decide quickly whether they want international recognition. But the question of whether the Taliban can be trusted to keep its promises depends on who it’s made the promises to, Anatol Lieven argues in Foreign Policy. Taliban pledges not to sponsor international jihadism have been “unequivocal,” he writes—and they have repeated this promise to all of their neighbors.

“It is a very different matter, however, when it comes to Afghan promises concerning the rights of Afghan citizens,” Lieven writes. While the Taliban have projected a more moderate stance to the outside world, intelligence reports indicate that they have already begun rounding up Afghans on a blacklist that includes people who have worked with the previous administration or with U.S.-led forces. Afghan journalists have expressed doubt about a Taliban pledge to allow a free press after attacks and raids.

Ultimately, much remains unknown about how the Taliban will govern Afghanistan as a whole, and Kabul in particular. Their response to early protests and dissent could offer a clue.

Post Views: 72
Previous Russian Airstrikes on Opposition Sites Around Idleb
Next Why Did the Afghan Army Evaporate?