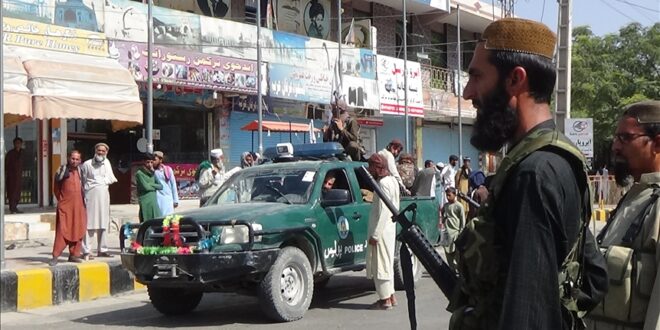 With the dramatic sweep of the Taliban across Afghanistan in the face of crumbling resistance from the Ashraf Ghani regime, the wheel of history has turned full circle.

In the end, the 180,000 Afghan National Defense and Security Forces, and a police force with 150,000 personnel, besides an air force and other security wings armed with technology and trained by the US and NATO, proved unequal to a motley force of Taliban.

Blaming poor leadership and lack of logistical sustainability, Ali Ahmad Jalali, a former interior minister said the absence of operational and tactical coordination belied the much-hyped claims of the tenacity of the Afghan forces as they fast crumbled in the face of advancing fighters.

The Taliban’s capture of Kabul may put an end to the conflict that began after the Saur Revolution, a 1978 coup wherein Afghanistan’s communist party took power and then paved the way for the Soviet occupation in 1979. After humbling the Soviets in 1989, it was now the turn of the world’s number one superpower, the US, to experience the pangs.

For the first time in 43 years, with foreign troops gone and the fall of a “foreign-backed” government in Kabul, there is no reason or incentive for anyone to continue fighting.

But, if the international community resorts to isolate a Taliban-led government rather than engage it, the country will continue to simmer. There are such calls from different quarters to deny the Taliban legitimacy.

Scott Worden, director of Afghanistan and Central Asia Programs at the US Institute of Peace called on the international community to deny the Taliban travel privileges from Doha and asked Washington and its allies not to recognize them as a legitimate government.

Way back on April 17, 1998, US envoy to the UN Bill Richardson had successfully convinced the Taliban to allow higher education for women – without co-education – and to permit health workers and doctors to treat women. By his engagement, he had also elicited an assurance to prohibit opium cultivation in Afghanistan.

According to Roy Gutman’s book, ‘How We Missed the Story: Osama bin Laden, the Taliban, and the Hijacking of Afghanistan,’ the Taliban had even agreed to a cease-fire and to join talks with the rival United Front or Northern Alliance.

The 2020 Doha agreement has similar clauses, but not before the killing of estimated 157,000 people, which included 43,000 civilians. The conflict consumed more than 2,300 US military personnel, while more than 20,000 were wounded in action. The Pentagon says it has spent nearly $825 billion on military operations in the country. In total, the US spent $2.26 trillion on a dizzying array of expenses, according to the Costs of War project.

Even after spending such huge money, the Americans and the world must realize that engaging the Taliban rather than isolating them will bring peace to the war-ravaged country. The war has also brought into sharp focus the limits of hard power.

Almost 20-years after its invasion, the US will not have a seat at the head table to influence the country’s future.

“The truth is that the voices that will be heeded most are those coming out of Pakistan, Iran, China, and Russia – all players that Washington has limited or no influence with,” says Nilofar Sakhi, a senior fellow at the South Asia Center of the US-based think-tank Atlantic Council.

Juan Cole, a Middle Eastern and South Asian history professor at the University of Michigan, predicted that unlike the Northern Alliance, which defeated the Taliban with US air support in 2001, the Afghan army will not put up the fight in the same way.

In a write-up, he also mentioned that US operations in the hinterland had turned people against it, as had happened in Vietnam.

“Insurgents come from towns and villages and have friends and relatives there. When insurgents hit a US outpost, the US troops had to go into the nearby village and shake it down, looking for the guerrillas. They’d go into Afghan homes at night, with the women folk rustled from their sleep. After a thing like that, the men of the family would have had at least to try to kill some Americans,” he wrote.

Furthermore, the US siding with the corrupt politicians and the warlords made it even more unpopular and swelled ranks and sympathy for the Taliban.

“The new Afghan elite fleeced the people and bought fancy islands around Dubai with the money, even embezzling from the Da Kabul Bank. In 2008 the Da Kabul Bank collapsed, leaving people in long lines before its branches seeking to recover their life savings,” said Cole.

US cedes Afghanistan to China

Moreover, many of the regional warlords under the democratic government were also not easier on women or minorities than the Taliban and were fundamentalists of a different stripe.

John Allen, president of the Brookings Institution said the US has almost ceded the field in Afghanistan to China.

“No one should have missed the explicit message sent by the Chinese in the recent warm and celebratory welcome of Taliban leader Mullah Abdul Ghani Baradar in Beijing. That welcome appeared in stark contrast to the cold and confrontational reception of the American envoy, Deputy Secretary of State Wendy Sherman,” he said.

Allen added that the Taliban regime in Kabul will also create an opportunity for a north/south trade corridor from the Russian sphere of Central Asia, across Afghanistan and the southern curve of Pakistan to Gwadar – the Chinese-built port on the Indian Ocean.

Return of Russia and China’s goals

The return of Moscow to Afghan affairs is also viewed as completing the full circle and repeating history.

Over the years, Moscow has steadily enhanced its influence on the Afghan issue; whether through outreach to the Taliban that began several years ago, engaging in the troika or extended troika format of talks, or even setting up the Moscow format of talks, the former superpower has extended its presence.

Russia was perhaps the first country to believe that engagement with the Taliban was needed to protect its interests and prevent the spillover of Afghanistan into Central Asia. The Russian Foreign Ministry has noted assurances from the Taliban that they “will not violate the borders of the Central Asian counties”.

In addition, it will “ward off the threat of ISIS/Daesh in Afghanistan and eradicate drug production in the country after the end of the civil war.”

In the wake of the Ashraf Gani government’s calls for more air support from the US and even military help from India in light of the rapid Taliban advances, Russia began wargames along Afghanistan’s borders with Uzbekistan and Tajikistan.

There were also joint Russia-China military exercises in northwest China, east of Xinjiang, a region that shares a narrow border with Afghanistan.

While in the new situation, there is a real test for Russia and China in managing the situation, their military maneuvers did send a message to regional powers not to interfere militarily in Afghanistan.

China believes that the Taliban can help it achieve two core goals. First, it wants the Taliban to deny space to the groups inimical to Beijing and to allow infrastructure investments to bring the Belt and Road Initiative to Afghanistan.

Return of the king

The events unfolding in Afghanistan have had a knack of repeating themselves ever since the Anglo-Afghan war. When the British launched a military campaign to take over Kabul in 1839, it was aimed to remove hostile Dost Mohammad and anoint their ally Shah Shuja as the king.

But soon Afghans retaliated and killed most of the British soldiers. According to Scottish historian and writer William Dalrymple, the retreat from Kabul was the worst military catastrophe ever suffered by the British.

The retribution was sent, who completely wiped out the city of Kabul and everything else they came across.

“They raped women. They killed children. It was a hideous example of evil breeding evil, and not surprisingly some of the British officers welcomed back in India as victorious heroes were so sickened by shame that they found it hard to respond appropriately,” writes Dalrymple in his book, Return of a King: The Battle for Afghanistan.

After all that plunder, the British were forced to return to Dost Mohammad, pleading with him to take over reins of Kabul in 1842 as Shah Shuja was murdered. After long negotiations, he returned as the king, but not before the British invasion had left 20,000 of its soldiers and tens of thousands of civilians dead in three years.

With the Taliban’s return to Kabul after being pushed out in 2001, Afghanistan’s history is repeating itself. To give history a rest, the world community needs to engage with the Taliban to enable them to understand statecraft and not run the country like a madrassa or seminary. The new rulers in Kabul need to respect and promote human rights, protect women’s rights, and the lives of people to bring stability to their country, which has been threatening peace in the region since 1978.