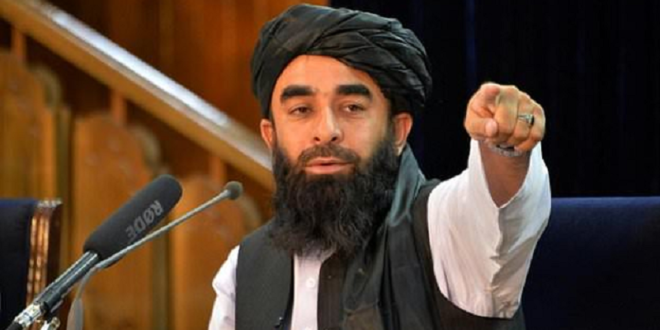 Voice of jihad: Taliban spokesman in spotlight after shadowy fight

For years the Taliban’s top spokesman shunned the public eye, even as he amassed hundreds of thousands of followers online where he live-tweeted the insurgency.

But days after the Taliban captured Kabul following the collapse of the US-backed government, Zabihullah Mujahid presented himself to the public for the first time in a surprise press conference in the Afghan capital.

At first glance, there was little that distinguished the Taliban spokesman from its other leaders — the middle-aged jihadist sported a black turban and full black beard framing a stoney demeanour carved from decades of war.

“We have expelled the foreigners,” he proclaimed in his opening remarks.

Just days earlier, Mujahid announced via social media the assassination of leading government spokesman Dawa Khan Menapal, boasting that the killing had been orchestrated “in a special attack” carried out by the Taliban.

The spokesman is now sitting in Menapal’s old seat, seeking to allay concern about how the Taliban will rule.

“All those on the opposite side are pardoned from A to Z,” said Mujahid as he fielded questions from the remnants of the Afghan press corps.

“We will not seek revenge.”

For years, there was a debate as to whether Mujahid was even a single person — his moniker serving as cover for the Taliban’s sprawling information wing.

But Mujahid was real and relaxed in his public debut, delivering assurances in a live broadcast on behalf of a group that once banned television.

When asked if the Taliban expected to be forgiven following their brutal campaign of violence that brought death and destruction to Afghan cities, Mujahid did not sidestep.

The losses, however devastating, were worth it, he argued.

“A huge occupying force was defeated,” he explained.

Notorious for banning TV and radio under their iron-fisted rule in the 1990s, the Taliban have adapted to the ever-changing nature of modern media and deftly used it to their advantage.

“The Taliban understand that the information war is modern warfare,” wrote Richard Stengel — a former under secretary of state for the Obama administration — in a New York Times editorial.

“They are not trying to build a new platform; they´re trying to integrate into and dominate the existing landscape.”

Mujahid is believed to oversee a vast public relations operation that has coordinated countless press releases, interview requests and questions from journalists in recent years.

Outside of his social media presence, Mujahid and his team also managed an impressive network of WhatsApp groups, where they delivered real time updates directly to journalists.

Little is known about the spokesman’s past roles in the movement, but his impact on their string of victories has been monumental even as other spokesmen emerged and took on more public roles from the Taliban’s political office in Doha.

Under Mujahid’s leadership, the Taliban effectively owned the battlefield narrative during the group’s final offensive this summer, providing detailed sketches of its fighters’ movements as the Afghan government stayed largely silent.

The Taliban’s victory appeared all but inevitable, according to the narrative presented by the Taliban press office, as government forces surrendered en masse often without a shot fired.

During the last 10 days of the war, Mujahid would announce the fall of every new city to the Taliban with a tweet, becoming the de-facto minister of information of the conflict that his group was winning rapidly.

Now in power, Mujahid will be faced with a new task — convincing Afghans and the international community that the Taliban are able to transition from fighting to governing.

“All issues can be resolved with talks,” Mujahid told reporters Tuesday.

“We give our brothers reassurances. We have the same country and the same goals.”