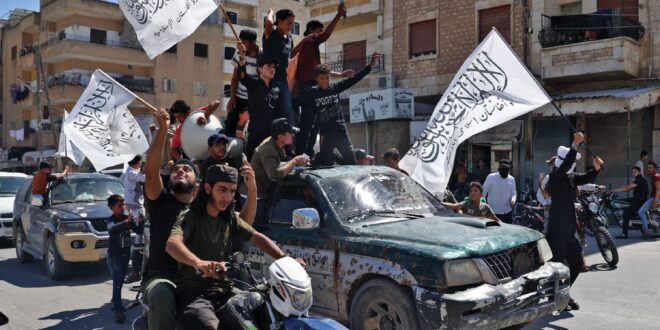 Hay’at Tahrir al-Sham forced locals in Idleb to celebrate the victory of the Taliban in Afghanistan, sparking the anger of citizens, according to al-Watan.

Hay’at Tahrir al-Sham (HTS) adopted the “victory” for the Taliban movement in its control of Afghanistan, by continuing celebrations in support of al-Fateh al-Mubeen and issuing a statement considered as a ” pledge of allegiance” to the radical Islamist movement’s approach. These events provoked a wave of discontent and indignation among the local population in Idleb, where the Syrian branch of al-Qaeda rules its hegemony.

Civil sources in the city of Idleb told al-Watan that the celebrations of the movement’s “achievement” continued yesterday. These celebrations took place for the fifth consecutive day through rallies in four-wheel-drive vehicles bearing the banners of Al-Nusra, Tahrir al-Sham, and Al-Qaeda. They broadcast, through loudspeakers, enthusiastic jihadi songs. This comes amid demands by some radical leaders to announce the return of disengagement from al-Qaeda and the declaration of affiliation and allegiance to it explicitly and clearly, after its shares, power, and influence became widespread in Afghanistan.

Local sources in the governorate indicated that HTS forced the people to celebrate the Taliban’s takeover of Afghanistan. They continued distributing sweets, holding banquets, and opening guesthouses in front of the terrorists to show loyalty to militant organizations, notably al-Qaeda.

The activists pointed out that there are serious concerns among Ankara’s militias regarding al-Nusra’s position. These concerns revolve around al-Nusra’s intransigence and being dragged behind its al-Qaeda brothers in Afghanistan with the Russian-Turkish bilateral agreements. These include the Moscow and Sochi agreements, and even the resolutions of the Astana process, which are unstable. This will lead to a grinding war in de-escalation zones which will not be in the interest of Erdogan’s militias and al-Qaeda loyalists.