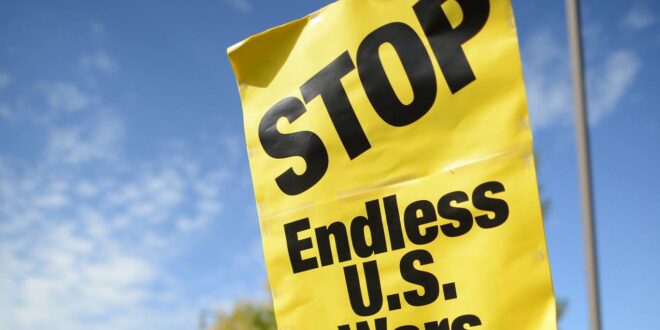 Afghanistan and the Propaganda of Infinite War

The U.S. withdrawal from Afghanistan and the Taliban’s re-ascendance are producing some incredible lamentations about the decline of American power. This apprehensiveness about withdrawal is premised on the belief that the U.S. acts as a force for good and is vital to the effort to defeat the scourge of global terrorism. This is familiar ground for anyone who’s been paying attention to the foreign policy rhetoric of Democratic and Republican officials over the last two decades.

In their classic book, Manufacturing Consent, Edward Herman and Noam Chomsky argued that the core of propagandistic political discourse in liberal societies is the presupposition of journalists and political elites that political debates must proceed within the ideological parameters established by the two major parties. Views that exist outside of the spectrum of positions embraced by the major parties are deemed extreme, exotic, or beyond the pale, and are blacklisted from consideration in mainstream media and political discourse. Such has been the case with those who challenge the notion that U.S. military power is vital to promoting peace and stability throughout the world.

As the U.S. removes its last troops from Afghanistan, concluding a presence that is now 20 years in the making, the spectrum of views that’s dominated U.S. discourse ranges from the hawkish Republican notion that Democratic President Joe Biden is a shell of a leader who is weak on terrorism, to the liberal notion that the war in Afghanistan is a lost cause, and that it’s time for the U.S. to end its commitment there and reengage with its allies through new multilateral alliances that will combat terrorism in smarter, more productive ways.

On the hawkish front, former President Donald Trump attacks Biden by referring to the Taliban’s takeover and the U.S. withdrawal as “one of the greatest defeats in American history.” Trump also announces: “It is time for Joe Biden to resign in disgrace for what he has allowed to happen in Afghanistan.” This is quite an Orwellian statement for the former President, who just months before the 2020 election was boasting about his “historic peace agreement” with the Taliban that was central to “bringing peace” to the region. Trump’s campaign went out of its way to contrast him with his electoral competitor, announcing that, “while President Trump has championed peace, Joe Biden has taken the lead in pushing for endless wars.”

In a supremely cynical act of Orwellian deception, the GOP rushed to take down Trump’s boastful celebration of his Taliban deal from the Republican National Committee’s webpage. Yesterday’s promise to extricate the U.S. from its endless wars was tossed down Orwell’s memory hole as the former President seized on today’s opportunity to drum up support from his hawkish base for continued wars in the Middle East and Central Asia. These are wars, by the way, that Trump and his supporters have always embraced – contrary to the absurdist propaganda claim that they are motivated by anti-militarism and opposition to U.S. empire.

Reflecting the liberal position on the Afghan war in favor of drawdown, the Biden administration, per CNN reporting, argued that the U.S. “anti-terror mission in Afghanistan was achieved a decade ago – when American troops killed Al Qaeda leader Osama bin Laden.” Reinforcing the liberal position, the administration was critical of open-ended military engagements in the “War on Terror,” as reflected in this excerpt from the Daily Beast:

This is quite a slick propaganda message – the kind that will leave liberals with goosebumps by revealing the “wise” restraint of a commander in chief committed to limiting the application of military power – and with Biden recognizing the dangers of American “hubris,” “recklessness,” and “excesses” in an era of endless militarism. The notion that the U.S. has succumbed to “dangerous delusions” will no doubt appeal to many liberals and lefties, particularly the critical reference to “American exceptionalism” at a time when most of the public suffers from war burnout and suspicion of open-ended military engagements. But this sort of rhetoric is also difficult to take seriously considering Biden’s FY 2022 proposed Pentagon budget of $715 billion, which represents a slight increase from the spending levels in Trump’s last year in office.

The U.S. may be extricating itself from Afghanistan, but there is little indication that the war machine is slowing down. Rather, the Biden administration’s rhetoric on Afghanistan largely reflects a reorienting of U.S. foreign policy toward the liberal ideological goals of previous administrations, which see open-ended unilateral military engagements as reckless, costly, unsustainable, and unworthy of Democrats’ support.

Outside of Democratic and Republican officials’ angling, reporting in the “agenda setting” press has straddled the line between concerns with “fighting terrorism” and interest in maintaining support from U.S. allies. Speaking to both of these concerns, The New York Times reports that:

CNN echoes this concern with rising extremism, warning in one headline that: “Afghan withdrawal leaves allies to face harsh reality of U.S.’s departure from world stage.” CNN goes further, tying its suspicion of U.S. withdrawal to the language of international law, and reporting that critics of the U.S. worry about “America’s retreat from the world stage” and the United States’ commitment under the U.N. Charter “To maintain international peace and security, and to that end…to take effective collective measures for the prevention and removal of threats to the peace.”

There is more than a bit of Orwellian doublethink propaganda in this statement, particularly in the assumption that a continuation of U.S. militarism and war in Afghanistan is vital to promoting “peace” in Central Asia. Of course, Orwellian propaganda is a longstanding feature of U.S. discourse on Afghanistan. For example, when the Obama administration was asked in 2009 why it needed 100,000 troops in the country to combat Al Qaeda when U.S. intelligence estimated that the group had perhaps 100 fighters in the country, the response from U.S. Ambassador to the U.N. Susan Rice was that the U.S. couldn’t “afford” to allow a Taliban resurgence, for fear that its rise to power might one day provide Al Qaeda or other extremist groups a safe haven in Afghanistan. By this logic, the U.S. must remain committed to a permanent occupation of the country, so long as extremism and terrorism exist in the region, and so long as the Taliban exists and is a threat to taking over the nation. And with this admission, Americans were sold a vision for an Orwellian commitment to infinite war, with the U.S. portrayed – like the government of Oceania in the propaganda from 1984 – as a stabilizing power committed to permanent war in the name of peace.

Effective propaganda commonly relies on elements of truth. And with Afghanistan, that truth relates to the brutality that is likely to follow U.S. withdrawal in the face of the Taliban’s repression. The Taliban is notorious for its suppression of women, its contempt for democracy, its sheltering of religious extremists, and its horrific treatment of ethnic minorities. So it’s no stretch of the imagination to say that the group’s rise will have dire consequences for the people of Afghanistan. After 20 years of the Afghan people being stuck between a U.S. client regime with little popular supportand a fundamentalist repressive Taliban movement, there’s no positive endgame that’s likely to emerge as the U.S. withdraws from the country.

Still, it’s possible to recognize the Taliban’s brutality, while also raising serious questions about the United States’ own impact on the region. But those questions are being omitted from mainstream media discourse because they fall outside the bi-partisan spectrum of views embraced by Democratic and Republican officials. One such question we might be asking: to what extent do Americans think of the U.S. military commitment in Afghanistan as morally indefensible? This question was last polled in 2009, at the height of the Obama administration’s “surge” of U.S. troops, when a sizable third of Americans (35 percent) in December of that year agreed that “the United States’ action[s]” in Afghanistan were “not morally justified” [1]. We might speculate that this opposition increased after 2009 as the popularity of the war waned, although it’s impossible to know for sure since pollsters failed to follow up on this question.

Other polling provides a more definitive understanding of mass public opposition to the “War on Terror” and the intervention in Afghanistan. A 2016 poll from The Chicago Council on Global Affairs finds that 42 percent of Americans felt that the U.S. was “less safe” “as a country” by the mid-2010s – after 15 years of war – than it was prior to the September 11, 2001 terrorist attacks, compared to 41 percent who felt “about as safe” as before 9/11. After spending trillions of dollars on war, and with thousands of U.S. lives lost on the battlefields in Afghanistan and Iraq, just 17 percent of the U.S. population said they felt “more safe” by 2016 than they did in the pre-9/11 era [2]. In a 2019 Gallup poll, 46 percent of Americans said that “the war with Afghanistan” had made them feel “less safe from terrorism,” compared to 43 percent who felt it made them feel “safer.” These are damning findings, casting doubt on the legitimacy of U.S. wars, and revealing a population that is deeply split about whether the conflict in Afghanistan even accomplished its most basic goal of protecting the nation, with only a small minority of Americans agreeing that the “War on Terror” made them feel safer.

Despite the fundamental suspicions held by a large segment of the public, the willingness to cast aside old dogmas and faith about the U.S. “stabilizing” the world and promoting “peace” and “safety” through war is difficult for many to let go. This much is clear when we look at the incredible popularity of hegemonic propaganda narratives among officials and journalists, with prevailing hawkish and liberal rhetoric that envisions the U.S. as a benevolent actor in the “War on Terror.” Many Americans continue to embrace this propaganda, with a Morning Consult/Politico poll from mid-August showing a divide in public opinion on Afghanistan, with 49 percent of U.S. voters supporting the U.S. withdrawal – a sizable decline of 20 percentage points (down from 69 percent) from April of this year – and with 45 percent opposed to withdrawal. This split speaks to the ambivalence of a public in which millions continue to indulge in official propaganda narratives celebrating U.S. militarism as a force for good and peace, and with millions more tiring of the endless wars that have left them weary of the promise that “victory” and “safety” are just one more troop surge or intervention away.