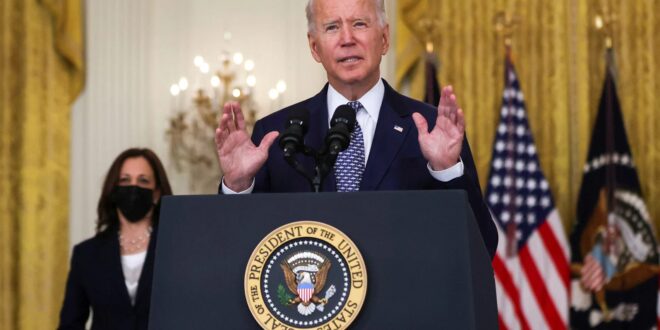 Our nightmarish exit from Afghanistan got worse on Thursday when a suicide attack at the Kabul airport killed 13 U.S. troops, as well as dozens of Afghan civilians.

It was the heaviest combat loss for the U.S. since the downing of a Chinook helicopter in Afghanistan a decade ago.

Prior to Thursday, we hadn’t lost anyone in combat in Afghanistan since February 2020.

The attack was awful, but not surprising given that President Biden had outsourced external security at the airport to the Taliban, and the chaos and the crowds — often waiting outside the gates for days — inevitably made for an inviting target.

The ISIS offshoot in Afghanistan and Pakistan, so-called ISIS-K, a truly heinous and remorseless group of killers, claimed responsibility. It and the Taliban have fought one another, but there have also been suggestions that Taliban forces have used ISIS-K as a cut-out for their own attacks. Nonetheless, the U.S. military says that there is no indication that the Taliban were complicit.

A sensible approach to the attack would be to make our presence in Kabul more muscular to provide for more security for our forces and for evacuees. We should retake Bagram Air Base or an equivalent facility that would be much easier to defend than Kabul airport and use it to provide air cover for our operations. We should explain to the Taliban that, given the disruption from the attack and given their obstruction of Afghan allies (and sometimes Americans) at the airport, we haven’t been able to evacuate everyone we need to and we are staying until we do. We should run missions to pick up Americans and legal residents, as well as SIVs. And, even if we can’t yet identify those directly responsible for the Thursday attack, we should target ISIS-K leaders.

This tack would have the advantage of sending the message that we aren’t rushing out of Afghanistan under fire, of fulfilling our moral obligation to our countrymen and closest allies, and of making it clear that harming our troops is intolerable.

It wouldn’t be without risk, but, as we’ve seen, adopting a defensive crouch and relying on the Taliban for our security also is not without risk.

Biden, of course, shows no inclination to change. He said the right things about tracking down the ISIS-K killers, but, soon enough, we won’t be in the country, or anywhere in the vicinity, to do it.

He spoke of completing the mission, which he essentially defines as leaving by August 31 no matter what. It seems likely that the aperture for Americans and Afghans to get through to the airport is going to get even smaller and that, if we really are going to remove our 6,000 troops by this coming Tuesday, the focus will have to shift within days to that part of the operation rather than processing evacuees.

After all the brave assurances about getting everyone out, Biden implicitly acknowledged yesterday that it isn’t going to happen. “We will continue after our troops are withdrawn,” he said, “to find means by which we can find any American who wishes to get out of Afghanistan.” He ventured, absurdly, that he knows of no conflict where one side has been able to extract everyone it would like from another country.

Secretary of State Antony Blinken said yesterday that the Taliban have made commitments to permit safe passage of Americans, foreign nationals, and “Afghans at risk” past August 31. Since these Afghans are at risk from the Taliban, this commitment doesn’t seem worth much, not to mention the Taliban have already been blocking Afghans at the airport. There is also a good chance that the security situation is going to deteriorate further, and there’s no guarantee that the airport will even be operating after we are gone.

The Biden team, nonetheless, is treating the Taliban as a trusted partner, even though they have never broken their relationship with al-Qaeda and even though the Haqqani network, a key player in the Taliban, is closely allied with the terror group.

An astonishing report in Politico says that we provided names to the Taliban of Americans, green-card holders, and Afghan allies whom we wanted to get through to the airport. An outraged defense official referred to the names as basically “a kill list.” Asked about the report at his press conference, Biden said we have occasionally given the Taliban a list of people on, say, a bus we want to get through, but otherwise pleaded ignorance.

We’ve been dependent on the Taliban the last two weeks, and the Biden plan is to become even more dependent on them after August 31. His approach joins fecklessness with dishonor, and we may yet pay an even steeper price for it.

Post Views: 41
Previous Afghanistan and the Propaganda of Infinite War
Next Why Exactly Did We Abandon Bagram Air Base?