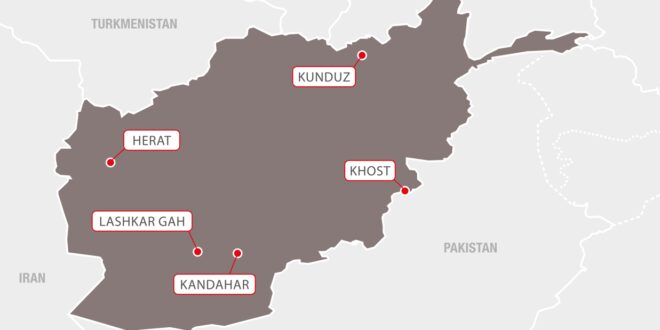 In the wake of intense fighting and the rapid transfer of power to the Islamic Emirate of Afghanistan (also known as the Taliban), people are facing widespread instability, mass displacement, and the disruption of basic services, including health care. Despite the challenges, Doctors Without Borders/Médecins Sans Frontières (MSF) teams continue to provide essential medical care across all five of our projects in Afghanistan—in Herat, Helmand, Kandahar, Khost, and Kunduz provinces. Here, two medical staff members working in Lashkar Gah (Helmand province) and Khost city describe the recent changes they have witnessed, and how they have affected patients and health care providers alike.

Names withheld to protect anonymity.
Lashkar Gah: “We are receiving over 700 patients a day in our emergency room”

Relative calm has returned to Lashkar Gah, Helmand province, but anxiety and uncertainty linger. Many people who delayed seeking medical care during the fighting are now coming to the Boost provincial hospital, which is supported by MSF. Over the past few days, the emergency room has been full.

Many patients are suffering from respiratory illnesses, gastrointestinal problems, and trauma-related injuries sustained in the fighting and road traffic accidents. From August 15 to 21, more than 3,600 people were treated in the emergency room, and 415 were admitted to the hospital. Here, a medic working at Boost hospital shares their experience.

“On August 1, I came to Boost provincial hospital in Lashkar Gah and spent thirteen days working there. The medical needs were very high. We received a lot of patients wounded in the fighting. But most of our regular patients … stayed away because access to the hospital was at times made impossible by the conflict. [Before the fighting, the hospital saw around 500 people a day, including sick children, pregnant women, and patients in need of routine surgical care.]

Our staff had little rest. When patients came in, we would wake up and run to the emergency room. We stayed in the hospital to treat our patients. It was very dangerous outside.

After the fighting ended on August 13, we stopped hearing the heavy sounds of airstrikes, rockets, and mortars. The roads in the city and in the surrounding districts are open, and people are once again coming to the hospital. Patient numbers have increased tremendously.

For the last week or so, we are receiving over 700 patients a day in our emergency room, sometimes more than 800. On August 21, we treated 862 people, which I think is the most we’ve ever received. Some patients are coming in critical condition because they waited until the fighting had stopped.

One reason we are seeing this huge number of patients at our hospital is, I think, because other local clinics are not able to meet the needs of the people. We send around 200 less-critical patients to these clinics each day, but many come back reporting that the clinics don’t have the drugs they need or that they are closed due to a shortage of staff.

They are waiting a long time in the emergency room while we try to find space. We have two patients to a bed in the pediatric ward, but we are still struggling to find room for everyone. So we assess the severity of each patient’s condition, because the more severe things are the more they need admitting.

Each day, between 80 and 100 of the people we assess have severe enough conditions that they must be treated as inpatients in the hospital. This forces us to discharge other patients to make room for them. This is one of the big challenges at the moment.

I don’t know how we can solve it in the long term, but for now we are decreasing the length of stay and discharging [people] with the medicine they need unless they are in a very critical state. Our intensive care unit is also full. All the districts are now open, so that’s another reason we are receiving so many patients, as they are coming from outside the city.”
Khost: “People are facing so much uncertainty, especially pregnant women”

In Khost, MSF runs a maternity hospital and supports eight comprehensive health centers in rural areas. From August 15 to 22, 402 pregnant women were admitted and 338 babies were delivered. Thirty-three babies were treated in the hospital’s neonatal ward. Here, a medic working in the hospital shares their experience.

“Although the city of Khost didn’t experience the heavy fighting seen in other places, we are facing tough times. Markets, local transport systems, and most private clinics are closed. People’s access to health care is now very limited. A single delivery in a private clinic can cost 3,000 to 5,000 Afghani [35 to 60 US dollars], which is adding extra pressure on the families.

People are facing so much uncertainty, especially pregnant women. They try to save money and, since MSF offers its services for free, many pregnant women are coming to the MSF maternity hospital in Khost.

Previously, MSF’s maternity hospital in Khost had focused on providing medical care to pregnant women who were facing complications. However, to increase access to health care for the community, we widened our admission criteria and now give medical care to any pregnant woman to help them give birth.

Local organizations we work with are telling us about the difficulty in accessing health care facing remote communities. The transport system isn’t fully functioning, and we are worried about breaks in the supply chains for essential, lifesaving medications.

In spite of these challenges, MSF is committed to continuing our medical activities and to meeting the health needs of mothers and children in conflict-affected communities.”

MSF teams continue to provide medical care across all five of our projects in Afghanistan: in Herat, Helmand, Kandahar, Khost, and Kunduz provinces. Sustaining these health services under extreme pressures is a testament to the dedication of the 2,300 MSF staff members working in the country. Since the end of the fighting we have seen a change in the needs that people present within our projects, and many of our facilities are now full. We are seeing people who were injured in the fighting and require follow up-care, as well as patients with a variety of health conditions who now find it safer to travel to access medical care.

In Herat, MSF provides outpatient care, treatment for noncommunicable diseases, and sexual and reproductive health care in the Kahdestan clinic. We have seen an increase in patients as other clinics in the area have suspended activities. The MSF-run inpatient therapeutic feeding center (ITFC) at Herat Regional Hospital is receiving a growing number of malnourished children, a 36 percent increase over last week. The third wave of COVID-19 is evidently on a downward trend, with MSF screening fewer possible COVID-19 patients. Only a small number of patients were referred to our COVID-19 treatment center, as we are seeing fewer severe cases in need of oxygen treatment.

During the fighting, MSF was able to continue its care for drug-resistant tuberculosis (DR-TB) outpatients by providing remote consultations and buffer stocks of medication to keep them from having to cross front lines to access care. TB care continues today and we have a small number of inpatients in our DR-TB center. At Mirwais Regional Hospital, MSF is screening patients for TB.

The Haji camp, where some 5,000 displaced people had been staying, is now largely empty. MSF has closed its temporary primary health clinic there.

MSF activities continue in the Khost maternity hospital. Despite the end of the conflict which, except for clashes in peripheral districts, was resolved through negotiations in Khost province, markets, local transportation systems, and many private clinics are not fully functioning. Some people gave birth at home over the last week or so, sometimes because they were unsure if health facilities were still open.

The situation in Kunduz is calm, though the city is more empty than before. On Monday, August 16, we moved all our patients from the 25-bed Kunduz Emergency Trauma Unit (KETU) that was set up in our office space during the heaviest fighting to the new Kunduz Trauma Center (KTC), which had been under construction since 2018. The KTC opened with 30 beds initially and one operating theater.

We are now mostly seeing people injured in road traffic accidents and people wounded by the fighting who are suffering from complications. Since some people fled and then returned to Kunduz, MSF medics are treating patients who were first treated in other hospitals, which can sometimes complicate further care.

Many people injured in road traffic accidents suffered head trauma injuries, but we do not currently have the capacity to provide neurosurgery. The facilities in the region that would normally provide these services are not yet back up and running, a stark illustration of the longstanding gaps in health care that have been exacerbated by the recent upheaval.

The situation in Lashkar Gah is now calm, and many people who delayed seeking medical help amid active fighting are now coming for care. Over the past few days, the emergency room has been full, with many people presenting with respiratory or gastrointestinal problems and trauma-related injuries related to the fighting and road traffic accidents.

MSF is a medical humanitarian organization operating under the principles of independence, impartiality, and neutrality. Since the 1980s, MSF has provided medical care throughout Afghanistan in areas under the control of a variety of political and armed factions. In Afghanistan, MSF relies solely on private funding and does not accept funds from any government for its work.

Post Views: 152
Previous With the Taliban Back in Kabul, Regional Powers Watch and Wait
Next Iran-Afghan trade has murky future under Taliban