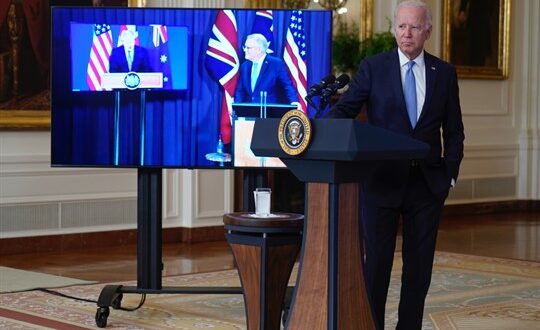 The AUKUS Deal’s Implications for China

Last Wednesday, the Biden administration unveiled a historic security partnership in the Indo-Pacific region between the U.S., Australia and the U.K., known as AUKUS. As part of the deal’s terms and conditions, the United States and the United Kingdom will help Australia build and deploy nuclear-powered submarines, as well as share and cooperate on other technologies, such as cyber, artificial intelligence and quantum computing. “This is about investing in our greatest source of strength—our alliances—and updating them to better meet the threats of today and tomorrow,” said U.S. President Joe Biden in a joint virtual announcement ceremony with Australian Prime Minister Scott Morrison and his British counterpart Boris Johnson.

Though none of the leaders explicitly mentioned China or spelled out what “threats” they were responding to, China was clearly the elephant in the room. The AUKUS initiative begins with an 18-month consultation period to determine details of the submarine program and tackle other regulatory, technical and security hurdles. By 2040, Australia’s fleet of at least eight nuclear-powered submarines could patrol the South China Sea, where China has staked its claim to a vast area within the controversial “nine-dash line,” a unilateral and unrecognized demarcation of what Beijing portrays as its historical claims to the waters.

Both Morrison and Biden stressed that the submarines will not be armed with nuclear weapons, merely powered by nuclear reactors. But nuclear-powered submarines alone are potent platforms with strong offensive and defensive capabilities, especially because they are extremely difficult to detect. With only six countries in the world possessing them, they are a significant addition to Australia’s military arsenal.

The acquisition is a response to China’s assertive behavior and growing military capabilities in recent years, Peter Jennings, the head of the Australian Strategic Policy Institute think tank, told the Associated Press. “We should call the first submarine in this new category the ‘Xi Jinping,’ because no person is more responsible for Australia going down this track than the current leader of the Chinese Communist Party,” Jennings said.

The AUKUS partnership also signals a shift in strategy for Australia, whose diplomatic rows with Beijing have resulted in Chinese reprisals in the form of coercive trade restrictions in the past year. The newly formed security pact effectively means Canberra has formally taken sides with the U.S. against China. “It is a ‘big deal’ because this really shows that all three nations are drawing a line in the sand to … counter the Chinese Communist Party’s aggressive moves in the Indo-Pacific,” Guy Boekenstein, senior director of defense and national security at Australia’s Northern Territory government, told the BBC.

China has predictably railed against the partnership, criticizing it as “extremely irresponsible.” The U.S. and the U.K. are “using nuclear exports as a tool for geopolitical game and adopting double standards,” said Chinese Foreign Ministry spokesperson Zhao Lijian in a press briefing last Thursday. The alliance “has seriously undermined regional peace and stability, aggravated the arms race and hurt international non-proliferation efforts,” he added.

But China is not the only country that is upset with the turn of events in the Pacific. The partnership has led to an unexpected diplomatic spat between the Anglosphere allies and France, which recalled its ambassadors from the U.S. and Australia, after Canberra reneged on a $40 billion deal from 2016 to purchase 12 conventionally powered submarines. Speaking to a local radio station, French Foreign Minister Jean-Yves Le Drian slammed the pact as “a stab in the back,” saying that France had “built a relationship of trust with Australia, and this trust was betrayed.”

The new defense pact highlights the swiftness of China’s rise as a world power, but also raises important questions about the ability of Western allies to remain united when their economic interests diverge. Defending the decision to ditch France for the AUKUS arrangement, Morrison attributed the acquisition of nuclear submarines to “a changed strategic environment” and new security needs. The Biden administration continues to find ways to mend fences with Paris.

Meanwhile, in the aftermath of the AUKUS announcement, China made a big strategic move of its own, formally applying to join the 11-nation Comprehensive and Progressive Agreement for Trans-Pacific Partnership, or CPTPP. That trade pact evolved from the Trans-Pacific Partnership signed by the U.S. and the 11 current CPTPP countries under former U.S. President Barack Obama, which his successor, Donald Trump, withdrew from. In the short term, it is unlikely that China’s bid to join the CPTPP will succeed, as the agreement was initially formed to counter Beijing’s influence. Moreover, China would struggle to meet commitment levels in terms of subsidies and state-owned enterprises. Yet, as Wendy Cutler, vice president of Asia Society Policy Institute told The Wall Street Journal, “China has nothing to lose by expressing its interest in joining the CPTPP agreement, but a lot to gain.”
In Other News

The Chinese government will take control of the ride-hailing giant Didi and install new management at the company, Reuters reported. Didi co-founder and President Jean Liu has reportedly told some close associates of her plans to step down, while company executives are being encouraged to look for other job opportunities. Didi has since denied the report and threatened to take legal action against “malicious” rumors. But the report points to the dilemma faced by many other top Chinese business executives, who are struggling to steer their companies through Beijing’s broad regulatory crackdowns.

In yet another blow to the faltering #MeToo movement in China, a Beijing court has dismissed a landmark sexual assault case brought against a prominent television personality by 28-year-old Zhou Xiaoxuan, citing insufficient evidence. Zhou, also known as Xianzi, had accused Zhu Jun of groping and forcibly kissing her in 2014, when she was an intern at the state broadcaster CCTV. Speaking to the crowd outside the court, Zhou vowed to appeal the ruling, but also admitted that the ordeal has taken an emotional toll on her. Chinese social media platforms have since censored comments supportive of Zhou and suspended accounts that advocated for women’s rights. “The authorities know there will be backlash, and they cannot face the real reaction of the public,” Lu Pin, founding editor of Feminist Voices, told The Washington Post.
Worth a Read

In a rare break with professional protocol, an anonymous Hong Kong judge has broken silence and criticized the first conviction handed down under the city’s new national security law as “unfair.” Speaking to Holmes Chan of Vice World News, the judge sarcastically described 24-year-old Tong Ying Kit as the “most benevolent terrorist in the world” and expressed pessimism over the prospects for Hong Kong’s tradition of judicial independence. After a trial without a jury, Tong was sentenced in July by three designated national security judges to nine years imprisonment for inciting secession and terrorist activities. In July 2020, he collided with police officers while riding a motorcycle that displayed a flag with a protest slogan. The court spent a lengthy part of the trial debating the meaning of the slogan. As Chan asked in the article, “Was Tong being judged for his own actions, or was he somehow answering for things far larger than himself?”

Post Views: 89
Previous Behind the Scenes of the Taliban’s Internal Power Struggle
Next Australia Can’t Get By on Nuclear Subs Alone