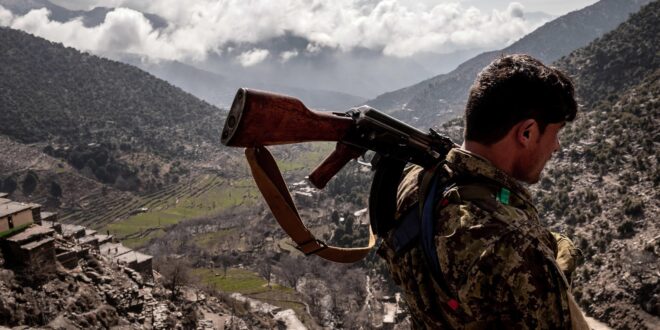 Last month’s bombing outside the Kabul airport was a devastating sign of the Islamic State of Khorasan Province’s (IS-K) recent resurgence. The group had already launched 77 attacks in the first four months of 2021 — an increase from 21 in the same period last year. This renewed capacity for mass-casualty attacks could further destabilize Afghanistan’s already precarious security situation, leaving both the new Taliban government and the United States with a vested interest in mounting an effective campaign to undercut IS-K’s presence in the region.

USIP’s Asfandyar Mir delves into the origins and goals of IS-K, their hostile relationship with the Taliban, how the Taliban’s sudden takeover might affect the group’s trajectory and the U.S. policy options available to combat terror threats in Afghanistan post-troop withdrawal.
Who is IS-K? What are its aims and tactics?

IS-K (also referred to as IS-KP and ISIS-K) is the Afghanistan affiliate of Islamic State in Iraq and Syria (ISIS). It emerged in 2015 after ISIS declared its caliphate in Iraq and Syria. Back then, the group’s aims and declared geography of operations were very broad. Advocating for mass-casualty attacks against civilians and states, the group intended to topple the Pakistani government, punish the Iranian government for being a “vanguard” of Shias, and “purify” Afghanistan — both by dislodging the Afghan Taliban as the main jihadi movement in Afghanistan and punishing minority groups, like the Hazaras.

To this end, IS-K recruited from the infighting-riven Pakistani insurgent group the Tehreek-e-Taliban Pakistan, the weakened al-Qaeda in Afghanistan and Pakistan and the post-Mullah Omar Afghan Taliban. It also tapped into a crucial sectarian minority of Salafis in eastern Afghanistan and leveraged their rural networks to gain territorial control in the provinces of Nangarhar and Kunar.

Over the years, IS-K’s goals have evolved as the U.S. government, the former Afghan government and the Afghan Taliban have all waged military campaigns against it. The group has also adjusted to the political ascendance of the Afghan Taliban. At least since 2017, its anti-Pakistan and anti-Iran priorities have been overtaken by a broad-reaching anti-Taliban and anti-Afghan religious minorities agenda, which have become the centerpiece of its political platform. Today, IS-K’s ultimate strategic end is to establish a “pure” Islamic system in Afghanistan.
What relationship does IS-K have with the Taliban?

IS-K sees the Taliban as an irreconcilable enemy that needs to be militarily defeated. The enmity between the two groups has been aggravated by sustained military hostilities, but the main cause remains their sectarian difference. IS-K subscribes to the Jihadi-Salafism ideology — and plays up the ‘purity’ of its anti-idolatry credentials. The Taliban, on the other hand, subscribe to an alternative Sunni Islamic sectarian school, the Hanafi madhhab, which IS-K regards as deficient. The two groups also differ over the role of nationalism. IS-K fiercely rejects it, which runs counter to the Afghan Taliban’s aims of ruling over Afghanistan.

One recurring question is if the Taliban have used IS-K as a cover for violence, especially in the lead up to their August takeover. The former Afghan government, for instance, would argue that IS-K and the Afghan Taliban — specifically its sub-group the Haqqani Network — were collaborating on violent attacks in cities, but the U.S. government didn’t support this assessment. Recently, President Joe Biden observed that IS-K and the Taliban are “sworn enemies.” The United Nations has also cast doubt on any major strategic alignment between IS-K and the Taliban but suggests the possibility of localized collaboration between elements of the two groups. Some analysts believe that IS-K’s cooptation of Taliban defectors — specifically from the Haqqani Network — contributes to this conflation.
How much of a threat is IS-K in Afghanistan and to the international community?

From 2016 to 2020, IS-K’s overall capacity for violence, political cohesion and territorial influence was weakened by sustained targeting from three sides: the U.S. military, the former Afghan government and the Afghan Taliban. Yet that pressure failed to moderate IS-K’s political goals and civilian targeting.
And since May 2020, current IS-K leader Shahab al-Muhajir has focused on rebuilding the group’s capabilities by forgoing territorial battles and targeting key urban areas, such as Kabul. As a result, the group appears to have resurged.

IS-K currently has a strong local focus, including against the remaining diplomatic and developmental presence of the international community in Afghanistan. The group also appears to want to target Afghans who worked with the U.S. government and others in the international community. This was evident in the August 26 suicide bombing at the Kabul airport, which killed more than 170 civilians and 13 U.S. soldiers.

IS-K’s regional and transnational terrorism ambitions are also concerning. The group has a cadre of foreign fighters from South Asia, the Middle East and parts of Europe. Additionally, IS-K appears to work closely with the al-Sadiq office, ISIS’s node for regional operations that is based in Afghanistan.

Finally, there are indicators that the group has plotted some transnational attacks from Afghanistan. Since 2018, the United Nations has reported the detection of plots in Europe traceable to IS-K. Last year, the German government charged four Tajik nationals for a plot to attack U.S. and NATO military facilities. The German government notes that these individuals were in contact with senior Islamic State leaders, including an IS-K leader in Afghanistan.
What does the Taliban takeover, and the government transition, mean for the terror group?

The Taliban’s takeover brings both opportunity and pressure for IS-K in Afghanistan. On the side of opportunity, IS-K can gain support of anti-Taliban and Taliban-disillusioned Islamist constituencies. For the last few years, IS-K has positioned itself as a Taliban-rejectionist movement by framing the Taliban as craven for allying with Pakistan and being a client of the U.S. government.

With the Taliban back in power — working with Pakistan and, to an extent, with the U.S. government — that messaging could resonate with the Taliban’s Salafi critics, as well as some hardline Taliban commanders.

IS-K could also ramp up violence, allowing it to distinguish itself as the more militant and unrelenting jihadi group in Afghanistan and attract young jihadis.

And a final major opportunity: After the Taliban’s takeover of Afghanistan, most IS-K prisoners were either released or able to flee from various Afghan prisons — and many have plausibly rejoined the group.

Among pressures, the Taliban’s military power is a major constraint facing IS-K. In addition to their own insurgent capabilities, the Taliban have inherited the security institutions and military capabilities of the former Afghan government. With the Taliban consolidating control, IS-K may also face challenges in inducing civilian collaboration and favorable political alignments in parts of eastern Afghanistan, which remain the most favorable terrain for IS-K due to deep Salafi influence.

But the Taliban’s skill as a state-like actor and ability to mount unilateral operations against IS-K is unclear. Until 2019, U.S. air support — combined with Afghan military operations — helped the Taliban target IS-K. This time they will have to act alone, at least in the near-term. Much will depend on how quickly the Taliban learn to police and if they can mount effective counterinsurgency operations.
The United States and the Taliban have worked together in the past to fight IS-K. Can we expect similar coordination in the future?

This is a difficult policy question for the U.S. government. On the one hand, IS-K has regional and transnational terrorism ambitions, due to which the U.S. government has an abiding interest in tracking and containing the group. And since the Taliban also see IS-K as an implacable foe, this creates a narrow alignment of interests between the United States and the Taliban.

On the other hand, the U.S. government is equally — if not more — concerned about the threat posed by terrorist groups which remain aligned with the Taliban, such as al-Qaeda. Any policy option must be mindful of these two competing U.S. counterterrorism interests and how one affects the other.

Previous U.S.-Taliban “cooperation” against IS-K was, at best, tacit. Press reporting suggests that the U.S. military supported the Taliban’s targeting of IS-K without coordinating with the Taliban at a political level. The U.S. military would intercept the Taliban’s radio communications to identify where the Taliban needed help targeting IS-K and synergized the Taliban’s campaign accordingly. Going forward, that type of uncoordinated activity remains one option. However, in the current circumstance, the Taliban may oppose it on grounds of sovereignty violation.

The other option is for the U.S. government to do nothing and let local dynamics play out. The Taliban see IS-K as a major challenge, and they are likely to mount some type of military campaign against IS-K without American prodding or support. For its part, IS-K is gearing up for a campaign against the Taliban.

This option also comes with risks. As the Taliban are new to counterinsurgency, IS-K could make gains against the Taliban, which will improve the group’s ability to project threats in the region and beyond. Moreover, intra-jihadi competition incentivizes outbidding violence. It is plausible that if the fighting escalates, IS-K and al-Qaeda turn to transnational violence in a bid to prove their status as leading jihadi movements. Finally, the Taliban may turn to their militant allies — including al-Qaeda — in such a campaign, raising the capacity of those groups.

U.S. policymakers confront a complicated terrorism landscape in Afghanistan with some tough choices and tradeoffs ahead.