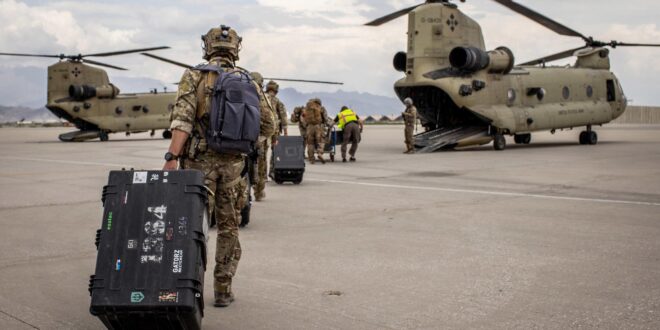 Beijing’s primary focus for now is to ensure stability on its western border and sustain its relationship with the new Taliban government in Kabul.

It has become fashionable to characterize recent events in Afghanistan as a loss for the United States and a win for China. This zero-sum interpretation framed in the narrow context of U.S.-China relations is too simplistic and off the mark. The reality is far more complex and nuanced. The end of the U.S. military presence in Afghanistan and the collapse of that country’s pro-Western government do not automatically translate into significant Chinese gains, nor do they trigger a swift Beijing swoop to fill the vacuum in Kabul left by Washington.

Not a Two-Player Game

For the new Taliban government in Afghanistan, China is not the sole or even most obvious alternative to the United States. Other countries, notably Pakistan and Iran, are major players. Each of these countries has considerable influence in Afghanistan. While Beijing enjoys positive and enduring ties with Islamabad and Tehran, this does not mean China’s priorities and policies vis-à-vis Afghanistan line up perfectly with either one of these states.

Furthermore, the United States has not completely vanished from the scene. Despite suffering a significant setback with the rapid collapse of the U.S.-backed national government and a hasty and ignominious airlift from Kabul, the United States remains enmeshed in Afghanistan in a range of ways and it has publicly committed to continuing to offer humanitarian assistance to the Afghan people. Indeed, the Taliban seems to desire “a good and diplomatic relationship” with the United States. Hence, where Afghanistan is concerned, the United States may be down but is far from out. Moreover, Beijing-Taliban ties are complicated.

Consequently, China is neither the big “winner” in the Afghan debacle nor perfectly poised to become the dominant player in Afghanistan. Contrary to conventional wisdom, the outcome is not a clear victory for Beijing, China is not “ready to step into the void” and Beijing is not destined to be the Taliban’s “main partner.”
China Is Not the Big Winner

The U.S. exit from Afghanistan does not constitute a clear win for China. Although Beijing has always been uneasy about a U.S. military footprint on its western flank, Chinese leaders privately hoped that Washington’s efforts would bring lasting stability to Afghanistan. Today, Beijing views the U.S. exit from Afghanistan with considerable ambivalence. While relieved to see U.S. forces gone from Central Asia, Chinese leaders are fearful of what comes next.

In the immediate aftermath of the Taliban takeover, Chinese Foreign Minister Wang Yi said China desires a “soft landing” for Afghanistan. Wang’s words underscore China’s paramount priority for Afghanistan: stability above all else. What Beijing fears most is a period of uncertainty during which Afghanistan devolves into protracted chaos marked by widespread violence, a humanitarian catastrophe on epic scale and the country emerges once again as an epicenter and proliferator of transnational terrorism and extremism.
What Would Winning in Afghanistan Look Like for China?

China’s bar for success in Afghanistan is quite low. If the new Taliban regime can maintain basic order inside the country and prevent the export of instability beyond its borders, then Beijing will be well satisfied. Yet, Afghanistan could once again become a key node for transnational terrorism and narcotrafficking either in spite of or because of the new government in Kabul. The Taliban, for example, could prove unable to exert effective control over the entire country or, alternatively, intentionally focus on exporting its brand of Islamic fundamentalism through arming and training fighters to infiltrate other countries, including China.

At a minimum, China seeks stability on its westernmost frontier. While China shares a 57-mile border with Afghanistan, the frontier area abuts a remote, rugged and high-altitude locale known as the Wakhan Corridor. Hence, Beijing is less fearful of instability spilling over into China directly from Afghanistan than it is of this occurring indirectly via third countries. Destabilizing Pakistan or Tajikistan would be worrisome in and of itself, but the turmoil could then also spill over into western China. Yet, Beijing’s worst nightmare is that worsening turmoil on the fault line between South and Central Asia could lead to heightened volatility in these neighboring regions and foment greater instability in Xinjiang.
China Is Not Ready to Step into the Void

Beijing’s foremost priority for the near term — certainly into 2022 — is stability and calm domestically and around China’s periphery. Chinese President Xi Jinping and his colleagues want to successfully host the Beijing Winter Olympics next February and preside over a perfectly orchestrated 20th Communist Party Congress next fall.

While China’s mindset is extremely defensive and risk-averse, Beijing is certainly open to expanding its influence and activities in Afghanistan. China has ambitions regarding Afghanistan, but this does not mean these designs are precisely mapped out or involve plans for imminent action.

China’s outward confidence and seemingly purposeful pronouncements in the aftermath of the Taliban takeover and U.S. exit mask a multitude of inner doubts and deeper disquiet. China’s cautious actions belie the veneer of constant self-assurance and periodic bravado.

China has essentially adopted a wait-and-see approach. Xi and his fellow Chinese Communist Party Politburo members are intimately familiar with the challenges of governing a sprawling and populous country. They are also well-aware of the fraught process of transforming an insurgent movement into an administrative apparatus capable of maintaining order and advancing national economic prosperity.
China Is Not the Taliban’s “Main Partner”

Beijing and the Taliban both have good reasons to cooperate, but their partnership will be an uneasy one. Contrary to some predictions, China has yet to extend diplomatic recognition to the Taliban government. Beijing views Afghanistan as a minefield and is not completely comfortable with its new rulers. Although China has a decades-long history of talking to the Taliban and retained its embassy in Kabul as the United States and many other countries pulled out their diplomats and shuttered their missions, Beijing is careful about blundering into a chaotic and volatile situation and will almost certainly proceed with caution when it comes to striking deals with Afghanistan’s new rulers.

While much has been made of China hosting a high-level Taliban delegation in July, this event highlights Beijing’s abiding pragmatism and China’s ongoing efforts to hedge its bets where Afghanistan is concerned rather than signaling a burgeoning alliance. In retrospect, the diplomatic initiative looks to be astute realpolitik, having positioned Beijing to look positively inclined and open to doing business with the new regime.

Yet, China has moved slowly and warily. Although Chinese officials and authorized commentators have suggested that Beijing is ready to step in with substantial aid and economic investment for Afghanistan, no major agreements have been announced, let alone any supplies delivered or investment deals signed. China has promised a modest commitment of some $30 million, but this just a drop in the bucket. Reports swirl that Beijing is in the process of negotiating a deal to occupy the former U.S. air base at Bagram, but so far this is just a rumor.

China is likely to continue its slow pace as it probes the intentions, priorities and disposition of the Taliban government. Moreover, for the foreseeable future, Beijing is likely to judge the new regime by what it doesn’t do rather than what it does. Will the Taliban leave China’s foreign trade and investment interests alone? Will the Taliban refrain from publicly criticizing Beijing’s draconian policies in Xinjiang and demur from providing material support to dissident Uyghur groups? Will the Taliban avoid involvement in narco-trafficking?
China is Not Destined to Become the Taliban’s Partner

China is not the big winner of America’s Afghan debacle. Beijing is not poised to swiftly supplant Washington as the primary patron of Afghanistan’s government. Chinese leaders are not destined to become the Taliban’s main external partner.

In the near term, Beijing’s primary focus vis-à-vis Afghanistan is relatively modest: to ensure stability on its westernmost border, remain engaged in the country and sustain its relationship with the new government in Kabul. To be sure, it is entirely possible that China may eventually increase its presence and/or raise its profile in Afghanistan economically, diplomatically and even militarily. But Beijing will almost certainly proceed with extreme caution. China’s political and military leaders are familiar with the tortured history of successive great powers in Afghanistan and well-aware that the United States is merely the most recent wounded interloper.