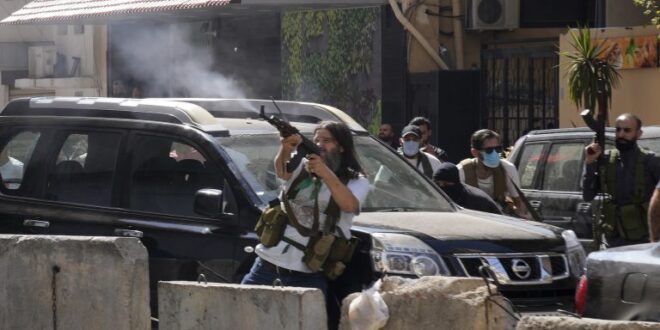 Lebanon is in the throes of what some experts have labeled “state collapse,” as the economy bottoms out and images evoking the country’s fifteen-year civil war play out on television and social media.

“Brain drain” has accelerated, as Lebanese professionals in the medical, finance, and education sectors have looked to move abroad in search of stability and economic opportunities.

While the international community remains focused on the dire situations in Afghanistan, Myanmar, and Yemen, Lebanon remains in a state of durable disorder.

Late last week, deadly clashes erupted in Lebanon, resulting in at least seven dead and thirty wounded. Fighting broke down along sectarian lines, with militia members taking to the streets to fire rocket propelled grenades and automatic weapons at their rivals. The clashes and pitched battles began when supporters of the powerful militia Hezbollah took to the streets to protest the selection of a specific judge appointed to investigate the deadly August 2020 Beirut port explosion, which killed more than 200 people and exposed deep-seated government ineptitude, corruption, and neglect. Another Shia Muslim party, the Amal Movement, joined with Hezbollah members in protests that spiraled out of control, as fighting between Shia and Christian militias raged. The military was eventually deployed to the streets to reimpose control. Lebanon’s President, Michel Aoun, eventually offered public remarks, declaring, “Our country needs calm dialogue, and calm solutions and the respect for our institutions.”

Lebanon is in the throes of what some experts have labeled “state collapse,” as the economy bottoms out and violent images evoking the country’s fifteen year civil war (1975-1990) play out on television and social media. This week, gruesome videos of snipers killing people in the streets flooded the Internet. Over just the past two years, Lebanon’s currency has plunged, down in value approximately 90 percent compared to its value prior to 2019. Fuel shortages and power outages have further contributed to the misery, as the Lebanese state falls short of providing basic goods and services to the population and hospitals being forced to limit or even cease operations. In response to the spreading violence of the past week, schools and businesses were shuttered and people sought refuge in their homes, scared to venture out in public lest they risk being caught in the crossfire. Confidence has ebbed in the ability of the government and security forces to protect the population, which indirectly assists hybrid entitles like Hezbollah. Furthermore, “brain drain” has accelerated, as Lebanese professionals in medical, finance, and education have looked to move abroad in search of stability and economic opportunities.

In addition to its impacts on individual citizens and communities, the economic crisis is impacting Lebanon’s state institutions, including the Lebanese Armed Forces (LAF). The LAF has been facing a financial crisis, its soldiers unable to depend upon regular paychecks from the government in Beirut. This poses drastic risks to the ability of the state to ensure a modicum of law and order in the face of escalating intercommunal unrest and violence. The recent clashes have raised concerns that this could be the beginning of inflamed sectarian tensions that could further polarize an already divided society. In addition to economic woes, Lebanon has been bogged down by a seemingly endless bout of political infighting, leading to near-constant bickering among political elites and non-existent accountability for those tasked with running the day-to-day affairs of the country. Even the Lebanese military’s special forces had to get involved, in order to quell the fighting, establishing check points in an attempt to deescalate the tit-for-tat reprisals.

Compounding the impact of such crises, Lebanon has long hosted large refugee communities; the Palestinians early on and now is home to a Syrian refugee population estimated at 1.5 million. Nine out of ten Syrian refugees in Lebanon now lives in extreme poverty, according to UNHCR, WFP, and UNICEF. Skyrocketing prices preclude sustainable access by refugee communities to shelter and food. As political and economic crises in Lebanon deteriorate for all civilians, so do the exponential impacts on refugees.

The Tayouneh area, where the clashes erupted last week, was one of the primary fault lines in Lebanon’s civil war. Dozens were arrested following the bloody skirmishes. Desperation related to Lebanon’s dire economic situation could prompt recruitment into extremist organizations within the country. Relative calm returned to Beirut following last week’s skirmishes, but the city’s, and indeed the country’s, problems have been laid bare for all to see. While the international community remains focused on dire situations in Afghanistan, Myanmar, and Yemen, Lebanon remains stuck in a state of durable disorder. In the midst of a pervasive economic crisis and escalating sectarian tensions, grave concerns remain about the prospect of collapse of the Lebanese state—a scenario posing disastrous consequences for the country itself and for the region and broader international community.

Post Views: 85
Previous What Can the United Nations Do About Counterterrorism?
Next Key Leader of West African Terrorist Group Is Dead, Nigerian Army Says